Is This Video Of A Creepy, Knife-Wielding Clown Chasing Joggers Real Or Just Another Terrifying Hoax?

With each passing week, the frequency of scary clown sightings seem to be increasing. Now, the general public has essentially reached the point in the Halloween series when people are making light of Michael Myers. What were possibly one or two very real horrifying clown scenarios have spawned an army of copycats and no one knows if this is a joke or if these technicolor terrors are a real threat. One of those red noses is placed upon an evil face, but which one? This is all a joke, right? We shouldn’t be afraid of these clowns, right?!

It’s quite the phenomenon. The masses seem to be perpetuating this urban legend/real life horror movie by documenting/falsifying their own freaky interactions with the clowns. These instances, even if they are fake, are getting the desired reaction, so spooky clowns are popping up more often. Simply put — this is either a serious problem or one of the greatest mass pranks in the history of mankind. But who really wants to take their chances with a sprinting clown wielding a knife?

Now we’ve hit a zenith. Nobody wants to confront a monster clown, nor do they want to be duped by a silly meme.

Please view this graph expertly crafted in MS Paint to get an idea of what we’re dealing with here: 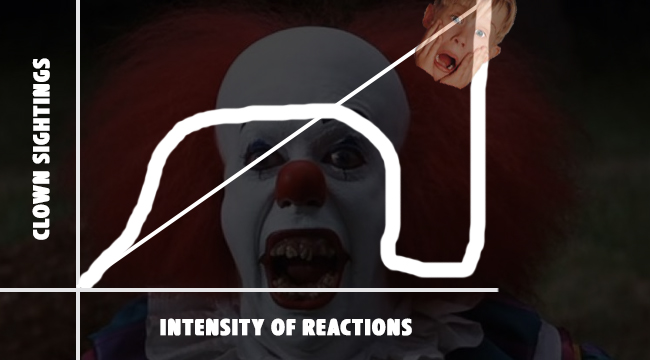 If we’re all brave together, then this will no longer become a thing. But is bravery even possible in the face of a makeup-laden man in a neon costume?*