Former Illinois GOP Congressman turned right-wing radio host Joe Walsh — not to be confused with musician Joe Walsh, who, to our knowledge, has never been accused of being a lunatic or a scumbag — unleashed a fussy Twitter tirade tonight in the wake of the tragic police-officer shootings in Dallas. In a tweet he deleted shortly after posting it, Walsh threatened President Obama and “black lives matter punks” with a race war of sorts, writing, “This is now war…Real America is coming after you.”

Unfortunately for Joe Walsh, the internet remembers everything. You can’t delete things forever, especially insane threats against the president. 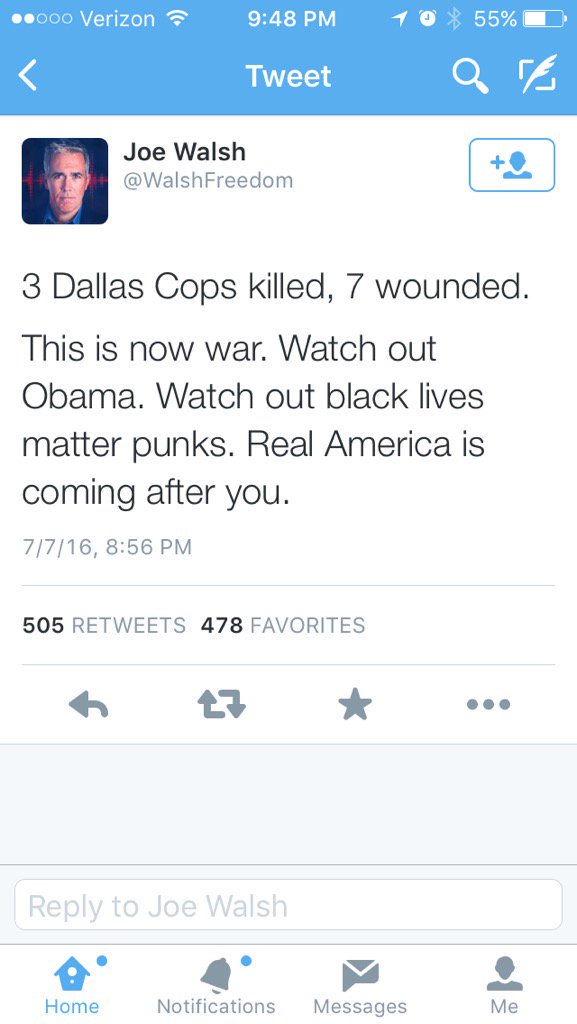 The former Tea Party congressman — whose “personal life” section of his Wikipedia page reads like a Mexican soap-opera character synopsis — was not finished ranting, despite deleting the tweet above.

You did this Obama.

You did this liberals.

You did this #BLM.

Time to defend our Cops. Wake up. https://t.co/Zoc3x2xlMk

He then offered the following clarification…

I wasn't calling for violence, against Obama or anyone. Obama's words & BLM's deeds have gotten cops killed. Time for us to defend our cops.

Joe Walsh should probably prepare for a visit from the Secret Service soon. We hear they enjoy almonds and ginger ale. Stock up!