The Cavs are having a lot of fun right now. Why shouldn’t they be? They’ve won 21 of their last 26 games, have the best record in the NBA since the middle of January, they captured the Central Division title and just locked up the No. 2 seed in the Eastern Conference heading into the playoffs. The trades to bring in Iman Shumpert, Timofey Mozgov and J.R. Smith worked out very nicely during the regular season, and hopes are high that LeBron James can make his return to Cleveland a good one in Year One (Part Deux) as the Cavaliers once again have title aspirations. 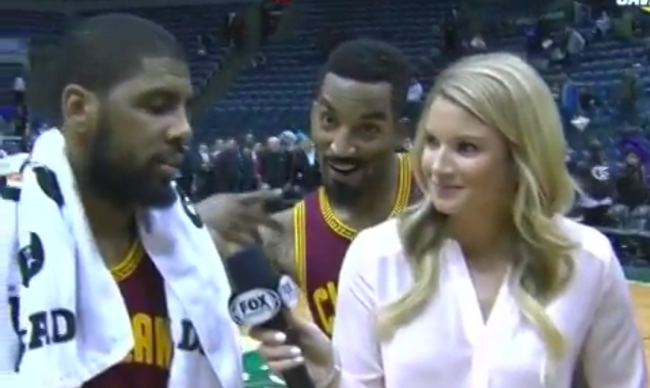 So seeing Smith videobomb Allie Clifton, the Cavaliers’ sideline reporter, after Cleveland beat Milwaukee on Wednesday wasn’t really a surprise. Smith is a walking, talking 100 emoji, and he only recently set the NBA record for most three-point attempts in a game without shooting a two-pointer. This isn’t the first time Clifton has been brought into an inside joke. You may remember Tristan Thompson gave her a kiss on the head earlier in the season.

(Thanks again to my man Vincent Viner for the assist. I wouldn’t be here without you.)