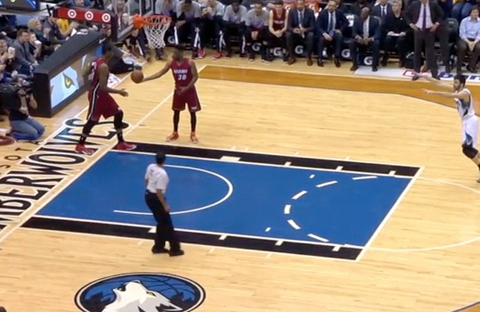 First, let’s give Hassan Whiteside a lot of credit. The surprising former D-Leaguer was 12-for-13 from the field in Minnesota last night for 24 points, 20 rebounds, three steals and two blocks. He was a force, continuing to turn heads after starting the season as an unknown. But at Norris Cole‘s urging, the pair turned the ball over on the inbounds in the last minute without a defender in site.

Let’s set the scene. Kevin Martin knocks down a jumper to give the T-Wolves a 102-101 lead with 39 seconds left. Then, Cole and Whiteside suffer a collective brain fart. Cole passes it in to Whiteside, then takes the ball back and instructs him to get behind the end line again to repeat the procedure. The ball goes out-of-bounds during the exchange, as Ricky Rubio is quick to tell the ref, and it’s Minney’s ball.

What could have possibly led to this mistake? Did Cole think he had failed to pass it in properly the first time? Why would he ask Whiteside to redo the inbounds when there was no whistle after Cole initially passed it in? And the initial inbounds looked fine, too; Cole didn’t step over the end line or anything, and if he had the ref whould have whistled it. There is no whistle, so what the hell are they doing?

Cole could have been unaware he was out of bounds when he passed the ball to Whiteside, and so thought they hadn’t passed the ball in yet. Still, if you look at where they are on the court, it’s pretty obvious.

The mistake wasn’t huge because Kevin Martin missed a three-pointer with 26 seconds left, and Mario Chalmers got a look at a game-winner with six seconds remaining. Chamlers missed too, and Cole got a chance to make up for his mistake after the offensive rebound. But Cole’s three as the clock expired didn’t fall through. Game over, and Minnesota gets just its ninth win of the year.

Norris Cole owes Whiteside — who was credited with the turnover by the scorekeeper — an apology. From where we sit, it was Cole who seemed in a rush to redo the inbounds for no reason we can think of.

Give us one reason why this could have possibly happened?