You may have heard by now that Kylie Jenner inadvertently reignited her feud with Blac Chyna by having the gall to start her own cooking show which is hosted on her members-only website. Because you see, Blac Chyna also hosts a cooking show on social media and has been doing so for several months, and obviously Kylie stole her man and is now trying to take internet cooking shows from her, as well. It’s all very scandalous.

If I sound glib, please take note that I could care less about, nor do I take sides in, this feud, because there is a much greater issue at hand here, and that is: Can Kylie Jenner actually cook? On the menu in the first installment of “Cooking with Kylie” is candied yams. My approach to candied yams has always been just throw some yams and brown sugar and butter and spices and crap into a baking dish and bake until soft. But is there something Kylie knows that the rest of us don’t? Because you actually have to enter in credit card information to view her website, I took one for the team to find out.

Let’s start out by taking a look at her ingredient list:

Can I just say how much I love that Kylie takes care to use only the finest organic ingredient: yams, brown sugar, cinnamon, orange juice, and coconut oil — then tops it off with Jet-Puffed marshmallows and Aunt Jemima? Aunt Jemima is not even maple syrup! Aunt Jemima is a mix of corn syrup, high fructose corn syrup, and a bunch of chemicals and fake coloring — not to mention marshmallows are basically just corn syrup and cornstarch. I don’t understand what the point of all the high end ingredients are if you’re just going to dump a bunch of corn syrup all over everything. That’s like washing a Porsche with diarrhea, something else Kylie Jenner might know about.

Anyway, moving on. After being sure to wash your hands, Kylie walks through how to very gingerly cut your yams into perfect half moons to arrange at the bottom of your baking dish, which she then drizzles with melted coconut oil and orange juice (but not too much!) before delicately sprinkling with brown sugar and cinnamon. These steps are important.

Because this is the next step: 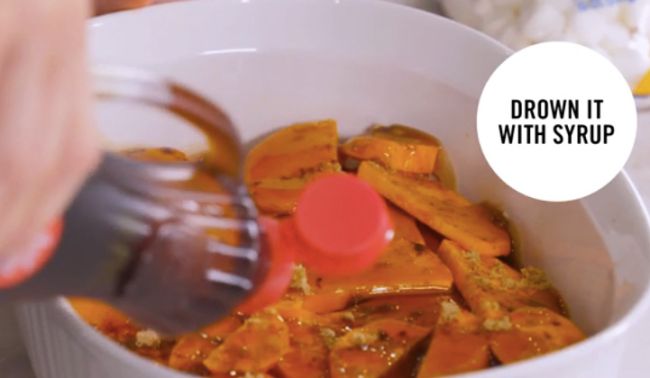 It’s okay, though, because after baking for 45 minutes (and “flipping” the yams halfway in), you’re going to drain off most of that syrup, then sprinkle with more brown sugar and cinnamon, and… oh.

Now that you’re all syrup’ed back up, you’re gonna wanna cover with marshmallows, then throw that sucker back into the oven until the marshmallows start to brown.

Voilà! And that’s how you make candied yams a la Kylie Jenner. So, can she cook? That depends. My takeaway here is that anything covered in enough Aunt Jemima can technically be considered food. So, if you’re actually cooking at a level that Kylie Jenner might actually be able to teach you something, then I guess this might come in handy.

But if your cooking skills really are that poor in the first place (probably because you spend all of your time watching Keeping Up with the Kardashians, am I right?), then honestly… I would just stick to cereal and Hot Pockets. It’s probably safer for everyone that way.