Anyway, this all led to easily the least surprising of all outcomes. Remember that girl who probably shouldn’t have gone home? She’s back! Remember that guy who definitely should’ve gone home multiple times? He’s gone!

That’s right, [SPOILER ALERT] the winner of Last Chance Kitchen was Brooke. Did anyone doubt for a second that Brooke would be back? That was fairly expected and not unpleasant, but I’d be lying if I said I didn’t still miss Jim (aka Truman Compote). That miniature Southern gent is like if a blue bird could cook and wear bow ties.

The finale began in Guadalajara, and the quickfire challenge was to cook some goat in Chivas stadium. A “chivo” being a goat, or at least a young goat, not to be confused with an adult goat, a “cabra,” or a large goat, “cabrón,” which my Mexican high school classmates assured me was a term of great respect. That’s probably why they called me that all the time. Pretty nice, right? It was great to be so well liked.

Anyway, guest judge Francisco Ruano went on and on about how Guadalajara is known for their birria, which is a damned delicious goat stew, and then gave the cheftestants 45 minutes to cook their goat, which is about 12 hours too short to cook birria. I enjoy that food shows always give their contestants way too little time to cook the food they give them and then they’re like “That’s the challenge!”

When what they really mean is “Hey, tick tock, f*ckers. Comfort food schmomfort schmood, we’re paying these cameramen by the hour.”

Then, in the elimination round, the cheftestants headed off to the “Patron Hacienda” for a challenge to create a dish-and-margarita pairing. Damn, a sponsored challenge in the finale? That had to cost a pretty penny. Those deep-pocketed bastards at Patron probably outbid Sammy Hagar on his proposed Cabo Wabo Chiller Challenge. For the best, I’m sure.

In any case it looked like a sick party, but my favorite part was the guy out front doing sweet horse tricks:

It’s not a Mexican party without sweet horse tricks, I always say. Cue my favorite Vine of all time:

The only thing more expected than Brooke winning Last Chance Kitchen was John being the next person kicked off. Let’s remember, this is the guy who beat a black guy during a head-to-head challenge set at a plantation in Episode 1. Say what you will about John and his pop psychology and weaselly strategy and flair for accessorizing, the dude beat some long odds.

Poor John. He opened this week’s show quoting Steely Dan, which was the most precious, perfectly Bangles thing ever. Then after Brooke won the Quickfire, she got to pair the chefs with their sous chef. Yes, the show brought back the last four eliminated contestants for that (Sylva, Emily, Katsuji, and Casey), which they don’t even bother pretending is a surprise anymore.

Naturally Brooke paired John with Katsuji on account of they hate each other. Katsuji didn’t pull anything as epic as his infamous episode 8 slow clap (no one has ever committed to a slow clap so thoroughly as Katsuji), but there was this:

Mostly just John being slimy and ingratiating and Katsuji keeping it super real. Very on brand for both.

Anyway, Bangles spent this episode trying to cook like a local — mention tortas ahogadas during the quickfire? John makes tortas ahogadas. Which is a problem, because John’s from Jersey, and everyone on the East Coast sucks at Mexican food. That’s right, I said it.

The “cocktail” John presented turned out to be straight tequila citroen on the rocks with cherimoya on the rim (courtesy of Katsuji). Which apparently was a fine drink (one thing chefs love? booze) but didn’t go with his caldo de pollo. Like, the drink was good, and the soup was good, but the soup and the drink weren’t good together. Whatever… does anyone else think food/drink pairings are bullshit?

The best part was when John tried to defend his drink using an unsourced quote from an alleged tequila factory worker who supposedly told John that John was the only chef to do right by his brave tequila heritage. Classic politician move, that. “Why, just the other day I was talking to Pete Nagorski, a steel worker from Poughkeepsie, who worries that under my opponent’s plan, he’s not going to be able to afford his meemaw’s medicine…”

But in the end, poor Bangles, champion of the Mexican working class, was eliminated anyway. Of course he was. Guadalajara is landlocked, meaning for once John couldn’t fall back on “this dish was meant to mimic the ocean…”

And so, John heads home, presumably somewhere near the ocean, to spend his days trying to catch wave spray in his mouth like a dog with a sprinkler.

Shirley finishes part one of the finale in a close third, but only after getting hosed twice this week. First, with the 45-minute goat challenge. 45 minutes? How the hell is Hotpot going to make a stew! Shirley says her normal goat prep takes two days, and I would very much like to eat Shirley’s 48-hour goat, whatever it is. Five pepper goat stew with pickled oyster slurry, say.

After that Shirley decided she was going to “go a more Mexican route instead of my usual refined Asian flavors.”

Damn, is that cultural burn? In practice, that seemed to mean Shirley was going to char everything and make a “salsa molcajete,” which for Shirley was more a test of elocution than execution. With Shirley’s accent, is there harder phrase to pronounce than “salsa molcajete?” Points for boldness.

Luckily, it was spicy, so it was in Shirley’s wheelhouse, and Padma loved it, because you know Padma, like-a-the-spice.

That’s Padma’s spicy face. Also, I don’t know if you guys have noticed this, but she’s somewhat attractive.

Unfortunately for Shirley, her sous chef, Sylva, “accidentally” bought her vanilla extract instead of agave nectar (did John pay him off??). But then it was no one’s fault but Shirley’s when she used it anyway, trying to convince herself it was a happy accident. Come on, Shirley, no one wants accidental vanilla! Just ask my parole officer.

True to form, the judges latched onto the vanilla thing.

Let me see your vanilla face!

As I’ve said (in number six of my 10 commandments of Top Chef) there’s nothing a Top Chef judge will latch onto faster than a misplaced dessert spice. Padma said it tasted like “Invisible whipped cream.” Go ahead and add your own euphemism here.

Anyway, in an otherwise incredibly unsurprising episode, the biggest drama was whether Shirley would go home for her accidental vanilla boner or if John would go home for being John. In the end it was John. It was always John. 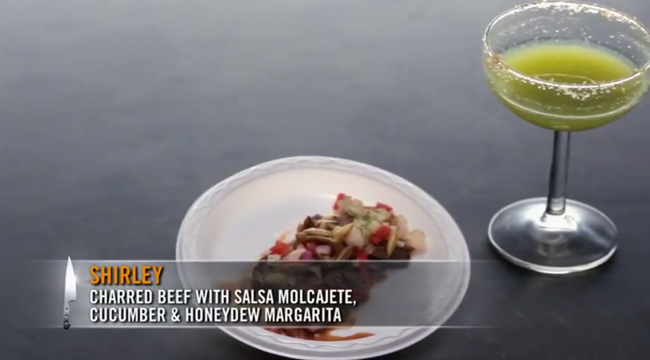 2. (-1) Sheldon Simeon, AKA Shel Chillverstein, aka Keanu, aka Hopalong

Poor Sheldon had approximately five minutes to enjoy being the favorite before Brooke came back and did cartwheels on his dreams. Okay, I exaggerate, Shel Chill is way too chill to ever get too upset about a thing like competition. Also, for as laidback a dude as he is, he tends to be the first person to most of the jokes. Like yelling “goooooooat” when they had to cook goat at a Mexican soccer stadium. Nice, brah.

Sheldon was also hampered in the margarita challenge by his utter inability to bullshit.

HEAD OF PATRON’S COCKTAIL DIVISION: So Sheldon, do you enjoy tequila cocktails?

*execs begin chuckling, everyone in the room shrugs and gives each other that “Sheldon being Sheldon” look*

Love that guy. After that, the show tried to build some drama over Sheldon possibly overcooking his octopus. I’m so worried! I’m tell-ing you, brah, this is the not loose-est I’ve ever hung! Though that was quickly defused when Richard Blaise tasted it and said it was cooked perfectly. I like to imagine Richard Blais as The Blaze, Top Chef’s answer to Top Secret’s The Torch.

Just kidding, I like Richard Blais. Sorta. But seriously, where the f*ck is Gail?

Anyway, Sheldon managed to finish second despite thinking he ruined his octopus, not liking cocktails, and having The Blaze describe his margarita as looking like “the bottom of a fish tank.” Solid finish, under the circumstances.

I have to think he’s Brooke’s nearest competition at this point. Especially if he keeps cooking Filipino food. Have you ever had Filipino food? It’s awesome. Sometimes I wish every country had been brutally colonized by Spain.

One. (+3) Brook Williamson, AKA Biscuits, aka The Girl With The Radish Tattoo

How annoyed did the other contestants have to be to see Brooke on the Jumbotron? It’s like the exact thing you knew was going to happen but briefly held out hope wouldn’t and then does. Not only do you have to fear her cooking and competent strategy, you know the producers are pulling for her. That’s just too easy a redemption narrative. She loses her own season to the winner of Last Chance Kitchen and then wins Last Chance Kitchen herself? She’s gotta be like 3-1 in Vegas right now, someone check that.

Anyway, Biscuits stormed back and immediately won the Quickfire with some goat ribs. Smart choice, everyone loves ribs. That meant she got to choose everyone’s sous chef, and naturally she paired John and Katsuji. That’s Brooke’s best quality, her casual ruthlessness. It somehow doesn’t seem mean when she pairs the two dudes who hate each other, or tells Shirley to cut it out with the ear-splitting squawks.

For her own sous chef in the margarita challenge Brooke chose Casey, meaning Brooke and Casey spent half the episode getting tipsy on tequila together which sounds like the beginning a of a dream I once had. Dang, did I type that out loud?

Brooke went on to win the challenge with a freaking cold soup covered in fruit salad. Pretty impressive when you beat an all-star field giving the judges something I could easily imagine Bruce Wayne chucking at Alfred’s head. Also, what is this, her third dish that included hibiscus? No thanks. Hibiscus tastes like a hippie’s queef.