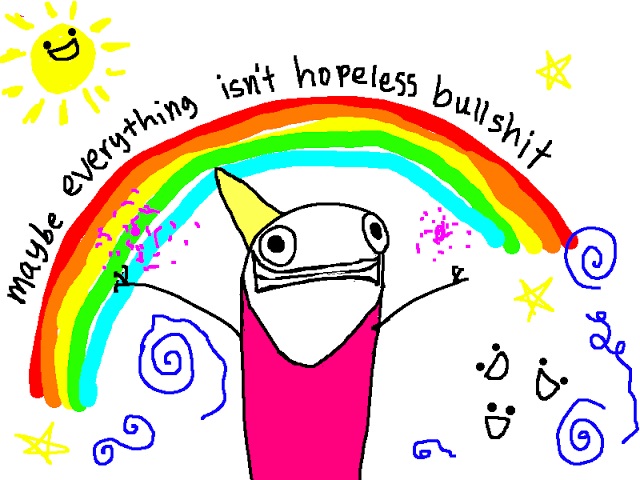 I don’t think I’m alone when I say that I can look up a list of symptoms on WebMD and effortlessly convince myself that I have Dengue Fever. Oh, rashes, headaches, and joint pain? That’s totally me.

Much more difficult would be convincing myself that my fatigue and ennui is happening because I died and forgot to go to heaven.

If, unlike me, you managed not to bail on the TV series Hannibal after four episodes, you may have watched an episode in the first season where a woman suffering from something called Cotard syndrome was (spoiler alert?) responsible for slicing off people’s faces. You would’ve been aware that such a thing as Cotard’s exists, and that people suffering from it believe they’re deceased.

Hopefully you wouldn’t then assume that everyone with Cotard’s is a mass murderer.

For the rest of us, it might come as something of a shock to know that there is a temporary mental illness wherein someone can completely convince themselves that they are in fact a dead person, somehow still existing in the living world. Most perplexing is that this disorder has been around since the late 19th century, but still doesn’t merit an official entry in the DSM (Diagnostic and Statistical Manual of Mental Disorders).

French neurologist Jules Cotard noted that one of his patients suffering from a depressive episode maintained that she was just a walking corpse. It was 1880, and the woman was so consumed by the delusion that she was nothing but skin and bones that she eventually starved herself to death. (Dead people don’t eat, right?) Since then, there have been many anecdotes added to the history of the disorder where people have rationalized that they are either dead, or immortal.

What causes these delusions and how they actually work is still up for debate. One theory is that the illness operates in tandem with something called Capgras syndrome. Capgras is a result from brain damage in the same area of the brain that Cotard’s originates. With Capgras, your mind’s recognition software suffers a failure. You begin to think your loved ones are actually pod people — that they’ve been replaced with identical-looking impostors. You look at things you once loved and feel nothing.

The working theory is that someone with Cotard’s might explain this lack of emotion as the behavior of a dead person. The part of their mind that needs to find a reason for feeling nothing when presented with past joys figures their symptoms are due to a lack of aliveness. How does that sort of brain injury happen?

One theory is that brain inflammation, paired up with other mental illnesses, could lead to someone believing they’ve died and are stuck in a very boring afterlife wherein they still have to pay bills. Esmé Weijun Wang is a novelist who — unbeknownst to her at the time — was suffering from the effects of Lyme disease when she started experiencing Cotard delusions.

She was diagnosed first with schizoaffective disorder, which is something I like to call a “sampler pack of mental illness.” You experience psychosis as you would with schizophrenia, but it’s not quite as frequent, and it’s mixed in with other mood disorders like depression. In Wang’s case, she also has a bipolar disorder.

So, when she felt herself slipping into the same sort of psychotic state she’d been in before, she tried to treat it the same way. But Cotard’s did not present itself like previous mental breaks. One day, she just woke up, looked in the mirror, and didn’t quite recognize the person staring back at her.

In an essay for The Toast, Wang described her condition as though she were reincarnated in her own private hell, in order to be given a second chance at “being nicer.” This lasted for two months. She lost 40 pounds during her illness, which only aided in convincing her she was nothing but a rotting corpse. She alternated between catatonic states, and manic-like episodes where she re-wallpapered her studio and filled up five brand new day planners with her thoughts.

Then she started giving away her clothes and possessions, which is usually a sign of an impending suicide attempt:

I was already dead, so suicide never came to mind, but the idea of having meaningless possessions did.

Not all Cotard’s patients are so lucky. Some frequently attempt suicide in an attempt to “reboot” themselves and get back to their normal lives. In Wang’s case, her delusions ended gradually, and one day, she realized she wasn’t a zombie.

“[The delusion] lifted completely without fanfare. There was no beam of light from the heavens; I was just going along and somebody pointed out that I was acting different. I realized I thought I was alive.”

Depression is already a difficult thing to live with. Adding in delusions of being the walking dead seem horrifying, especially with a disorder as rare as Cotard’s not being properly diagnosed. Unlike that obvious case of dengue fever, you probably aren’t going to ever lose all sense of touch, taste and smell because you think you’re a corpse. But discussing delusions like Cotard’s and Capgras may make it easier to normalize mental illness, so that people don’t have to suffer in confusion for so long before they find help.