Everything You Need To Know About The Making Of ‘Interstellar’

After his success with The Dark Knight trilogy, director Christopher Nolan went to explore space and beyond with his next film, Interstellar. Continuing his dedication to realism, Nolan created worlds that are some of the most scientifically accurate depictions of space that have been seen on screen. Starring Matthew McConaughey and Anne Hathaway, Interstellar centers around their search to find another home for humanity. This article centers around the search for interesting facts about Interstellar, so don’t stare at the dirt, instead, stare at your computer screen.

Director Steven Spielberg was attached to direct the film.

After he dropped out, screenwriter and brother Jonathan Nolan recommended to the studio that his brother Chris direct the film.

During production, they used the codename, “Flora’s Letter,” for the movie.

According to actress Jessica Chastain in a New York Times interview, the plot Interstellar is about the director’s relationship to his daughter, Flora.

Visual effects supervisor Paul Franklin created the effects first, so they could be displayed behind the actors while filming.

By using these digital projectors, it gave the actors something real to react to instead of only being shot on green screens.

Described as a “robotic Kit-Kat bar,” the TARS robot unfortunately does not function on its own as it was controlled by a puppeteer.

The three spacecrafts in the film (the Ranger, the Endurance, and the Lander) were made into miniature models instead of being CGI. 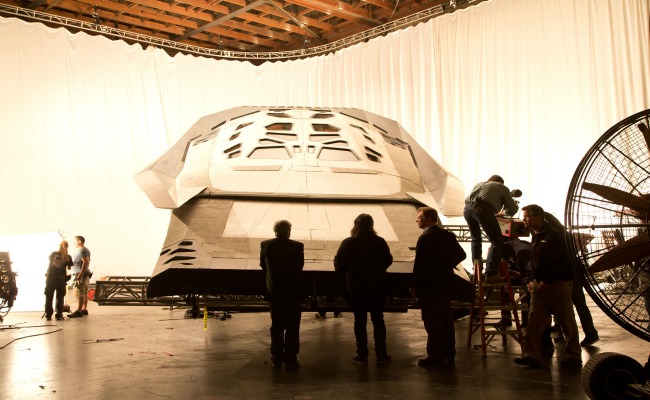 These three spacecrafts join the miniature models of Nolan’s previous films, the miniature Batmobile and garbage truck in The Dark Knight , and the destroyed hospital fortress in Inception.

Production Designer Nathan Crowley planted 500 acres of corn for the Earth scenes in the film.

Nolan actually made money off of growing the corn because they didn’t destroy enough of it during filming.

With the help of Astrophysicist Kip Thorne, Christopher Nolan was able to create the most jaw-dropping images of black holes we have ever seen.

Instead, Nolan gave Zimmer “one page of text” that included bits of dialogue and a general idea about the film. The composer still had no idea that he was making a score for a science-fiction film.

It had gotten so bad that The Cinemark Tinseltown USA and IMAX in Rochester, N.Y. posted a sign in their theater telling patrons to take their complaints up with Christopher Nolan.