‘Carol’ Proves Cate Blanchett Is The Movie Star We Deserve 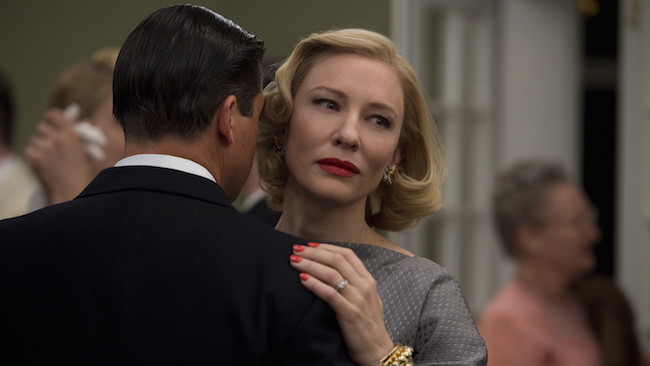 “I can’t wait to see the new Cate Blanchett movie,” is not a sentence I ever recall hearing. Not in the way we might hear, “I can’t wait to see the new Sandra Bullock movie,” or, “I’m looking forward to the new Hugh Jackman movie.” Blanchett has become a given; someone we don’t talk about a lot even though we always like her work. Blanchett, a two-time Oscar winner, is not spoken of the way we usually talk about “movie stars,” yet for an actor we all appreciate a lot, we don’t appreciate her enough. And after seeing Carol, hell, she may be the only true movie star working today.

In a way, it’s weird that Cate Blanchett is in movies like The Lord of the Rings trilogy and Indiana Jones and the Kingdom of the Crystal Skull — because those movies were mass commercial successes, yet we don’t think of her as someone who does those kinds of movies. Somehow, since American audiences got to know her back in The Talented Mr. Ripley, Blanchett has maybe become the least-famous really famous person. She’s kind of like Daniel Day-Lewis in that regard, only much more productive and much more willing to be in populist movies.

My point is: Cate Blanchett is the best actor working today and this should just be accepted as fact, to the point no one ever needs to make a case for her again. Look, in the past, I’ve been guilty of taking Blanchett for granted. She was obviously great in Blue Jasmine, winning an Academy Award for Best Actress. But there was something about it being a Woody Allen movie, and the fact that a lot of people win these kinds of things when they work for Allen. Watching her in Carol (which is currently screening at the New York Film Festival), I will never take her for granted again.

Nothing takes me out of a movie more than bad exposition. In Carol, Blanchett, who plays the title character, Carol Aird, can give years of backstory with one look. It’s uncanny. In seconds, we understand the pain of her failed marriage to Harge (Kyle Chandler, whose performance will get drowned out compared to Blanchett and Rooney Mara, but he’s excellent) without a long explanation of what happened. We can see it in both of their faces. He’s still in love with her. She is not in love with him. They don’t have to say these words.

It’s Christmas time, New York City, 1952. Dwight Eisenhower is the President-elect. Carol meets Therese Belivet (Rooney Mara), a younger woman who works at a department store. Therese is intrigued enough with this eloquent woman that she agrees to a thank-you lunch after returning a pair of gloves that Carol had forgotten behind at their first meeting. What starts out as innuendo and glances becomes something more. This poses a problem because it’s 1952.

To put some distance between herself and Harge and an ugly custody battle over their daughter, Carol invites Therese on a westward road trip. Again, it’s not what’s said between these two, but how they interact with each other, how they look at each other. Everything we need to know is right there in front of us. And because of the performances of both Blanchett and Mara, we know everything.

There’s a scene near the end of the movie that’s just a phone call between Carol and Therese. If I remember correctly, only one word is spoken. It’s immensely powerful. The way Blanchett almost caresses the voice coming from the other side. Again, with no words, we understand everything. Carol manages to punch such an emotional wallop without using the tropes that most movies use. Put it this way: the ending legitimately surprised me. I was expecting something that we all come to expect. I was not expecting what we wind up seeing and for it to still hit that hard.

When it comes to awards season, a lot is going to be made of Rooney Mara being run in the supporting category, if you’re into that sort of thing. People will be perplexed because Mara is every bit as much the lead as Blanchett. But this is all paperwork really -– a studio putting their actors in the best possible chance to win. And as good as Mara is in Carol, Blanchett is a true force. I couldn’t take my eyes off Blanchett. Everything she does in this movie is captivating. And it’s interesting to compare her work here to another awards contender, Truth. In many ways, on paper, Truth is the meatier role. Blanchett acts in that movie. But in Carol, there’s something much more, almost spiritual, happening. She grasps onto you and doesn’t let go.