Why It Will Be Hard To Cast A New Han Solo 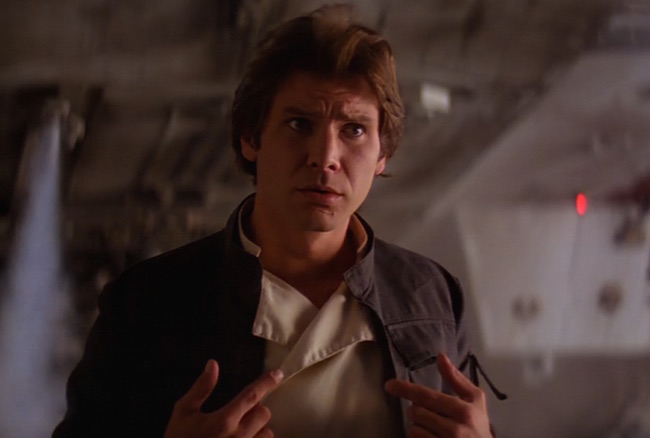 Has there ever been a movie character more discussed as an, at least hypothetical, archetype than Han Solo? Now, never really in any sort of successful way, which is why it’s so fascinating that people keep trying. Yet, filmmakers do keep trying. One of the more recent examples is Stinger Apini, Sean Bean’s character in Jupiter Ascending, who is described as a “Han Solo-type character.” I have a hard time believing we will ever read the sentence, “Sean Bean to reprise his role as Stinger Apini,” or, “Stinger Apini spinoff movie.”

To be fair to Mr. Apini, the words “Han Solo-type character” may not have come directly from the Wachowskis, but someone had to feed Deadline that description.

Here’s what’s most interesting about the character of Han Solo: He’s not that deep of a character and certainly isn’t near the first “scoundrel with a heart of gold.” Yet, Solo remains one of the best characters in the era of the modern blockbuster and a strong argument can be made that he’s the reason Star Wars is still successful today.

To prove that point, just look how poorly regarded the three Star Wars movies are without Solo. Most honest critiques of the three prequels usually start with, “It’s missing a Han Solo-type character.” The thing is, the prequels tried to have a “Han Solo-type character.” Obi Wan got a lot more wise-cracking in Attack of the Clones. Anakin even delivers Solo’s line, “Here’s where the fun begins,” in Revenge of the Sith, but tacking on some attributions does not make a Han Solo. Even George Lucas forgot how to create a Han Solo-type character. This is because the actual Han Solo is a happy accident that no one will ever be able to recreate in a moviemaking laboratory. (George Lucas’ greatest 21st century gift to society was leaving young Han Solo out of Revenge of the Sith. Yes, this was actually planned at one point.)

Harrison Ford was never supposed to be Han Solo. In fact, Han Solo was supposed to look like this thing:

Then, after George Lucas decided that Solo should more resemble a human being, Lucas actively wanted anyone but Ford, citing a hesitation to work with the same actors, at least at the time. Because Ford had been in American Graffiti, he was seemingly disqualified. Ford eventually got the part because he happened to be doing some carpentry work at Lucas’ house and was asked to sit in on some readings while other actors auditioned. Again, it was a happy accident.

The reason that it’s been impossible to replicate the “Han Solo-type character” is that most actors want to play the “Han Solo-type character.” So, what we see on screen is eager bravado, almost shooting to the rooftops, “Hey, I’m the rogue! But I’m also a hero, you just wait!” This was not Harrison Ford’s mindset. Ford thought Star Wars was stupid. At the time, however, Ford really wanted to be in movies, so what we had was an actor eager for work, but who had an open disdain for the material. This is what makes Han Solo (A) unique and (B) impossible to replicate. This combination is why Solo works so well in the original Star Wars and under Irvin Kershner’s direction (an actor’s director) in The Empire Strikes Back. Between Empire and Return of the Jedi, Ford starred in Raiders of the Lost Ark (Indiana Jones is a character Ford likes a whole lot better), so by the time that Ford returned for Jedi, he was an actor who still had a disdain for the material, but also didn’t really want to be in the movie much either… and it showed. (Ford didn’t like the script for Jedi because it gives Solo nothing to do, which is accurate.)

The reality is, there’s no such thing as a “Han Solo-type character.” There’s only a “Han Solo-type actor,” and that was Harrison Ford between the ages of 34 and 38. Solo is an almost impossible character to even write for in peripheral expanded universe books and comic books. The arrogant bravado is almost always overdone, as if Solo just barks out one-liners. But, to be fair, it’s hard to write for a character whose true major trait is “actor who thinks all of this is dumb.” (Ford notoriously told Lucas while filming Star Wars, “You can type this sh*t, but you sure as hell can’t say it.”) There are even rumblings that Star Wars: Rebels has avoided introducing Solo, like they did with Lando, because he’s such a difficult character to portray. Star Wars: Rebels is being wise.

The thing is, Ford thinking the material is dumb is what makes Star Wars work. He is our entryway into this strange world. Remember, he doesn’t even think the force is real. (In the first Star Wars movie, the Force didn’t let its users perform levitating magic tricks, so a lot could be explained away by just dismissing it as hocus pocus nonsense.) When Solo does something heroic, it really does come as a surprise because we, as an audience, truly believed that Solo did not care about anything. This is all because of Ford.

Ford, obviously, is returning as Solo later this year in Star Wars: The Force Awakens. I am not going to pretend that I’m not insanely excited about this, but I’m also preparing myself for a character that will probably not resemble the one we used to know. Yes, Ford is older. More importantly, he’s not going to be able to get himself back into that mindset of being a hungry actor who is doing a movie he thinks is silly. (I do get the sense that Ford wants to do a good job.)

There are also those fairly strong rumors that one of the standalone Star Wars movies will feature Han Solo. [Update: Those rumors are now true, the Phil Lord and Christopher Miller directed spinoff will be in theaters on May 28, 2018.] Good luck. It’s really hard to imagine this working because you need an actor who doesn’t really want to play Solo. That can happen in 1977 when nobody knew what that meant, but how is that possible today? Every male actor within the age range will want this role, but to quote Solo, “That’s the real trick, isn’t it?” Recreating a character described as a reluctant hero needs a reluctant actor.