Other Characters In ‘The Force Awakens’ Based On J.J. Abrams’ Former Teachers, Revealed 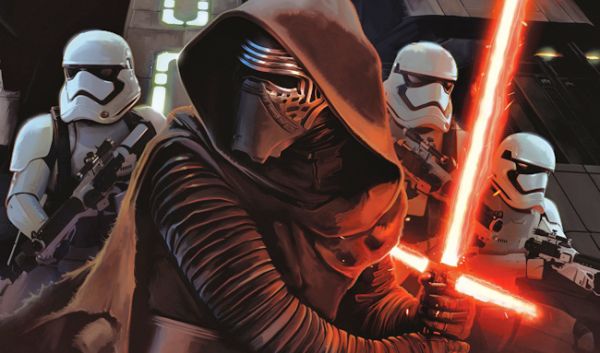 Those of us foolishly naive enough to believe the stream of news items surrounding Star Wars: The Force Awakens would ebb after the film actually came out can think again. Yet another nifty detail worth reporting came to light in a recent interview between director J.J. Abrams and SoCal publication The Palisadian Post, when Abrams revealed that he modeled the character of shriveled, bug-eyed space pirate Maz Kanata after his equally shriveled, Coke-bottle-glasses-clad high school English teacher Rose Gilbert. (Though I personally maintain that as far as the name goes, Maz Kanata was modeled after this.) The Lupita Nyong’o-voiced character plays a pivotal role in the film, [SPOILER ALERT, THOUGH ANYONE WHO’D FREAK OUT OVER SPOILERS HAS PROBABLY ALREADY SEEN IT] providing our heroes with the long-lost lightsaber formerly owned by Skywalkers Anakin and Luke, and Abrams intended this homage as a tribute to the educator who shaped him as a boy. It’s a neat-o detail, and for an added bonus, the Palisadian item has a primo photo of Abrams in his awkward years.

But Maz represents just one of many subtly hidden Easter eggs alluding to former teachers who Abrams has encoded into the film. Here at Uproxx, we’ve blown the lid off of Abrams’ intricate network of nods to his erstwhile schoolteachers. Read on:

Kylo Ren — Modeled after Wilson Davidson, Abrams’ undergrad poetry professor. Only ever seen wearing black and scowling, professor Davidson was one of the first people to see real professional potential in Abrams’ writing and foster his talents. Repeatedly gave the note to incorporate more father-son conflict into his fiction compositions. Prone to tantrums, but still possessing of a weird, distant, far-off handsomeness.

Poe Dameron — Modeled after Rick Douglas, Abrams’ middle-school gym teacher. Among Abrams and his fellow sixth-graders, nobody was cooler than Coach Rick. He always had just the perfect five o’clock shadow, just the perfect one-liner, just the perfect sense of totally-platonic-bro-hood. He was liable to disappear for long periods of time and turn back up with minimal explanation, but that only made his inevitable return that much cooler.

General Hux — Modeled after Herman Snerling, the vice principal at Abrams’ elementary school. The halls were spotless and free of mischief under the dictatorial rule of vice principal Snerling, a humorless disciplinarian with a zero-tolerance policy for failure. Abrams would cower before him, his shock of lustrous red hair frightfully unnatural to the brunette-headed youngster. Was always quietly resentful of his co-vice principal, whom the full-on principal seemed to like better.

BB-8 — Modeled after Cuddly, the guide dog that accompanied a disabled school chum that Abrams met in middle school. Cuddly was the unofficial school mascot, and even though he was really just a dog, that didn’t stop anyone from projecting human qualities onto him and loving him as such. Cuddly’s overwhelming popularity around school led to a neverending parade of Cuddly trading cards, Cuddly action figures, and even a remote control Cuddly toy. A small handful of students felt that Cuddly had been overexposed and found his overt cuteness a little cloying, but they knew that voicing these objections would mark them as social outcasts, so they mostly kept them to themselves.

Lor San Tekka — Modeled after Gunnar Alfsson, a kindly janitor who worked at Abrams’ elementary school. A brilliant neurosurgeon in his home country, he was sadly squandered on floor-mopping duty after immigrating to the United States, where his former genius went widely unacknowledged. Few students even noticed he was there, though some of the older faculty members who took the time to look into Gunnar’s past were blown away by his work back in Sweden.