Okay, so this is what we’re going to do: We’re going to talk about Kiss Kiss Bang Bang, the 2005 directorial debut of Shane Black, writer of films like Lethal Weapon and, later, writer-director of Iron Man 3. We shouldn’t need a reason to do this, because Kiss Kiss Bang Bang is great and people should talk about it a lot, but if you’re the kind of stickler who likes actions to have justifications, then allow me to point out Black’s latest film, The Nice Guys, opens this weekend. So there you go. We good now? We are? Great.

1) The plot, in short, is as follows: Harry (Robert Downey, Jr.) is a small-time thief who ends up out in L.A. to test for the part of a detective in a movie. (It’s a long story.) To research the part, he tags along with a private detective named Perry who works for the studio, who happens to be gay, and therefore is known as Gay Perry (Val Kilmer). The two of them stumble across a body. Aaaaaand go.

The plot, at length, also involves: a relationship with a woman named Harmony (Michelle Monaghan) who has ties to both Harry’s past and his case, a murderous daughter-swapping Hollywood producer, dogs swallowing detached human fingers, dudes in robot costumes drunkenly stumbling around, and, well… A lot of things happen in Kiss Kiss Bang Bang. And almost all of those things end up being connected, somehow, which is a result of the film’s — and Shane Black’s — Raymond Chandler-esque detective novel influences. (The film owes a particular, and acknowledged, debt to prolific crime writer Brett Halliday.) The whole thing is a fast-paced, twisty, turny noir that ends with Robert Downey, Jr. firing a gun while dangling from a casket high above the freeway. If you’re looking for a movie to watch this weekend, you could do much worse.

2) Oh, also, it’s set at Christmas. Black does this a lot, setting movies at Christmas even though Christmas barely has anything to do with the rest of the plot. It’s kind of his thing. Examples include: Lethal Weapon, The Last Boy Scout, The Long Kiss Goodnight, and Iron Man 3. He explained his reasoning for this seemingly superfluous yuletiding in an interview with Den of Geek a few years ago.

Christmas is fun. It’s unifying, and all your characters are involved in this event that stays within the larger story. It roots it, I think, it grounds everything. At Christmas, lonely people are lonelier, seeing friends and families go by. People take reckoning, they stock of where their lives are at Christmas. It just provides a backdrop against which different things can play out, but with one unifying, global heading. I’ve always liked it, especially in thrillers, for some reason. It’s a touch of magic.

The really nice thing about all of this is that next Christmas when someone announces between painfully smug vape drags that their favorite Christmas movie is Die Hard, you can drop a cult classic one-up on them and say yours is Kiss Kiss Bang Bang. Or you can just say A Muppet Christmas Carol. Both are correct.

3) Back to Downey. He also serves as the film’s narrator. Sort of. I imagine when you think “narrator” you think of someone with a calm, authoritative voice. Someone like, say, Morgan Freeman. This is not that. This is very much not that. Downey gives Shane Black’s words the full Robert Downey. The result is a chatty, profane hand guiding you through the film, with occasional stops to double back for corrections and to point out how bad the narration is. Like this. 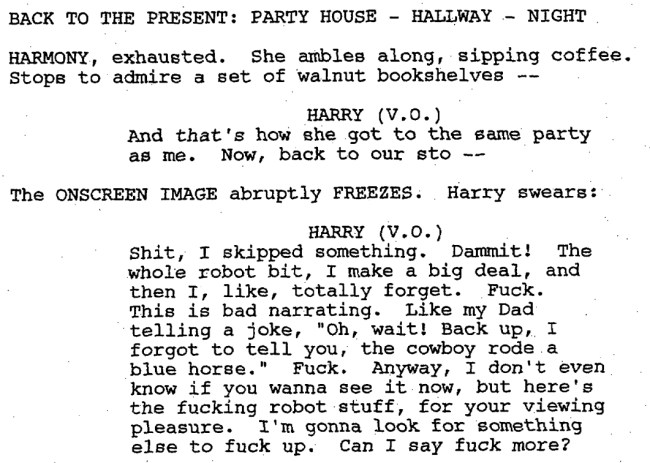 Which, I suppose, makes Harry an unreliable narrator. But it’s not that Harry is unreliable in that he’s willfully deceptive. It’s more that you just can’t rely on him to remember to give you all the facts in the right order. If we’re using Morgan Freeman as our model for narration, then think of this less like him telling you a story, and more like your friend trying to tell you one on the way home from a long night out on the town. And your tipsy friend isn’t Morgan Freeman. Even if that sounds fun.

4) The hyperspeed, chatty script extends beyond the narration to the dialogue. Black’s movies are well-known for this style, so if you’ve seen Lethal Weapon then you probably get the gist, but the dialogue in Kiss Kiss Bang Bang comes at you even faster, especially in the scenes between Harry and Perry. It’s funny to think about since their end products are very, very different, but you could make an argument that Shane Black and Aaron Sorkin are two of the best writers of dialogue working today. This brings up an important point: The West Wing, but written by Shane Black. Bradley Whitford dropping walk and talk f-words, Leo McGarry shooting people, Donna investigating a murder in her down time. I’d watch.

5) Gun to my head, I’d say this is my favorite exchange in the film:

6) But it’s not just the dialogue. The movie takes a million opportunities to upend tropes and zig where you think it’s about to zag. The best example of this takes place around the two-minute mark here.

God, I love that. Build up the tension, get you leaning one way, then POW right in the kisser.

7) It’s easy to forget today, now that Black is opening summer movies starring Ryan Gosling and Russell Crowe, and Downey is three Iron Mans, two Avengerses, and one Captain America deep, but at the time this movie was made, both were kind of on the outs in Hollywood. Black had just gone through almost a decade as a black sheep after getting paid a record $4 million for the script for Long Kiss Goodnight only to see the film become a production mess and box office bomb, and Downey was still battling back after addiction almost ruined his career. In hindsight, it’s almost a miracle the movie even got made.

But it did. And it resurrected Downey’s career. You can draw a straight line from Kiss Kiss Bang Bang to the first Iron Man in 2008 (and another straight line from that film’s success to Black being brought in to write and direct Iron Man 3). So if a butterfly flaps its wings and this movie never exists, and Marvel ends up casting another, less charismatic person in Iron Man, the whole dang enterprise might go down with it. Marvel might not have even gotten to the first Avengers movie without having to scrap everything and start over. Or maybe Timothy Olyphant — who reportedly read for the role — would have played Tony Stark and someone else would have starred in Justified. Let both parts of that one bounce around in your brain for a bit.

8) More on the history. There’s a really great interview with Black at GQ that touches on how the film came to be. Basically, during the rough patch he hit after Long Kiss Goodnight, he decided he needed to change things up completely by writing a romantic comedy. So he tried doing that, and he took it to Hollywood legend James L. Brooks for advice, and Brooks told him, in nicer terms, that the script was kind of a mess. But!

But he did say there was good stuff in there, and I was smart enough to look at it again and say, okay, it’s not all bad. And I remember distinctly the moment looking at this big monster laid out before me where I said, you know, “Fuck it. I have to put a murder in it.” And so I put in the gay detective that Val Kilmer eventually played, and I put in a murder. And it became Kiss Kiss Bang Bang. Which is why it’s sort of a hybrid. It’s half romantic comedy and half murder mystery. All that romantic stuff is leftover from my attempt to be James L. Brooks, basically.

“Fuck it, I have to put a murder in it.” Good lesson for all young screenwriters.

9) It’s also important to note how good Val Kilmer and Michelle Monaghan are. I worry all this talk about Black and Downey might be overshadowing that. Monaghan has a little less to work with but makes up for it by giving her character a kind of jaded, frenetic energy that sets the tone for everything that happens in the second and third act. And Kilmer’s performance as Gay Perry was almost revolutionary in the way it busted through traditional movie stereotypes. But I suppose that’s not a huge surprise. Val Kilmer is always great. And not just at movies, either. He is — was, since he hasn’t been active lately, which breaks my heart — even good at Twitter. I didn’t even know that was possible. And yet…

10) But the most important thing to note about the movie is that it’s just incredibly fun, which is a tough little lambada to dance in a dark-ish noir in which multiple young women get murdered. I think the key to it all is the little moments. Like the fact that Harmony is only at the party where she bumps into Harry because a producer saw her on the news explaining how an out-of-work actor had fallen off her deck after stumbling drunk into her house wearing the RoboCop-like outfit he had worn in a television show he starred in when things were going better. Or how Harry gets his finger slammed off in a door, reattached, ripped off again by thugs, and then swallowed by a dog at the site of a double murder. Those kinds of things. They help to keep you involved in an otherwise sinister story by giving you a second to breathe. More movies should do this. Most movies, really.

I suppose this is what I’ve been getting at here: Kiss Kiss Bang Bang is a good movie. I’m very happy it exists.