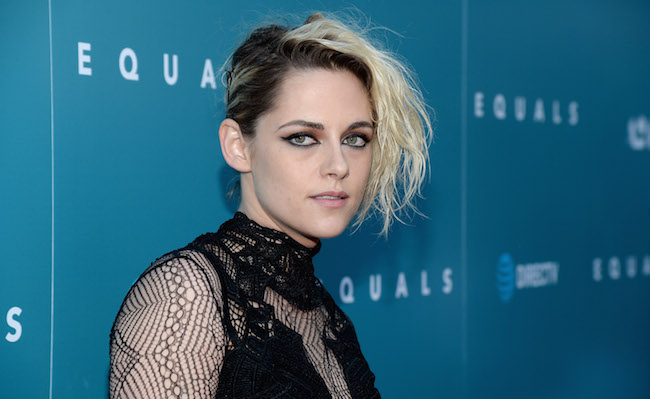 Move over Emilia Clarke, there’s another young female actress that wants to shatter the glass ceiling and become the first female 007. Kristen Stewart probably isn’t the first name that comes to mind when thinking about a ‘Jane’ Bond, but the Twilight star has some serious big screen secret agent aspirations and also a decent pitch.

In an interview with E!, Stewart and her Equals costar Nicholas Hoult discussed the possibility of Stewart being Bond. Hoult’s name has been tossed around along with Tom Hiddleston, Aiden Turner, and Idris Elba to take over Daniel Craig’s position, but doesn’t think he’s Bond material because of his age. Both Stewart and Hoult agreed that Idris Elba would make a great Bond despite “critics who slam casting a black actor or a woman as Bond.”

Hoult then described how Stewart would play Bond, and she wouldn’t be ditching the famous tuxedo anytime soon. Hoult chuckled and told Kristen,”We’ll walk into the screen test and I’ll see you dressed in a tuxedo. I’ll be like, ‘Kristen, what are you doing here?’ I’ll just turn around and walk straight back out.”

Kristen then pitched her Bond concept which she described as a bit of an old bait and switch technique, “You start off as the Bond girl and then you think it’s just the girlfriend and then you’re like, ‘She’s actually Bond.” So it’s not the most unique concept, but Stewart is on to something with having the next James Bond be someone other than a generic white dude.