‘McFarland, USA’ Is Filled With So Much Sticky Sap It Will Make You Cry 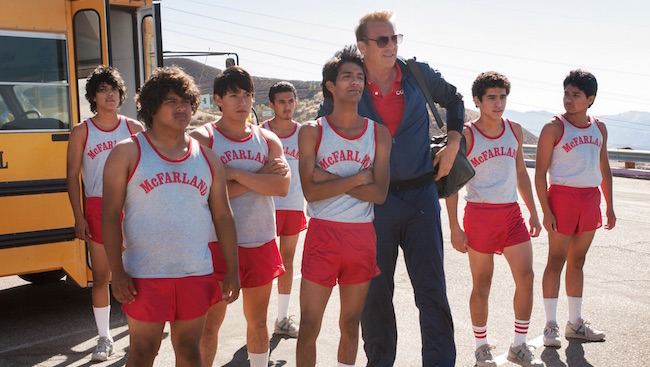 Let’s get this out of the way first: I cried during McFarland, USA. And I was embarrassed because I knew that McFarland, USA really wanted me to cry, so I went in with a determined focus not to cry. I failed. Danny Diaz got me. He got me good. (I will explain who Danny Diaz is later.)

I knew little about McFarland, USA except that (A) Kevin Costner was in it, (B) that it was about some sort of running, and (C) my friend Jordan kept texting me things like “I hate sports, but I like this movie a lot and you should see it.” I kept seeing clips of people running on a beach, so I somehow equated this whole thing with Chariots of Fire, a movie I had last seen in the early ‘80s. (I was nine years old and primarily wanted to see the movie just for the theme. As it turns out, Chariots of Fire was not made for the short attention span of a nine year old and I remember it took forever for that theme song to play. I fell for this kind of scam once more in my life, when I just wanted to see Clint Eastwood fly a cool jet in Forefox, which doesn’t happen until over two hours into the movie.)

As it turns out, McFarland, USA is about the sport of cross country. Now, this excited me because my senior year of high school, I ran cross country. Since enough time has passed, I could maybe get away with embellishing my ability at cross country running, but the reality is that I was really bad. And it’s kind of one of those experiences that are just miserable while it’s happening, but, looking back … actually it still seems kind of miserable. (Two-a-day practices in the August Missouri heat is not a fun thing, especially when “practice” was always “now go run an unreasonable distance, attack those hills.”) I tried to find some sort of Internet records of my terribleness at this sport, but I was so bad no one bothered to write anything down my finishing times. Thank goodness.

Moving on, based on a true story, McFarland, USA is about a rag tag cross country team, from a city almost dead smack in the middle of California, made up of a group of Latino Americans who had never run competitively who go on to, yes, defy the odds and make a run at the cross country state championship. Maybe this all seems cliché, but no one is going to make a movie based on a true story about a rag tag group who tried something new, then discovered they were all terrible. (Also, I’m so glad that McFarland, USA isn’t an Oscar contender because I have no desire to read 38 different pieces telling me that everything I just watched was FAKE FAKE FAKE LIES FAKE. As far as I’m concerned, Kevin Costner really was their head coach.)

Costner plays Jim White, a disgraced former football coach (he was fired for throwing a shoe at a player’s head) who, as his last option, takes a job as an assistant football coach in McFarland, a town with a population of mostly Latinos where most of the available jobs are as pickers – which are done by both the adults and children. After getting fired from the McFarland football team after a disagreement with the head coach, White, still the physical education teacher at the school, forms a cross country team after he notices that a few of his students are unreasonably fast.

The rest of the film deals with the kind of predictable aspects of keeping the team together, White neglecting his family as he spends more and more time with the team, and the taunting by the other teams that all come from “preppier” school systems. A lot of the members of the other teams are “jock assholes.” I had to laugh at this because in my experience of running cross country, I never met one “asshole.” Cross country runners are, by definition, skinny kids who aren’t playing football and who kind of understand their place in the pecking order. The eventual Missouri state champion the year I ran was on my team and he was honestly the nicest person at my school. (I just Googled his name and the phrase “super runner” is in the first headline I found.)

Anyway, of course the movie is predictable and of course the movie is sappy. You will feel sticky from all the sap when you leave the theater. (I saw this movie at the Regal E Walk in Times Square, that stickiness may not have been sap.) But this is a movie that knows how to do sap well. This is Sap Auteurism and there’s nothing wrong about that.

And then there’s Danny Diaz (Ramiro Rodriguez), who made me cry. Now, you can kind of see where the ending of this movie is going – but it doesn’t quite happen the way we all think it’s going and that little surprise is what circumvents all the defense mechanisms that had been prepared in advance – so that no matter how much you try, there’s no resisting Danny Diaz. And, in turn there’s no resisting McFarland, USA. It’s probably not even a movie that’s on your radar because movies about cross country running are not really big business, but, I promise, if you see it, it will get you, too. (The sap. The sticky sap will get you.)