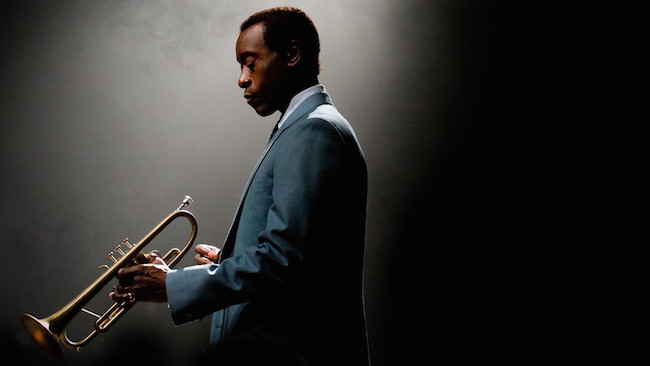 Earlier this week, my editor and I were discussing Miles Ahead, a new biopic about Miles Davis, before its debut as the closing night movie of the New York Film Festival — a movie that certainly qualifies as “Don Cheadle passion project.” I wondered out loud what the ratio was of good to bad “passion projects.” My editor hit me with three sobering words: Beyond the Sea. Like Cheadle with Miles Ahead, Kevin Spacey directed and starred in a Bobby Darin biopic that was certainly passionate — but it also featured a much-too-old-for-the-role Spacey portraying a man that, at times, was half his age. Sometimes “reason” can get lost in the “passion.” Yet, despite the tepid and kind of flat flashback scenes, Miles Ahead largely confirms the wisdom of Cheadle’s chutzpah.

“Come at it with some attitude, don’t be all corny with this shit,” Cheadle’s Miles Davis says twice in Miles Ahead. It basically proclaims that this will not be the Miles Davis biopic you thought you’d be seeing. And this is certainly true. Case in point: I certainly wasn’t expecting a ‘70s-era car chase and shoot ‘em up that felt like it was inspired by the Starsky & Hutch television series. (And we get to see this same car chase and shoot ‘em up twice.)

Seriously, this movie is pretty insane for a Miles Davis biopic. See that image at the top of this piece, one that looks like it could come from the height of Davis’ first great era as a performer? The movie is nothing like that. We spend a little bit of time in that period as some pieces of Davis’ relationship with his wife, Frances (Emayatzy Corinealdi), get filled in — these moments are what I assumed the whole movie would be like. To Cheadle’s credit, he made something very different.

The majority of the film takes place in the 1970s, when Davis became something of a recluse. Davis lives at home alone and does a lot of drugs. He carries around a gun and isn’t afraid to point it at people who annoy him. A Rolling Stone reporter named Dave Brill (Ewan McGregor) comes snooping around Davis’ house hoping for a story (in a post-screening Q&A, Cheadle explained that Brill is a conglomerate of a few reporters) and this sets off a series of wacky misadventures. Honestly, at times I had to remind myself “this is a Miles Davis biopic” and not a buddy cop movie.

But there are scenes featuring Davis and Brill speeding around New York City — cussing up a storm, snorting coke, guns a blazin’ — in an effort to prevent a new Miles Davis session recording from getting into the hands of a greedy A&R representative named Harper (Michael Stuhlbarg, who really hams it up, to the point he might as well be twirling a mustache). Miles Davis points a gun at Harper two times in this movie.

(Again, this is Miles Davis biopic.)

Most of this movie is so crazy (there is a car chase in which Miles Davis and Harper’s security guard start shooting at each other out of their respective side windows) that when it flashes back to scenes that take place years earlier it’s jarring how much the pace slows down. And the transitions are always done via stylistic devices that sometimes work and sometimes don’t. (For example, the first time we go back in time, Miles Davis is riding in an elevator at the Columbia Records building and the back of the elevator opens up like a door to another time. This moment arrives right after Davis pulls a gun on an executive at Columbia and immediately before a scene in which Davis and Brill buy cocaine from a college student.)

I don’t know how I can reinforce this more than I am. I will try with one more example: At one point, an accomplice of Harper steals Davis’ recordings. Davis and Brill track down the accomplice at a local nightclub, which leads to a chase scene through a stairwell that includes a gunfight and a fistfight.

(Again, this is a Miles Davis biopic.)

Cheadle partially financed this movie through an Indiegogo campaign. With no studio interference (the film is now being distributed by Sony Pictures Classics), Cheadle got to make the movie he wanted. No one will ever be able to mount an accusation of studio interference against Miles Ahead. Cheadle has made the most action-packed Miles Davis biopic in the history of ideas for Miles Davis biopics. We barely see Davis perform music, but we do get to see Davis knock someone’s lights out in the audience at a boxing match. (And then that person gets shot.) Miles Ahead is a bizarre movie. But that’s the movie Cheadle wanted to make. And, yes, there’s a lot of passion. (And a lot of blood.)