‘Mission: Impossible – Rogue Nation’ Is A Lot Like The First ‘MI’ Movie, Including Being Very Good 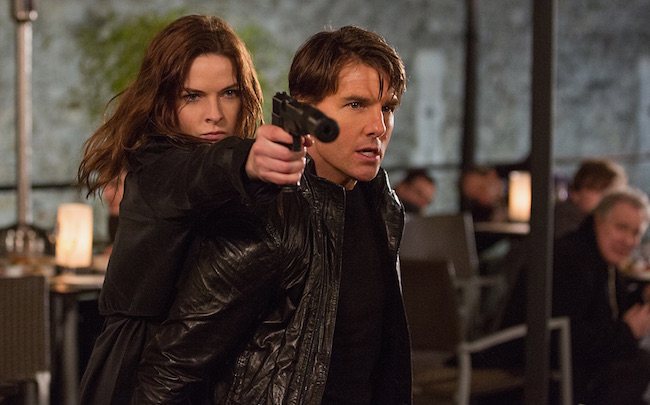 Tom Cruise has now been playing IMF agent Ethan Hunt for 19 years. This is a pretty remarkable streak, especially when you remember that, at the time Cruise did the first Mission: Impossible, he had never even been in a sequel before. Now, Brian De Palma’s first entry into this five film series seems like the obvious beginning of a franchise, but it didn’t back then. At least, not anymore than Days of Thunder felt like a franchise-builder. (If Days of Thunder had been released 10 years later, there’s a good chance that we all might be lining up to see Days of Thunder 5: Tennessee Lightning next weekend.)

For an actor who, at one time, wasn’t the kind of actor who appeared in sequels, Cruise has now played Hunt 11 years longer than Sean Connery played James Bond. (Or almost just as long if you include the off-shoot, doesn’t-count Thunderball remake, Never Say Never Again.) Outside of Sylvester Stallone in the Rocky movies (who reprises his role in the upcoming Creed), is there anyone else who has carried a franchise for this long? Even Schwarzenegger missed one of the Terminator movies. Yes, Harrison Ford has played Indiana Jones in four movies over the course of 27 years, but that fourth movie is such an outlier and it’s not the same Jones we watched in the first three films. This Ethan Hunt in Mission: Impossible – Rogue Nation isn’t that different than the Ethan Hunt we met in 1996.

The other thing that makes these Mission: Impossible movies unique is that, at least compared to other franchises, these movies seem to trickle out. Four years separated the first two films; it was six years later when we got the third, five more years passed for the fourth. Now, with the fifth, we had another four-year gap. It’s just an odd thing that Mission: Impossible is now a movie franchise that’s been with us for an entire generation. Tom Holland, the new Spider-Man, was born nine days after the first Mission: Impossible was released. Even for Spider-Man, these movies have just always existed.

Like the prior sequels, Christopher McQuarrie’s Mission: Impossible – Rogue Nation (which opens July 31) is loosely related to the others, with some returning characters (more than usual this time) and some new characters — most notably Alec Baldwin, who seems to be having the time of his life, as the director of the CIA who is no fan of the IMF.

After a series of high profile snafus – the destruction of the Kremlin is referenced from Ghost Protocol — the IMF is disbanded and Ethan Hunt becomes a wanted man. Hunt is currently in the field, trying to discover the identities of a shadow terrorist group known as The Syndicate, but the CIA has reason to believe Hunt himself is behind The Syndicate’s attacks.

So, we find Hunt and his team disavowed, being chased by the U.S. government, while at the same time trying to obtain a secret list before The Syndicate can get their hands on it. At one point, Hunt even breaks into a top-secret facility because the list can only be accessed at that location – then uses that list as a bargaining chip to gain access to The Syndicate.

If all of this sounds familiar, well it should because Rogue Nation follows a very similar template to that of the first Mission: Impossible movie. It doesn’t necessarily feel like the first film, tonally, but when you actually start listing the vague plot points out loud, it’s hard-pressed to decipher it from the original. There are more similarities that involve the ending of the film that I won’t spoil, but Rogue Nation is, if nothing else, a big fan of the first movie. (Which is good for me, because so am I.)

The Mission: Impossible movies are at their best when it involves a team. Remember the IMF team that is pretty much annihilated at the beginning of the first film? Remember when Emilio Estevez was a member of IMF? I always kind of wished we had gotten to see that team in action, at least for more than five minutes. Then the second film (and, by far, the worst) made it pretty much a solo Tom Cruise film, with no team to speak of (unless you count Cruise’s hair).

Rogue Nation is smart in that it reunites Hunt, Benji Dunn (Simon Pegg), William Brandt (Jeremy Renner) and Luther Stickell (Ving Rhames, who has been in all five movies, but only seems to get to actually participate in the odd-numbered films). And McQuarrie keeps them together for a substantial part of the movie as they try to out-maneuver The Syndicate – an organization led by a falsetto-voiced man named Solomon Lane (Sean Harris), who sometimes reminded me of Dieter, Mike Myers’ SNL character – in a race for this mysterious, heavily guarded “list.” It actually feels like a team effort! Which is what Mission: Impossible is supposed to be in the first place.

The best addition to this franchise is Rebecca Ferguson as Ilsa Faust, a disavowed British agent who we never quite know what side she’s playing for. She’s basically another Ethan Hunt, only she may or may not be evil. The guessing game is fun and it’s about time this franchise introduced a woman who is every bit as talented at Hunt. Honestly, I’d watch an entire movie about Ilsa Faust.

If I had to rank the five Mission: Impossible movies, which I don’t, but I guess I will, I’d put this one about equal with Ghost Protocol. My favorite is still the first film, partially just because it’s so ridiculously complicated, I just can’t help but love it for being so. But, again, Rogue Nation works in the spirit of the first film, although it’s slightly less complicated.

It really is interesting to look at the progression of these films. The first was an, again, overly-complicated thriller. The second was “cool” for the sake of being “cool,” which made it awful. J.J. Abrams’ third installment is about as straightforward as these movies have ever been, which was welcome compared to the film that had come before. The fourth instilled some humor along with Tom Cruise running around the outside of the Burj Khalifa. And now we get another installment that has humor and another famous Cruise stunt, this time being strapped to the side of a plane as it takes off. As we watch him on the side of that plane, it’s apparent just how hard he’s trying in an effort to entertain us. He might as well be looking at the camera, screaming, “C’mon, guys. Look what I’m doing, just for you. You realize I could die, right?” It’s a fun stunt, but it’s not why Rogue Nation works. It’s truly a team effort – and I think Cruise is starting to realize he really can’t carry one of these movies by himself anymore.

Thankfully, this time, he didn’t have to.