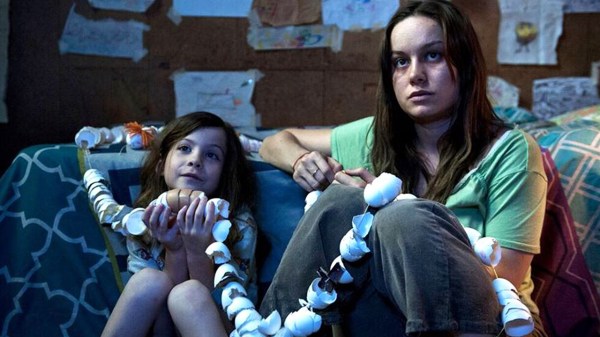 Jack (Jacob Tremblay) and his Ma (Brie Larson) live in Room. Not a room, just Room. For Jack, who turns five in Room‘s opening scene, the modified gardening shed in some anonymous Midwestern backyard is the only world he’s ever known. For his mother it’s been a prison for seven years. Kidnapped at the age of 17 by a man she knows only as Old Nick (Sean Bridgers of Rectify) she’s been confined and abused ever since. Unable to protect herself, she’s focused instead on protecting Jack. Old Nick knows of Jack’s existence, but she hides Jack away in a wardrobe (or, as he knows it, Wardrobe) each night when Old Nick comes to visit. Jack sleeps, or tries to, until Old Nick leaves, but he’s becoming increasingly aware of Old Nick’s abuses, which he sometimes witnesses from the wardrobe’s slats. If Old Nick thinks the situation can go on forever, Ma at least knows it can’t. So she starts making plans to get Jack out.

That’s the set-up for Room, an adaptation of Emma Donoghue’s 2010 novel directed by Lenny Abrahamson (Frank) from Donoghue’s script. And, for a while, it looks like this need to escape will be the whole of the film. Room begins as a tense, at times almost unbearably emotional thriller. Ma has defined how the universe works for Jack in terms she thinks will help him cope with their awful situation. (Think Dogtooth but with good intentions.) The people on TV aren’t real. Neither is the world outside, not really. All that matters is Room and their life together within it. Then, out of desperation, she starts telling him a bit more of the truth.

Abrahamson makes the most of that set-up’s close, claustrophobic quarters, as do Larson and Tremblay in a pair of intense, interlocked performances. For all he’s experienced, Jack’s also very much a kid, prone to interrupting Ma when she talks, letting his mind wander when he needs to pay attention and, most unnervingly, finding a kid’s joy even in the midst of the hellish squalor in which he’s been raised. Tremblay is a natural and Larson plays Ma’s reactions naturally. She has a bottomless amount of love for him but still finds herself frustrated and overwhelmed by his behavior. She’s, in other words, a mother.

Then, at a certain point, the film shifts. (To say more means giving away that shift and where Room goes, although no more than the trailers have. The spoiler-averse can bail now with the parting words that Room is quite good and you should go see it.)  After their escape, Room becomes a film about moving on from trauma. Ignoring a psychologist’s advice, Ma moves back into her parents’ home with Jack. Only it’s not really the home she left. Her mother (Joan Allen, always excellent and too-little seen of late) still lives there, but her father (William H. Macy) has moved away and an old family friend named Leo (Tom McCamus) has taken up residence. Her friends have all gone on with their lives. The media hovers outside. In time, after the initial joy of escape has passed, she finds herself mostly staying in her room. A doctor tells her Jack’s lucky to have escaped while he’s still “plastic” and able to roll with the extraordinary trauma he’s endured. His Ma, on the other hand, left her plasticity behind a long time ago.

Yet Room remains very much the same film even as it shifts from thriller to family drama. Abrahamson keeps the focus tightly on Jack and Ma and the intense bond they share. Donoghue’s novel limited the perspective to Jack’s unclear understanding of what was happening to him. The film doesn’t stray much further, occasionally using his narration as voiceover and depicting his awful, wonderful discovery of a world he thought exited only in shadows. (How does a kid for whom dogs were once as mythical as unicorns react to a world in which they can be found everywhere?) This choice means that Ma’s own readjustment sometimes plays out in the background, with Jack often only glimpsing her anger and despair from a distance. But Larson makes her presence felt even when she’s not in the center of the scene. She’s remarkable in both of the film’s halves, playing the extraordinary strength of a woman who focuses solely on saving her son then the fragility of a woman who might not be able to save herself.

Abrahamson strikes a remarkable balance with Room. The film never undersells the awfulness of life in Room or the difficulty of life after it. It keeps a sense of hopefulness afloat from the beginning. In one early scene, Jack’s mind drifts away to a world beyond Room while Old Nick abuses Ma. He’s dreaming of the seemingly impossible, a way out of the only life he knows. Then life gives it to him, and the film finds a different sort of balance as it depicts how hard it can be to live in the bigger world and all it demands. Freedom — however worth fighting for — has its own perils. A simpler film would have focused only on the struggle to win that freedom. Thankfully, Room is much more complex.