‘Terminator: Genisys’ Is So Silly That It Kind Of, Sort Of Works 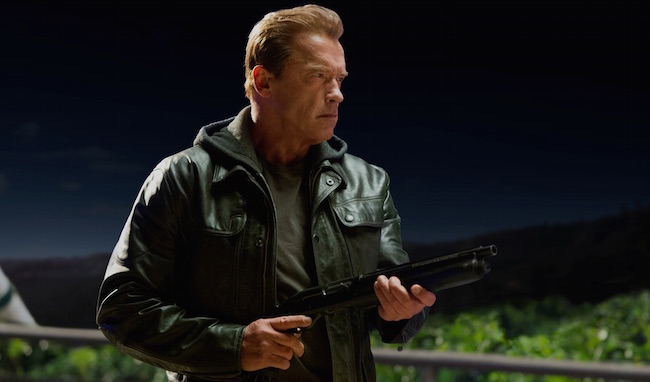 For the life of me, I can’t figure out why the Terminator series is a franchise. James Cameron’s first movie — even though it includes a much more illustrious backstory than it ever needed — is basically “robot chases humans.” It’s so simple that it’s great. The second movie, Terminator 2: Judgment Day, is an action spectacular — with truly groundbreaking special effects — that followed a lot of the same themes of the first film, only with the switch of Arnold Schwarzenegger’s Terminator from a villain to the hero. The second installment didn’t get too bogged down in the mythos of the backstory. Again, this was evil robot chasing humans… pretty simple stuff. (Plus, T2 featured “You Could Be Mine” by Guns N’ Roses, a song that features the line “and your cocaine tongue” in the lyrics, which sounds very cool when you are 17 years old.)

The next two films in the series (especially Terminator: Salvation) really tried to build on the mythos of the overarching story, the courageous battle between the heroic humans against the evil Skynet. It was no longer just “a robot verses humans,” and these movies are worse for it. And that’s the thing, I don’t think many people care about the actual Skynet other than being able to use it in a joke about our real-life NSA. We are now five films into a franchise that no one really cares about, which is remarkable. People like the first two movies, almost as individual entities, but I’m hard-pressed to find someone who is just super into this franchise. I guess Paramount feels the same way, because Terminator: Genisys pretty much disregards the previous two movies. It really is saying, “Hey, remember that last Terminator movie you really liked way back in 1991? This is a sequel to that one.” (Or, as Matt Singer at ScreenCrush calls it, it’s a “selective sequel.”)

Terminator: Genisys has kind of gone out of its way to get people to hate it before they ever saw it. First of all, the title with the dumb spelling of “genesis” with a “y” won’t make you many friends. Then came those Entertainment Weekly photos, in which the cast is shown screaming while firing a weapon. They looked dark and gritty in such a “dark and gritty” way that it came off as parody. It just started to feel like this movie that not many people wanted in the first place was being openly antagonizing.

The most surprising thing about Terminator: Genisys is just how seriously it doesn’t take itself. Pound for pound, this is the most intentionally corny movie of the franchise, and it’s better off for it. The plot is stupid, but the characters also seem to be in on the joke, so while they have fun with the plot, I started having fun with the plot.

I’ve seen some comparisons of Terminator: Genisys to Back to the Future Part II. I do not agree with these comparisons (I think Genisys is much more like J.J. Abrams’ first Star Trek movie), but the tone of how the characters react to these ludicrous time traveling situations is similar. Arnold Schwarzenegger’s Terminator (now called “Pops”) is basically Doc Brown, explaining all the mumbo jumbo, as Jai Courtney’s Kyle Reese looks on wide-eyed and skeptical. The only thing missing is an occasional, “That’s heavy, Pops.” (It’s right now that I want to make it clear that Terminator: Genisys is nowhere as good as Back to the Future Part II.)

The comparison to Star Trek comes from the fact a character is sent back in time (well, further back this time), which completely resets the timeline. As you’ve probably seen in the trailer, Sarah Connor (Emilia Clarke) is now well aware of the danger she’s in and has to save Kyle Reese after being sent back by John Connor (Jason Clarke) to 1984. (Reese still thinks he’s on the timeline of the first movie when he arrives.) Connor is accompanied by Pops (you will never get used to that name), and the three are now on the run from other Terminators that are sent after them as they leap through time some more. (There’s quite a bit of time travel jumps in this movie.)

The neatest scene comes when Pops (nope, will never get used to that) confronts the original Terminator that’s sent back to 1984, which is basically Schwarzenegger from 31 years ago. (Again, Pops is basically all-knowing, so he knows when and where this Terminator will arrive, and he and Connor are waiting for him.) This is a pretty fascinating scene because it feels like “the future,” our future. This de-aging CGI stunt has been done before (and it’s done again in the upcoming Ant-Man), but it’s never looked this good. It’s hard not to think that this will be done all the time now. I mean, really, it looks just like young Arnold, who then fights older Arnold.

The biggest problem with Terminator: Genisys is when it, like its two predecessors, gets too bogged down on all that Skynet stuff. The new plan is to stop Skynet before it even begins (in this new timeline, Judgment Day is now in 2017), and Skynet has a new plan, which is basically to infiltrate everyone’s digital devices as an app that’s being sold to people on the premise that it will link people’s electronic devices together. So, basically, Skynet is now “the cloud.” Terminator: Genisys feels very anti-mobile device.

I realize that everything in the previous paragraph sounds stupid. But, again, the characters almost treat it as such, so, somehow, this all kind of, sort of works. Barely.

As an aside: If you’ve watched the trailers, you’re aware of a big character twist/reveal. And, yes, in the movie, it’s kind of a big deal to already know that. For the life of me, I don’t know why that was put in the trailer. Anyway, if you haven’t watched the trailer, please don’t.

A lot of Terminator: Genisys is there to set up future movies, but the one thing that any future movies have going for it is that, with this new timeline, we no longer have to worry about hitting those specific Skynet beats. Maybe there are some more stories to tell in this Terminator franchise? Like Star Trek, they could take this story anywhere now. (So, yes, I suppose we should be looking for Terminator Into Darkness in a few years.)