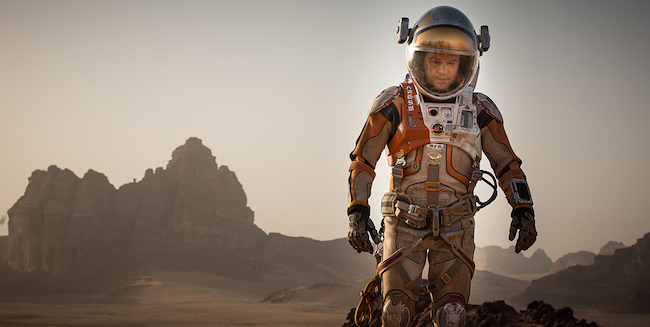 It’s only when the credits rolled on The Martian after its Toronto International Film Festival debut that I remembered Drew Goddard wrote the script. And then I thought to myself, Oh, right, this all makes sense now. Goddard, who co-wrote and directed the infinitely self-aware The Cabin in the Woods, brings a self-aware, lighthearted approach to The Martian … which maybe shouldn’t be too surprising, but then you remember that this is a movie about a man hopelessly stranded on a desolate planet, directed by Ridley Scott. At no point did I expect The Martian to be “fun,” but it’s surprisingly (and sort of weirdly) just that.

Based on Andy Weirs’ popular book of the same name, Matt Damon plays Mark Watney, a botanist who winds up stranded on the planet Mars after the rest of his crew thinks he’s been killed. Watney has limited resources and will surely die before any rescue mission could possibly launch. (Traveling to Mars is tricky because Earth and Mars orbit at different speeds around the sun, a mission can only really be launched when the two planets line up.) But, being a botanist comes in handy: using his own excrement (gross) to fertilize potatoes, he extends his lifespan considerably – at least long enough for an actual rescue mission to be attempted.

Yes, a movie like Cast Away comes to mind while watching The Martian. Whereas Tom Hanks’ Chuck Noland is a relative idiot in terms of how to survive in the wilderness – remember, building a fire was a huge accomplishment; enough for that to be ever-present in all the marketing for Cast Away — Watney is a legitimate genius. He knows things and can do things that you or I would never know how to do. It was simpler to relate to Chuck Noland because it was easy to put ourselves in his shoes and probably make a lot of the same mistakes. It’s almost impossible to relate to Matt Damon’s Mark Watney because YOU might be a genius botanist, but I am not a genius botanist.

However! I did say “almost.” And a big part of the trick that The Martian pulls off is the casting of Matt Damon. In this movie we see Damon using his charming and funny persona to make us care about Watney. One of my favorite aspects about Watney is that there’s no grieving wife and three kids back on Earth who all want daddy to come home – other than his parents, we don’t really hear much about Watney’s social life or personal relations. (Though, he does seem to really love Happy Days.) Instead, we just get to know Mark Watney and we root for Watney, not because there’s some punk kid at home who is sad, we root for Watney because we learn to really like Mark Watney. He seems like a nice guy! And without Damon playing Watney, I’m not sure this movie works.

While all this is going on, the rest of Watney’s crew, led by Jessica Chastain’s Melissa Lewis, are on their way back to Earth. And by the time the NASA bigwigs decide to tell them that Watney is still alive, there’s not much they can do about it. Jeff Daniels’ Teddy Sanders (who’s the closest thing this movie has to a “hard ass”) and Chiwetel Ejiofor’s Vincent Kapoor lead the “NASA bigwigs” who desperately want to get Watney home. Here’s another nice thing about The Martian: There’s no bad guy just for the sake of being a bad guy. There’s no evil senator yelling, “He knew the risks, let him die!” Everyone wants Watney home. The closest thing The Martian has to a bad guy is Mars itself – and Mars doesn’t seem all that bad. Well, at least not until it does.

Watney communicates with the audience, us, by making video logs of his adventure. The Martian is definitely not filled with long, brooding shots of Watney’s self-reflective silence. Instead, he’s talking. A lot. And making a lot of jokes and making a lot of popular culture references. (Again, Drew Goddard wrote this script.) This kind of should be a bleak movie, but it’s anything but bleak. There are scenes on Mars – especially when a storm hits – that reminded me of Ridley Scott’s Prometheus, but here Scott drops all the unnecessary plot and dire mood that bogged that movie down, and it’s replaced with hope and humor. It’s a wonder what those type of things can do to a movie. And all of this adds up to, again, a surprisingly lighthearted journey. At least, about as lighthearted as a movie can be about being stranded on a desolate death planet.

And maybe the best part: Watney doesn’t even need to make himself a new friend out of a stray volleyball.