We Watched All Four ‘Scorpion King’ Movies. This Is What We Saw. 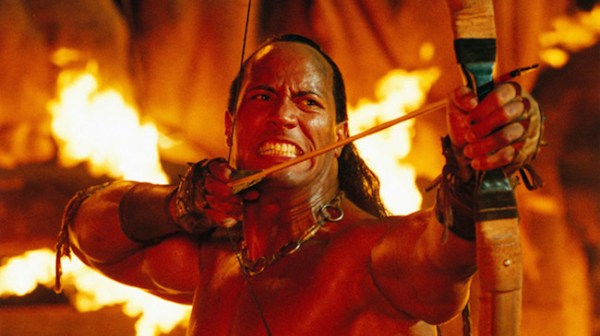 If you asked me a month ago, “Were you aware that three, soon to be four, Scorpion King movies existed?,” I’m not sure I could give an honest answer. I think it’s one of those things I might have known subconsciously – I do know that I’ve read this piece that clearly states there are three Scorpion King movies — but never wanted to address head on.

It’s an interesting time in one’s life when the decision is made to make a serious change. Sometimes the moment comes quickly and abrasively, leaving one no choice but to alter a lifestyle. Other times, like this, a lot of thought goes into what this decision means and how it will affect the rest of my life. And after a lot of thought, I decided that I wanted to know what it was like to be able to say, “I have seen all four Scorpion King movies.”

In 1999, Universal released a fairly innocuous movie called The Mummy starring Brendan Fraser and Rachel Weisz that grossed $415 million worldwide. (I donated $8 to that total, or whatever amount it was that movie tickets cost back then.) Two years later, a sequel, called The Mummy Returns, would make just a little over what the first made (I contributed to that tally, too), but it also introduced the character of The Scorpion King, played by Dwayne “The Rock” Johnson. In this first appearance, The Scorpion King has sold his soul in exchange for survival. Then, around 4850 years later, he shows back up to torment Brendan Fraser – Fraser winds up killing The Scorpion King, which, really could have been the end of The Scorpion King’s story right there and I’m pretty sure society, as we know it, would have continued unabated. And, for me, this is when The Scorpion King’s story did end … until this week when, over a 36-hour period, I watched all four Scorpion King spinoff movies.

I suspect that the filmmakers associated with The Mummy Returns didn’t quite know what they had with Dwayne Johnson. They probably just wanted “a wrestler,” not the charismatic actor and mainstream public figure that Johnson would eventually become. So, it makes sense that once they figured out that they had a future star, it wouldn’t be the worst idea to give Johnson his own movie. Directed by Chuck Russell (best known for directing The Mask), Johnson charms his way through a bad movie in which not a lot happens. Sure, within 15 seconds of the movie opening, a man his stabbed in the forehead with some sort of thrown projectile, but even at a quick 92 minutes, this movie is a slog. Thankfully, Dwayne “The Rock” Johnson shows up in this movie almost immediately and it’s hard not to notice what great teeth The Scorpion King possesses. Also: The Scorpion King isn’t yet The Scorpion King, as this is a prequel to The Mummy movies, so the future Scorpion King goes by the name Mathayus as he walks around Egypt, being all charming and all.

Again, this movie is a slog, because there’s really not much of a plot to speak of – something about killing the future-seeing sorcerer of an evil king named Memnon (Steven Brand). Though, surprisingly, The Scorpion King is filled with a lot more slapstick humor than really any movie this century should be allowed. At one point, The Scorpion King is catapulted out of a tower into another tower, accompanied by the Rock’s wide-eyed “Whoooooooooaaaaa” as he’s shot across. Regardless, even after all of that The Scorpion King is better than most movies of this ilk that come out today — say, compared to something like Pompeii. It’s easy to see that The Rock was going to be a movie star and it’s also easy to see that The Rock would never, ever do another The Scorpion King movie.

After, I’d guess, at least 15 close-ups of The Rock’s eyes (The Scorpion King does not shy away from closing on The Rock’s face as he’s trying to strategize or think or whatever), the movie ends with The Rock defeating Memnon with a one-two punch of an arrow to the chest as Memnon is also falling into a pit of fire in the most obvious, “That’s gotta hurt!” type way. The Scorpion King ends happily enough, with The Rock being appointed a king, looking to live out his life in piece with his love, Cassandra. It’s nice moment, as we fade out to the tender sounds of “I Stand Alone” by Godsmack.

(I almost hate admitting this. But it took me a few minutes to realize what was going on. I guess my brain wasn’t prepared to process a prequel to a prequel. About five minutes in, I actually said out loud, “Oh, the kid is The Scorpion King!”)

The Scorpion King 2: Rise of a Warrior was directed by Russell Mulcahy, who is best known for directing The Highlander and directing a number of Duran Duran videos, including “Rio” and “Hungry Like the Wolf.” Sadly, no Duran Duran songs were used during The Scorpion King 2: Rise of a Warrior. (I almost wrote “I was surprised to learn Russell Mulcahy directed this movie,” but then deleted that sentence when I admitted to myself that I would have been surprised to learn that anyone directed this movie.)

The story of The Scorpion King 2: Rise of a Warrior is so convoluted, I’ll skip any in-depth discussion other than to say that Randy Couture is the villain and, by the end of the movie, he turns into a mostly invisible scorpion who fights the young future Scorpion King (Michael Copon). And why this budget-saving tactic isn’t used more often, I will never know. Let’s say the next Avengers movie went over budget, well what’s to say Ultron can’t be invisible for half the fight? And there’s nothing quite as unintentionally funny as watching an actor fight an invisible villain.

Also, at one point, the young future Scorpion King fights what could be the worst looking on-screen minotaur in the history of movie minotaurs. And, for what it’s worth, our cat loved this movie. 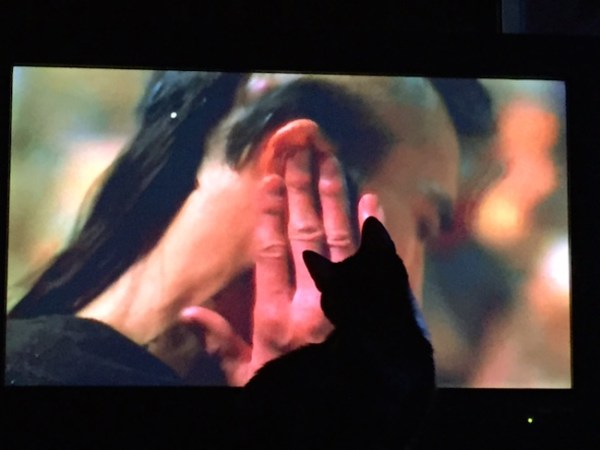 By the end, the future Scorpion King is offered a crown, but turns it down and, instead, rides off into the desert on a camel. Michael Copon would never return to his role as The Scorpion King, making him the George Lazenby of Scorpion King actors.

If The Rock is the Sean Connery of Scorpion Kings, then Victor Webster is the Roger Moore. And you know, as they say, whoever was your first Scorpion King will also be your favorite Scorpion King for life.

My patience was wearing thin by the time I got to this movie and I didn’t even find the cat’s fascination with The Scorpion King amusing any longer. The Scorpion King 3: Battle for Redemption is a buddy road trip comedy of sorts, as The Scorpion King is paired with a galoot named Olaf. (At one point in this movie, Olaf is kicked in the penis by a ninja while he was urinating.) Also, there’s a scene in which The Scorpion King meets with a king in a room with hardwood floors. Is that historically accurate? Did they have hard wood floors in 3000 something B.C.? I have no idea!

The most interesting thing about The Scorpion King 3: Battle for Redemption is that Billy Zane is in this movie playing the villain, King Talus. Perhaps I’ve watched too many Scorpion King movies, but by the end of this movie, I was convinced that Zane should have been nominated for an Academy Award for his performance in The Scorpion King 3: Battle for Redemption. At one point, Billy Zane is chanting in the rain, which results in Kimbo Slice showing up. I almost applauded. (Honestly, I’m convinced Zane is still playing Cal Hockley from Titanic. Also, according to Wikipedia, Billy Zane appeared in six movies in 2012.)

Not surprisingly at this point, The Scorpion King defeats Billy Zane – Zane actually says the line, “I will rise again like a bad idea” – and order is restored and our Scorpion King is victorious. I can’t believe there’s another movie after this.

This may not be saying a lot, but The Scorpion King 4: Quest for Power is the most enjoyable of the Scorpion King movies. Now, the reason for this is that the movie just rips off scenes from every movie that you probably like, then seams them together to make something that resembles a coherent movie.

At this point, I have now seen every Scorpion King movie.

Some people will want to ask if I feel any different, now that I’ve seen every Scorpion King movie — I have to be honest and say that, yes, I do feel different. It doesn’t make me a better person, but I strangely feel wiser. I survived FOUR Scorpion King movies this week. If I can do that, I really can do anything. Perhaps I will now finally enroll in astronaut school.