Despite the sunny subject matter on his new album, The Big Day, it seems that listeners’ reception to the project has Chance The Rapper feeling less than upbeat. The Chicago rapper sent a series of tweets detailing his mental state and a feeling that he was being bullied for expressing love for his wife and his beliefs, echoing sentiments he’d previously expressed and belying some of his jovial tweets that seemed to play along with some of the memes about his album’s content.

“I’m getting this crazy feeling that people want me to kill myself,” he admitted. “That’s not my vibe at all, but i feel the push.” Alarming as that intro may be though, Chance’s thread began to resemble the arc of his musical evolution: From melancholy to resolute. Check out the full statement below:

And I feel like even more than that, some people want me to feel ashamed. Shame is heavy yo. And feeling shame for something that you were once prideful about is super heavy. What’s really weird is that music is the number one thing that influences how I feel on the daily. Like can really push me to one side or the other. And thats super raw to me. Cause I’m sure there’s other people that get their fuel from music. So for anybody out there thats texted me the past few days, I appreciate you. And I’m happy being able to spend time with my family and do alot of the things I used to do before I got so wrapped up in making this project. And I wanna let some of these feelings go cause thats whats twitter is for. For people to say exactly whats on their hearts. And the number one thing thats been on my heart and has been reaffirmed in the last week that I’m now 100% sure of is… That I LOVE my wife.” 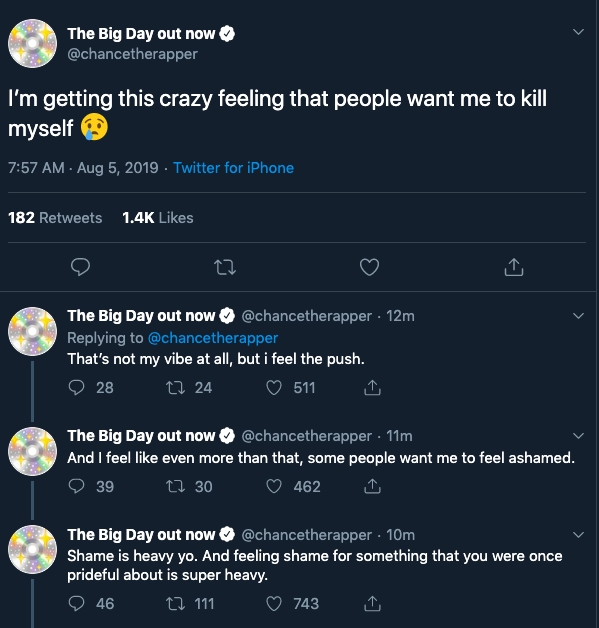 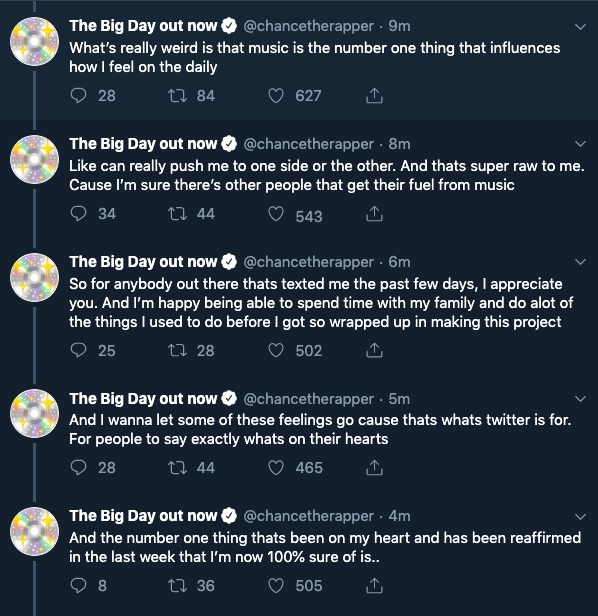 While the last note may make it seem like Chance is once again trolling the trolls, it does seem like he did have some rather heavy thoughts on his mind and that despite the jokes, he really has found solace in the very thing his critics poke fun at him for. Hopefully, he is able to hold onto the positive outlook his marriage has granted him without letting the haters get him down.

Update: It seems Chance wants to make sure fans don’t misinterpret his earlier statements, as he logged back in to reiterate “that I don’t want to kill myself, nor am I ashamed of loving my wife.” He did, however, point out that the reaction to his tweets did have at least one negative effect: “Tryna tell yall how I feel now I done fuckaround missed chik fil a breakfast.” Better luck tomorrow, Chance.

I just want to reiterate that I don’t want to kill myself, nor am I ashamed of loving my wife. I think I just wanted to say out loud that I see the vibes 👀👀