This Band, Titus Andronicus, Could Be Your Life 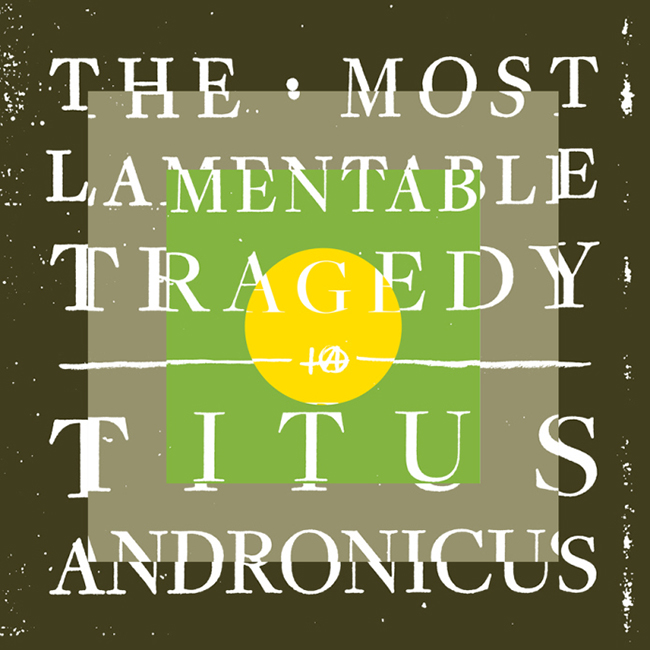 There’s no such thing as a perfect double album. The Beatles’ The White Album and Bob Dylan’s Blonde on Blonde have “Revolution 9” and “Rainy Day Women #12 & 35,” respectively. Certain tracks from Stevie Wonder on Songs in the Key of Life linger longer than they should. Tommy by the Who and The Wall by Pink Floyd, both occasionally sleepy, inspired countless pretentious admirers, the greatest sin of all. That’s part of their charm, though — the messy, boring, and inessential songs are a chance for the listener to take a deep breath, to recharge before “Visions of Johanna” or “Knocks Me Off My Feet” change your life, man.

The best double album is also one of the greatest albums ever, the Clash’s London Calling, but even it slips ever so slightly near the end. “The Card Cheat” and “Four Horsemen” are enjoyable, but they can’t keep with the stacked first half, with “Jimmy Jazz,” “Hateful,” and “Rudie Can’t Fail” finishing side one. It wasn’t The Only Band That Matters’ lone double album, though: At 144 minutes, follow-up Sandinista! is overstuffed and occasionally perplexing, but it’s mostly brilliant, dipping into genres as varied as punk, reggae and rockabilly. It’s a tribute to excess that isn’t excessive, the sound of a band throwing everything at the wall and seeing what sticks.

That’s the feeling I get listening to The Most Lamentable Tragedy, the new album from Titus Andronicus, America’s most essential contemporary rock band (IMHO). It’s a 29-song rock opera about mental illness that clocks in at 93 minutes; there’s a Pogues cover, two more parts of the “No Future” saga the band began on previous albums; and a straightforward version of “Auld Lang Syne.” Oh, and an intermission and “[seven seconds],” which is seven seconds of silence and some asshole’s favorite song on the album, an album that’s inspired, if you want to call it that, by frontman/Pitchfork troller Patrick Stickles’ experience with manic depression.

Lamentable follows Our Hero, the once-institutionalized moral center, who meets his doppelgänger. With the help of him/not-him, Our Hero is taught to embrace the anarchy of living, which could be the name of Titus’ next album. Lifes Rich Pageant was already claimed.

The record is divided into five parts, each song packed with enough references and allusions to fill a college course, but Stickles wants you to “feel no obligation to swallow the whole thing in one gulp, even if that would be the Artist’s selfish preference.” It’s to Lamentable‘s great fortune that you’re able to slip in and out of the story. If you want to hear the hard-charging pairing of “Funny Feeling” and “Fatal Flaw,” go ahead; if you want to follow Our Hero on his “transformative odyssey,” that works, too. It’s both a heavy and ambitious examination of what it means to be miserable and alive, a melodic Nietzsche quote, and a killer punk album, not unlike Hüsker Dü’s titanic Zen Arcade, another of its more immediate, ferocious forebears.

The Most Lamentable Tragedy begs to be projected upon, which is what I’m going to do.

In between my freshman and sophomore years of college, I was a patient at a mental hospital, twice, for a total of 21 days. My story isn’t anything out of the ordinary — diagnosed with borderline personality disorder; it was something less extreme than that — but it was an understandably uneasy time. I would know EXACTLY what I wanted to do for an hour. The next, I felt hopeless, lost, and alone. My life was both chaotic and specific, and that’s what I hear when I listen to The Most Lamentable Tragedy: the tight, 4-minute “I Lost My Mind,” followed by a rager, a nearly-silent intro, another barnburner, then “I Lost My Mind” again, all coming in at 96 seconds or under.

One of my assignments in the hospital was to write down an album that made me happy, something I could count on to calm me down when things threatened to get out of hand. I chose David Bowie, because I was really into quaint British love songs in 2006, apparently? If I had to do it again, I might pick The Most Lamentable Tragedy. It’s not Titus’ best work, in my opinion (that honor would still go to The Monitor, arguably the best rock album of the 2000s), but that’s precisely what I love about it. It’s messy, heartfelt, vivid, introspective, and personal and insular, far more so than the sing-along-worthy Monitor. Most of all, it’s reassuring, a double album with a statement and point of view that, despite its faults, or possibly because of, I relate to.

In the penultimate track, “Stable Boy,” an aesthetic tribute to Daniel Johnston, Stickles mournfully sings, “I won’t let you sleep forever, ooh, never, no, never, no, never no sleeping forever.” No matter how sh*tty things get, there’s always someone, be it “your mother,” “your brother,” or “my sister,” who’d miss you when you’re gone. The psychiatrists should’ve played this song on a loop, instead of preaching some boring gibberish about “the mind’s eye.” That’s what Stickles wants:

“This is trying to say something about humanity,” Stickles says. “I can only speak from the experiences of one human. But I’m not trying to jerk off into the abyss. I want to reach people and find kids like me, and let them know that they’re not quite so alone. Pay back the debt that I owe to Lars von Trier, Paul Westerberg, Tim Armstrong.” (Via exclaim.ca)

Five years after I left the hospital for good, I saw Titus Andronicus cover The Replacements at the Our Band Could Be Your Life tribute show in New York. Author/curator Michael Azerrad adding Titus to the bill was an apt choice, because with The Airing of Grievances, The Monitor, Local Business, and now The Most Lamentable Tragedy, Titus could be my life. And are.