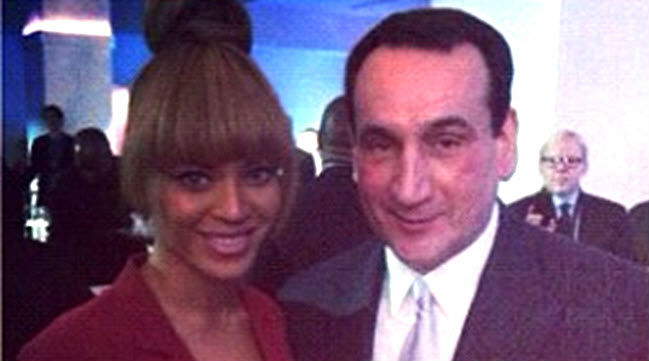 To be fair, everyone should feel like this when they meet Beyonce. In a recent interview with a local Durham television station, Duke head coach Mike Krzyzewski is asked about the time he met Queen B two years ago, when he presented LeBron James with the Sports Illustrated Sportsman of the Year Award. Jay Z was in attendance with his wife, Beyonce, and the legendary coach took a photo with Jay Z and James, but he didn’t get a chance to meet Beyonce. So, he decided to take matters into his own hands.

“But I didn’t get to meet her, so I went up and said ‘I’m Coach K’ and she says ‘I just heard you speak for 10 minutes. I know who you are.’ So I felt like 13, and then I asked her — something I hardly ever ask anyone to do — would you please take a picture with me?”

The best in their respective professions…

He admittedly joked that he looked “petrified” in the photo, but who can blame him? You’d think with so many accolades, Coach K has earned throughout his storied career that he’d be a little more composed, though.