A Hockey Broadcaster Delivered A Cringeworthy Double Entendre About Shafts

The Los Angeles Kings headed into Edmonton to take on the Oilers on Sunday night, and, while it was a good night for the team (they won 3-2), it wasn’t such a great night for Kings broadcaster Bob Miller.

During one of the game’s intermissions, Miller was attempting to reference a play in front of the net when he accidentally (maybe?) dropped a very cringeworthy double entendre that quickly went viral because it was equal parts hilarious and awkward.

“He’s standing at the front of the net with about eight inches of his shaft in his hand.”

Yeesh, how could you not see that one coming? It was so obvious that even Miller himself cringed almost immediately after it came out of his mouth. In fact, his reaction might be the funniest part of the whole thing. This is the face of a man who knows he just made an oops: 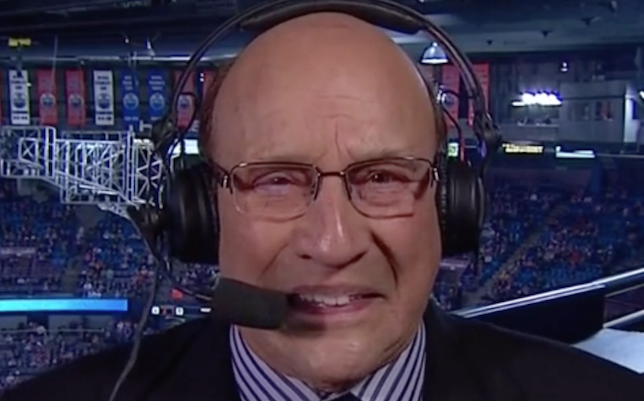 It’s okay, Bob. We all have rough days.

Update: As pointed out by a reader, Miller was actually telling an old story about the commentary he provided while calling a play involving Marlo Lessard, not a play during Sunday’s game. So that explains why his reactionary cringe was so immediate.