There have been countless memorable moments in the ACC tournament throughout the years, but one that doesn’t get nearly enough attention is the run Randolph Childress had in 1995 to bring Wake Forest an ACC title. Somehow it has been 20 years since that crazy weekend, and heading into this year’s ACC tournament the Demon Deacons find themselves as the 11-seed playing against Virginia Tech on Tuesday.

Childress, now an assistant with Wake Forest, put up 107 points in just three games, breaking the tournament record of 106 points set by North Carolina’s Len Rosenbluth in 1957. He had 40 points in the quarterfinals, 30 points in the semis and 37 in the finals.

“He was so good it was stupid,” ESPN play-by-play analyst Mike Patrick told UPROXX Sports. “It was three of the great days of my life just to be there calling it.”

Patrick was on the broadcast of the championship game for ESPN, and he believes that Childress’ tournament performance will never be matched.

“Childress was doing it on such a stage and just doing it so effortlessly,” Patrick said. “To do it three days in a row was just staggering.”

(If you want to watch the full championship game against UNC, and you probably should if you can spare a couple hours, it’s on YouTube here.)

The Wake Forest senior was named the tournament MVP, and he gave Wake the game-winner in overtime. He scored all nine of the Demon Deacons points in the extra period.

Via the great ACC writer, Barry Jacobs, from 1995:

“He made all the big plays for them,” [Jerry] Stackhouse said. “He’s been on fire against everybody. He came to play. We came to play, but he made play after play.”

[Dave] Odom, in his sixth year as Wake Forest’s coach, expressed satisfaction that the championship game was decided by Childress.

“For anybody else to score the nine points, including the winning shot, almost would have taken away from the victory,” said the coach. “I’m so glad Randolph had that opportunity.”

While the game winner was obviously the shot that meant the most, the most unforgettable moment came earlier in the game, as Childress had a crossover dribble that even today makes my ankles hurt just watching it. As good as it is to have a video of this, I almost wonder just how tall a tale this story could get from people telling it over and over if there was no footage of it in existence.

Guarded by future NBA player Jeff McInnis, Randolph changes direction with the dribble, and McInnis falls to the floor. Childress doesn’t immediately drive or shoot. Instead he stares McInnis down and motions with his hand for McInnis to get up before draining a three. His smirk following the shot says it all.

“There were two things that have always stayed with me when anybody asks me ‘what’s the neatest thing or greatest thing you ever saw?’” Patrick said. “Just the three days of the best tournament there was. He had the best three days in that tournament that anybody’s ever had. Clearly, that anybody ever had. When you say anybody, you start to think about the people who have played in the ACC. It’s stunning that nobody has ever really come close to him. And then the ankle breaker against McInnis, it just took your breath away.”

There were whispers that Childress played the whole tournament with a dislocated or even broken finger, which would make his ridiculous run even more incredible.

“It was the finest three days of individual basketball that I’ve ever seen,” Odom said at the time. “It’s the kind of performance you hope to witness. I’ve spoken to people who have seen every ACC tournament, and they’ve said the same thing.”

Wake Forest, with Childress and another player you may have heard of named Tim Duncan, eventually made it to the Sweet Sixteen but lost to Oklahoma State, 71-66. The Cowboys under Eddie Sutton had Big Country Reeves and held Duncan to just 12 points. Childress would have a chance to tie the game with Wake trailing by three, but he turned it over, and Oklahoma State got a dunk to provide the five-point margin. 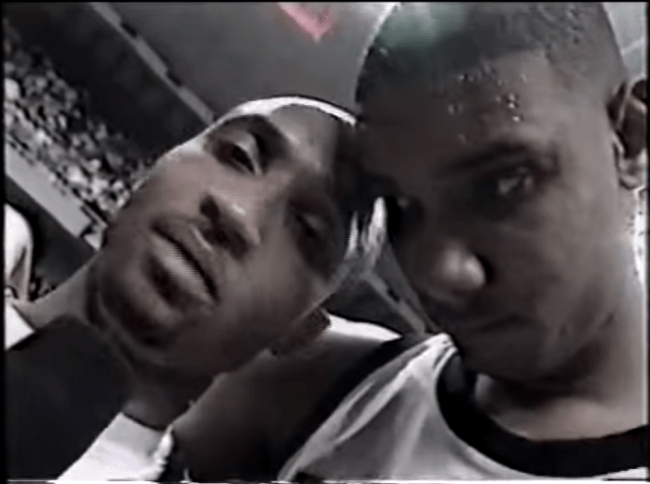 Childress was selected 19th overall in the 1995 NBA Draft by the Detroit Pistons, but he lasted just two years in the league before heading overseas where he played 14 seasons. He rejoined the Demon Deacons athletic department in the fall of 2011 and was added to the coaching staff in April of 2012.

There’s another Childress headed to Wake Forest, as Randolph’s son Brandon is a 2016 commit.

Brandon discussed what it was like to be the son of an ACC legend in an article from the The Winston-Salem Journal‘s Brant Wilkerson-New just this week.

It was something I just had to get used to, really fast,” Brandon Childress said. “It’s a gift and a curse being my father’s son — he told me that since day one, since I started playing the game of basketball.

“The curse is, ‘Can I live up to the hype?’ Stuff like that, I mean, it’s pretty cool — just something I had to adjust to. It didn’t really bother me as much; I kind of took it as motivation — ‘Hey, I’ve got to work hard to get people to know me as Brandon Childress instead of Randolph’s son.’”

The crossover will live on in ACC lore for as long as there is an ACC, and there’s no doubt the name Childress will always hold a special place in Wake Forest fans’ hearts.