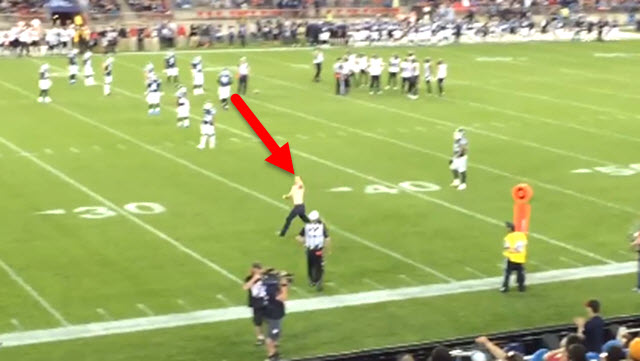 To try and drum up some extra attention for this year’s CFL season, important football lifestyle items like tailgating and alcohol were given a little more extra attention. Naturally, when cheap booze is thrown in the mix, you run the risk of, well, people acting like morons.

And that happened. This year’s season opener between the Toronto Argonauts and the Hamilton Tigercats brought in double the crowd from last year. Twice as many people means twice as much excitement – and twice the odds that someone will want to run on the field without their clothes on.

Not one but two football fans stripped down and ran around recently, and now the world has documented proof.

The first streaker is just a jolly man waving his shirt, doing a little dance and then getting the heck out of there. The second streaker gets a little bit cocky and pays a price.

Streaker 2… #CFLKickoff. Both of these happened one after another. pic.twitter.com/XK5AboaYHo

That streaker just got body slammed by one of the Argonauts. I feel bad that these players have to take matters into their own hands. Where’s the security? Do these guys even get fined or banned? Maybe it’s just a slap to the wrist style warning? It will be interesting to see if tailgating, cheap drinks, and streaking will be a trend this season or if it starts and ends here.