‘Justified’ Discussion: ‘Get Ready For The Boom!’ 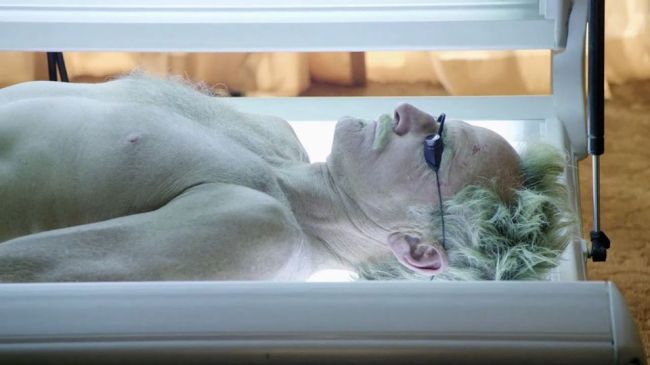 We have learned a great many things about Wynn Duffy in this, the final season of Justified. We learned he, a career criminal who loves women’s tennis and travels almost exclusively by luxury RV, keeps a personal tanning bed in his hotel room. We learned that he was a teenage Hawaiian surf champion. We learned that he, to quote his muscle bound sidekick Mikey, “LOVES GUAC,” even, occasionally, for breakfast. And last night — thanks to an unsealed indictment and some, oh, let’s say “enthusiastic” interrogation techniques (CHECKHOV’S TANNING BED) — we learned the most important thing yet: It was he, Wynn Duffy, who snitched on Katherine’s husband Grady all those years ago, leading to the deaths of both Grady and the U.S. Attorney responsible for prosecuting him.

This revelation set the events of last night’s episode in motion, like so many scheming, thieving, marijuana-growing dominoes. Wynn being revealed as the snitch allowed Raylan and Art to apply pressure on him to get Boyd to move up the date of the heist. Moving up the date of the heist meant that Boyd would have to do it during Markham’s big party at the Pizza Portal. Doing it during the party at the Pizza Portal put Boyd, Markham, and Loretta in the same room for a freewheeling three-way political debate that ended with everyone’s weed-related cards on the table and Raylan very aplexed, despite consuming a not-insignificant amount of free top shelf whiskey. And that’s where things went to hell.

The long and short of Boyd’s failed heist — thanks to crazy old revenge-seeking Uncle Zachariah — is that now he is wounded both physically (pipe, head) and mentally (piles of drug money that signify his best shot at escaping Harlan with his accomplice fiancé, unmoved), and like any wounded predator, he is about to become dangerous and unpredictable. Actually, no. Check that. He is becoming very predictable. Raylan knows he is going after the money when Markham moves it. The dangerous thing, though? That stands. A Boyd Crowder with nothing to lose is a mighty scary Boyd Crowder indeed.

And all, or at least most, of that happened because a young, enterprising criminal named Wynn Duffy — a cockroach, which I mean in this instance not as an insult, but to say “a perfectly evolved survivor” — secretly turned state’s evidence many years ago to save his own neck and is selling out his partners to do it again now. It makes you question everything else we know about the man. I mean, hell, he might not even like guac, you know.

And now, the highlights:

– LORETTA. What a terrific episode for her. From staring down Markham’s snake-killing associate in her kitchen, to striding into Boyd’s bar — which still has not had a single non-criminal customer, I believe — to propose a partnership (and say “Don’t crowd me, boy” to Earl, which lol), to going full “Boyd at the town meeting in Season 2” at Markham’s party, the episode was just as much a showcase for her as it was for Wynn. Loretta is the greatest. By the time she was done with her speech I was sitting here like “YEAH. LET’S ALL GROW SOME F*CKING WEED.”

– Speaking of this new snake-killing sharpshooter, (a) The Black Donnellys aired for one season eight years ago but Jonathan Tucker will always be Tommy Donnelly to me, (b) hmmmmm a crazy sociopath outsider coming to Harlan at the behest of crime boss and talking big muck to Raylan while flashing a gun around in a public place, I wonder how this will aaaaaaaaaaaaaaand he’s dead. Seriously, Kentucky is littered with the corpses of ambitious men who tried to do harm to Raylan Givens. This will not end well for him.

– The thing with Boyd getting shackled in the mine and almost getting blown to hell was terrifying. Dying alone in a mine explosion set up by your fiancee’s crazy uncle does not seem very fun. Boyd was obviously not going to go out this way, but still, seeing him dive to safety like the dog in Independence Day was quite a relief.

– Let’s not overlook one important aspect of this Wynn snitching news: He was the one responsible for getting Katherine’s husband arrested and killed, and now, years later, he is teaming up with her to attempt to rob a dangerous millionaire crime lord who she believes — and who Wynn has led her to believe — was the rat. It’s amazing he can even get his pants on with balls that big.

– If Justified has taught us anything over its six-season run, it would probably be that you should never let the sweet-seeming grandmother in the leather dress go for her purse while you’re trying to rob her in her fancy hotel suite. A useful lesson for all of us.

– Man, poor Mikey. First he found out his boss and mentor is a snitch, then he ended up on the receiving end of some wicked burns from Tim and he couldn’t do anything about it. He just looked so sad all night, like a little boy who lost his puppy. I like Mikey. There’s a big part of me that wants to see him, like, go to community college at night to get his business degree so he can open a gym. He’s too sweet for this life.

– Was nice to see the Wynnebo again, by the way. I like to picture it just parked in the hotel lot for weeks a time, taking up five or six spots. I also like to picture it as their only method of transportation, meaning Mikey has to take it to pick up dry-cleaning, or through the Dunkin’ Donuts drive through on a coffee run.