Mr. Robot returned for its much-anticipated second season last night with a lot of balls still in the air from last season’s finale. Who knocked on Elliot’s door? What happened to Tyrell Wellick? What’s happening with White Rose and the secret cabal of billionaires? And the second season premiere answered… precisely none of those questions. But what did you expect, really? This is Mr. Robot we’re talking about. It’s not so much that it zigs when you expect it to zag as it is that it just randomly zigzags about and expects you to trust that it knows what it’s doing. Sometimes while it’s zigzagging it shouts things like, “Guess what! That’s his dead dad!” It’s a fun show.

But anyway, instead of giving us those answers, Mr. Robot spent most of the two-part premiere checking in on its non-missing, non-B.D. Wong characters in the weeks after the fsociety hack on Evil Corp. And setting things on fire. But we’ll get to that. Here are some questions we had about the whole thing.

How long will Elliot be able to control Mr. Robot?

Well first of all, let’s go ahead and toss the word “control” in quotes, because while Elliot (Rami Malek) turned the tables a bit at the end with the terrific kiss-off line, “I’m late for my church group. Peace,” my man still has issues. His hallucinated alter-ego has apparently been shooting him in the head quite a lot (which is never good!), and he retains enough control to override Elliot’s program at night to set up secret meetings with strange dog aficionados (also probably bad!).

But Elliot’s new regimented, tech-free lifestyle is giving him more control than he had last season. The journals help him account for exactly what’s going on and the repetition of his daily activities help keep little slivers of his anarchist past from popping up. This is good news for Elliot and his mental health, one imagines, but it won’t make for a season of riveting television, so I have to think things are going to start corkscrewing at some point in the near future. That phone call might have something to do with it. Bad for Elliot. Good for us.

What’s up with Tyrell?

No clue, although we did get a mini-flashback to him and Elliot at the moment of the hack, and we saw Elliot make a move toward the popcorn machine that’s had the gun stored in it for what feels like forever now (the funniest thing would be if a character pulled it out to try to shoot someone and the gun malfunctioned because it’s clogged with gobs of liquid butter), so that would seem to indicate that maybe Tyrell ain’t doing so well. And Mr. Robot sure seems mighty cagey whenever Elliot peppers him for answers about it all, so that doesn’t make things look to promising either. But someone is making cryptic phone calls and sending Joanna gifts with cellphones taped to them. So there’s that, too. 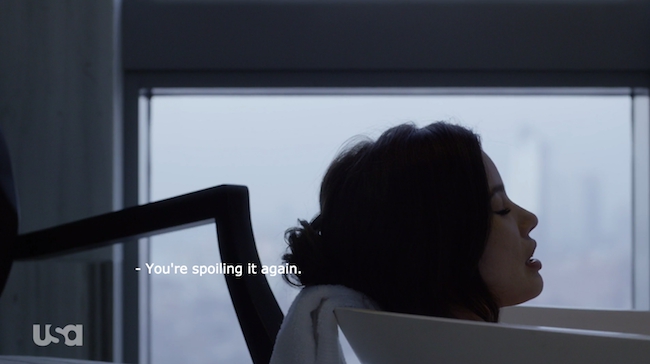 If you were to rank Elliot’s new friends, say, by awarding them Olympic-style medals, how would that look?

Loses points for being repeatedly told that he is not, in fact, Elliot’s friend, but Craig Robinson is a delight and he has a cool dog and lots of opinions about basketball, so let’s go ahead and count him as a friend anyway. Ray is definitely up to… something. I imagine we’ll find out pretty soon.

Leon and his Seinfeld opinions provided much-needed comic relief in a double episode that featured multiple gun shots to the head. He pretty much has the show figured out, too, even on its deepest, most philosophical levels. I hope we keep getting his opinions on syndicated television throughout the season. I want to hear his take on Ross and Rachel.

This one is weird, because for almost all of last season, up until about halfway through the finale, the answer to this was Angela. She was kind of jittery and unsure of herself and always had some sort of problem that was on the verge of tearing her apart — loser boyfriend, family debts, shaky lawsuits, etc. But right around the time she took the job at Evil Corp — and specifically, when she chewed out that shoe salesman — she started appearing more confident. Now, is that confidence a ruse duct-taped together by denial and self-help tapes? Maybe. But it’s still there.

Darlene, on the other hand, is struggling. The fsociety hack didn’t do all they hoped (that was a great scene in the bank, because like, of course Evil Corp would figure out how to use the hack to hose its customers), and the group’s numbers are thinning and getting diluted by bros who just want to chop bulls’ nuts off and take selfies, and she doesn’t have Elliot to help her anymore. Heavy is the head that wears the crown.

One last Darlene note: Did anyone else get a kind of Mad Max vibe from her introduction? Like how at the beginning of Fury Road, Immortan Joe is this frail-ish old dude with health problems but they mask it with various apparatuses and armor and what have you, and at the beginning of Mr. Robot, Darlene is huddled in a ball of anxiety on the floor but she masks it with fierce makeup and a somewhat put-on revolutionary attitude? And then they both emerge to give inspirational speeches from balconies to their loyal followers?

If your smart house started turning on you and trying to kill you, what would you do?

Man, I would bolt so fast. In fact, I would have bolted before it even got to that. Shouts go out to new character Susan “Madam Executioner” Jacobs, Evil Corp’s general counsel and possessor of an A+ nickname, for sticking it out as long as she did, but if my multinational conglomerate was under attack by a group of masked anarchist computer hackers and my smart house so much as beeped in a way that sounded, like, a little different than one of its normal beeps, I’d be out. Catch me at the Four Seasons.

Are we gonna miss Gideon or nah?

Poor Gideon. Poor, sweet Gideon. Poor, sweet, innocent Gideon, grazing in the field and hopping along like a happy little lamb, never seeing the impending doom headed his way. He lost his company, his marriage, and now his life, and why? Because he was too nice and/or incompetent to prevent any of it. Even the thing with the FBI. Why did he go to Elliot first? What did he think was going to happen there? Poor guy actually got killed twice last night, once in Elliot’s fantasy and once in real life by someone who thinks the murder will make him a hero. Tough week for Gideon.

But will we miss him? I mean… kind of? Again, he was a sweet man, but I’m not exactly sure what he was bringing to the table at this point. The predators have all had their fun with him already. Rest in peace, you adorable little creature. You’re safe now.

How great was that Phil Collins scene?

No, but really. How great was that scene? Mr. Robot‘s musical selections have always been extremely on point, but that whole thing — from the quiet fade in where I was like, “Wait, is that ‘Take Me Home’ by Phil Collins?” to the rising chorus over the $6 million bonfire — was about as cool a piece of television as I’ve seen in a long, long time. I know Hot Carla feels me on this one.