When you work in entertainment media long enough, you start to get a feel for if a TV show is going to be good or not based on the enthusiasm the publicists for the network exhibit for the show in your communications with them. Based on the enthusiasm Comedy Central’s press team has exhibited from the start for Another Period — which kicked off its second season last week — I suspected it was going to be delightful, and, as it turns out, it is indeed that.

For the benefit of those unfamiliar with the show, here’s a brief synopsis: Another Period is set in 1902 and tells the story of Lillian and Beatrice Bellacourt, two sisters played by Natasha Leggero and Riki Lindhome, who co-created and co-write the show. The Bellacourt sisters are consumed by a simple obsession: Being rich and famous and, in the process, living the most ridiculously fabulous and outrageously decadent lives two Gilded Age siblings from Newport, Rhode Island — a center of early 20th century power and wealth — could possibly live. Equal parts parody of Downton Abbey and Keeping Up With The Kardashians, the second season sees the sisters trying to ditch their rich, gay husbands for men who are even richer (and less gay).

When I met with Lindhome and Leggero recently to talk about the show, it’d just been announced that Comedy Central had renewed Another Period for a third season before a single episode of the second season had even aired. We talked about how they conceived the idea for the series, the totally fabulous way they get creative work done together, and the traumatic origin of their friendship, among other things.

Congrats on getting renewed for another season before this new one has even aired.

Leggero: With a show like ours it’s a gift, because we have so many high-level cast members and writers. It’s so beneficial for scheduling so we can get our cast and our writers all lined up and together.

I’ve always been interested in the dynamic of two writers working on something together. How do you guys work creatively?

Lindhome: We like to do it on vacation. We like to go away, away from Los Angeles, and just brainstorm. Every character, we figure out their backstory, where they’re headed, etc. We plan everything out.

Leggero: We sat in a cabana once and just thought of character names for like two days.

That had to be a lot of fun.

Leggero: It was a lot of fun!

I could swear I’d heard that name somewhere before watching your show.

Leggero: No, you haven’t. That’s how good it is.

Where did the idea for the show come from? It seems like something two friends sitting in a bar having a bunch of drinks would dream up where you say, “Hey, let’s get all of our friends together and dress up in elaborate costumes and have a lot of fun?” But you’re actually getting to do this in the form of a TV show.

Lindhome: Natasha had these two ideas she’d been working on. One was a reality show called Dumb which was about the dumbest people in America, and another that was set in Newport at the turn of the century.

Leggero: And Riki said, “Why don’t we combine them?” So it was very collaborative. But, yes, of course, we like to dress up like princesses and be really mean to people. But also we went to Newport — we’ve been like three times now — and we felt so inspired by the stories there. I don’t think most people realize that, at the turn of the century, we had our own Downton Abbey there. But it was very American, and it was very crazy. People were living like rappers. There was no income tax. There was a lot of new money.

Lindhome: These were brand-new billionaires.

Leggero: I believe one of the guys there, [Andrew] Carnegie, had more money than all of the rest of America.

Lindhome: He had three billion when he died and that was in 1900s money.

Wow. And we make a big deal about rich vs. poor income discrepancy these days. It was ridiculous back then.

Leggero: That’s why the show is so cool, to me. Like you said, it does kind of mirror things that are happening now in society, even though it’s 110 years or so later. Rich people are still figuring out ways to pay no income tax. That was what that time was all about. Then later on when these rich people were finally forced to pay income tax, some of them couldn’t afford to live these ridiculous lifestyles anymore.

Lindhome: Some of them had like 40 household employees and then all of a sudden their income was cut in half so they couldn’t afford all the help anymore.

Leggero: And also, some of these employees, who were basically indentured servants, started to get wise. One of our episodes is about a strike that really did happen in Newport because these people were being forced to work like 18 hours a day and they were only given like one free-time situation every two weeks. They couldn’t have families, they couldn’t drink.

Lindhome: There was a strike at one estate where, I think the workers were demanding an hour of free time per week. And the rich guy was like, “No.” And then they wanted a day off every two weeks or every month or something and he was like, “Absolutely not.”

I didn’t realize that so much of the show is based on ridiculous and cruel things that actually happened.

Lindhome: So much of it. So much.

Leggero: Even though we’re having fun doing this, it keeps us inspired, to hear all these stories. And we could go back to Newport tomorrow and see more things and hear even more stories.

How far do you guys go back? What’s the origin of your friendship?

Leggero: We went to Senegal together years ago, like six or seven years ago, to help cure malaria through comedy sketches. There was a lot of down time.

Lindhome: We got there a few days earlier than everyone else.

Leggero: Yeah, I think what happened is that Paul Scheer, Ed Helms and Nick Kroll… There was a medical emergency on their plane or something.

Lindhome: Yeah, someone had a heart attack on their plane and it had to make an emergency landing in Paris. So they were stuck in Paris for a few days walking down the street drinking wine while we were in Africa, just the two of us.

Leggero: Meanwhile, we’re in Senegal waiting for them eating stale bread for breakfast. Breakfast in Africa is black coffee and stale bread. Riki and I don’t like to be uncomfortable, so we kind of bonded over that. We would go to our rooms and just cry.

Wow, it was that bad?

Lindhome: It was just so depressing.

Leggero: It was depressing.

Lindhome: And there was no air conditioning.

How awful. But some of the best friendships, the strongest bonds in life, are born out of sharing trauma and strife with someone else.

Lindhome: [Laughs.] Well, I wouldn’t go so far as to call it “strife and trauma” for us. The people with malaria in Senegal probably had it worse.

Leggero: Yeah, the people dying of real diseases definitely had it worse.

Lindhome: But no air conditioning!

Do you ever take a step back and think about where you guys are now and recognize how lucky you are to get paid to play dress-up with all your friends on a TV show?

Lindhome: Yes, all the time. Probably at least once a week since this started. I’ll have one of those moments where I’m like, “WHAT?!”

Leggero: And then we’ll think, “How lucky is Comedy Central and the viewing public that we’re making this show for them? What a gift. We’re so generous.” 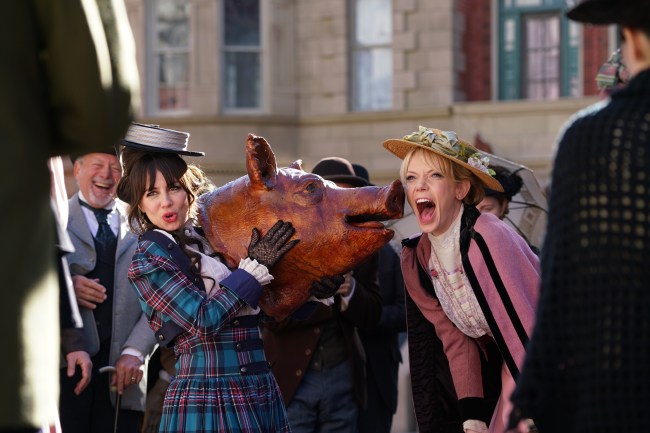 Another Period airs each Wednesday at 10 p.m. EST on Comedy Central.