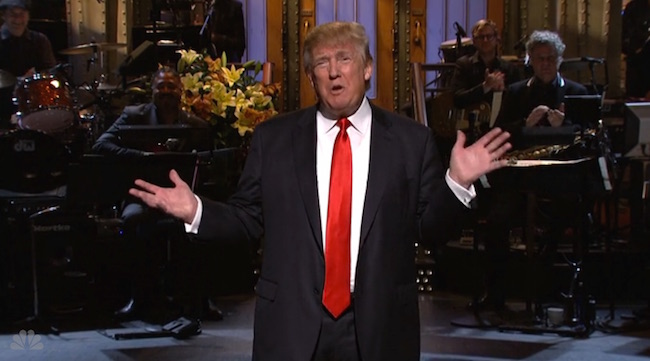 Before we start, can we just take a moment to remember how great SNL was just three weeks ago when Tracy Morgan hosted? Donald Trump’s show was so bad last night people seem to have collectively forgotten how we had just gotten done celebrating Morgan’s efforts. Donald Trump’s show was so bad, even I was getting a lot of flack in a, “How do you ever watch this show?,” kind of way – only last night I really didn’t have much of a defense, so I just curled up into a ball and took my lumps. Comparatively, I can only imagine what it was like to be a cast member or a writer on the show this week and wanting to have no part of any of this.

And this was a show that the cast made it clear they would have loved to have been anywhere else other than on the show. The looks on cast members’ faces ranged from embarrassed to indignant. No one seemed happy and it’s obvious to everyone that having Trump host was a terrible idea. (I suspect SNL figured this out about a week ago, but it was too late to really do anything about it.) Sure, they tried to do the whole, “We’re in on the joke. See, Larry David called Trump a racist,” tactic, but it backfired and looked kind of desperate. Sure, SNL will get its ratings for the Trump show, but boy it took a hit culturally. SNL will recover, it always does, but this one will take awhile.

The whole thing just makes me sad. Here’s your Scorecard:

“Bad Girls” (Ensemble) By the time this played after the atrocious “White House 2018” sketch, so many people were still in shock, it was difficult to even pay attention to what was going on. Watching again, this is… fine. It’s not up there with the other women anthems that have been done over the last two or three seasons, but it’s good — just bad timing.

“Hotline Bling Parody” (Pharoah, Killam, Bennett, Moynihan, Short, Trump) People on SNL often talk about the difficulties of writing sketch comedy in a world where comedy sketches can just pop up out of nowhere every day on YouTube and, sometimes, they just have to ignore that and push through. This felt like an example of that. Trump was actually sort of funny in this, but it probably would have landed a little better had we not seen Drake playing tennis and the other hundred “Hotline Bling” parodies already.

“Cold Open: MSNBC Forum” (Strong, Thompson, Killam, McKinnon, Pharoah, David) You could tell right from the start that something was off. Here’s a political sketch in which Kate McKinnon did her best Hillary Clinton to date (she’s really getting good at her), and Larry David returned as Bernie Sanders, yet everyone involved looked like they were doing their best, but also knew they had a root canal schooled right after the show. Why couldn’t Larry David just be the host?

“Toots Intro” (Trump, Thompson, Pharoah) Funny, earlier this week I had looked up who the musical guest was when Trump hosted the first time and thought, Well, there’s an obscure answer. So, yes, I actually kind of appreciated this — at least until Trump made an unfunny joke about carrying a gun.

“Weekend Update” (Jost, Che, Jones, Moynihan) Colin Jost and Michael Che messed up their intro and didn’t really seem to care. Che looked annoyed the whole time that he even had to be part of this (which is understandable), but where Seth Meyers and Amy Poehler turned an awkward situation into Sarah Palin rapping, here we got absolutely nothing memorable. (To be fair, I’m sure they tried and I’m sure Trump said no.) Even the usual awkward chemistry between Leslie Jones and Colin Jost wasn’t there on this night. And Bobby Moynihan’s Drunk Uncle just seemed way too on the nose. (Poor Jost, who had to scold the crowd after some applauded Moynihan’s “Bruce” line.) By this time, I just really wanted to laugh and everyone seemed too pissed off to be funny.

“Donald Trump Monologue” (Trump, Bryant, Killam, Hammond, David) Poor Taran Killam (I’m writing “poor so and so” a lot today), he’s done Trump a grand total of one time (not counting a “Weekend Update” segment that didn’t make it pass dress rehearsal) and now he has to give up any edge he had by doing it in front of the real Trump and Darrell Hammond’s iconic Trump impression. That was a bad idea. (All of this was a bad idea, so I guess this is at least consistent.) Larry David’s scripted, “You’re a racist,” was a bad idea. It’s what SNL always does in situations like this, steer into the controversy, but it felt desperate. Poor Larry David, you could kind of tell he knew that as he was doing it.

“Rock Band” (Thompson, Bennett, Trump, Bryant, Pharoah, Strong, McKinnon, Moynihan) The timing was off, the lines seemed off, Trump missed a few cues: I usually like it when Kenan Thompson plays some sort of a band leader, but this didn’t have it. By the time this aired, it was probably for the best that it was a dud. I’d have felt terrible for something to come along that was truly great and have it lost in the wasteland that was this particular show.

“Dinner Table Songs” (Bennett, Davidson, Bryant, Bayer, Trump) I have no idea what this sketch is called because it’s not online due to rights issues. What a frustrating piece of comedy: it felt like something that at any moment was going to become hilarious, but it never did — just another thud. It’s at this point that you could have convinced me that SNL was purposefully taking a dive in an effort to embarrass Trump.

“Live Tweeting” (Trump, Killam, McKinnon, Thompson, Strong, Bayer, Jones) What the hell was this? OK, I know what it was: NBC was worried about having to give equal time to other presidential candidates so here’s a way to have Trump in a sketch where he’s basically never on screen. (Trump was only on screen the whole night for about 14 minutes.) SNL is often at its worst when they do meta commentary about themselves, this sketch is a prime example.

“Mr. Trump, what if we did a sketch where you are president and everything is perfect.”

“This sounds great, can my daughter be in the sketch?”