‘SNL’ Scorecard: Dwayne Johnson Should Be Considered As One The Greatest ‘SNL’ Hosts Of All-Time 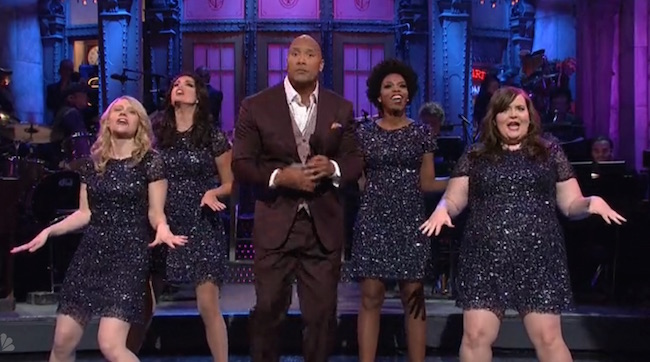 We really need to consider voting Dwayne Johnson into “national treasure” status. A few days ago, I was involved in a long discussion that centered around the question if Dwayne Johnson will ever be nominated for an Oscar in his lifetime. The easy answer is “no,” but here’s a guy with so much charisma, who knows what might happen if he winds up, say, playing a supporting role in a David Fincher movie. In the end, I decided that this was possible.

That said, likely future Oscar winner Dwayne Johnson hosted his fourth SNL last night (his first was way back in 2002) and it’s really obvious that Dwayne Johnson loves hosting SNL. Oscars and national treasures aside, from now on, when we talk about “best SNL hosts,” Dwayne Johnson has to be mentioned.

“WWE Promo Shoot” (Johnson, Moynihan, Killam, Mooney) I came very close to doing a spit take when Johnson delivered his line, “He’s got herpes.” I’ve seen hundreds of these type of wrestling promos (people forget, when SNL was dark, NBC used to air Saturday Night’s Main Event) and they do have a tendency to use the same kind of insult – as opposed to details about an opponent’s private life.

“The Jungle” (Johnson, Davidson, McKinnon, Bennett) “Cartwheel up to me,” followed by Pete Davidson’s acrobatics, followed by Kate McKinnon’s reaction shot, might be the single funniest moment on Saturday Night Live this season. It’s between this and that kid showing he has a gun in the Chris Pratt-hosted “Bad Boys” sketch.

“PepBoys” (Ensemble) The idea of PepBoys having conversations with their customers about transgendered people is just as ridiculous as what Starbucks did. I still can’t believe that was a real thing. Anyway, that’s why this works so well – taking an already stupid idea and tilting it ever so slightly to make it seem even more ludicrous.

“Improv Show” (Bryant, Mooney, Bennett, Davidson, Zamata, McKinnon, Strong) First: Kate McKinnon’s Robert Durst was aces. Just aces. And of course it’s Kate McKinnon who plays Robert Durst. This all seems so obvious … now. I just wish there was a little more to this sketch. It all seemed right there, set up for something, then it ended. This feels like a sketch that might have been longer at dress, then it’s truncated and doesn’t make quite as much sense, but they still want it in the show. Regardless, McKinnon’s Durst was worth the price of admission.

“Cold Open: The Rock Obama” (Pharoah, Johnson, Mooney, Killam, Moynihan, Zamata, Bennett, Jones) Johnson’s impression of Obama sounds less like The Hulk (which is what I think he’s going for) and a little more like Johnny Depp’s Tonto. Regardless, Johnson loves this character. I wouldn’t be surprised if he were on the phone right now, pitching the idea of a Obama/Hulk/Johnny Depp’s Tonto hybrid movie right now. People would probably pay to see that movie.

“Dinner Date” (Johnson, Strong, Thompson, Bayer, Bennett) There were some moments – the assumed price of onion rings was a highlight – but I’m still not quite sure what this sketch was about. Everyone was pretty great in it though, which made it at least sort of entertaining at times. I don’t know, this is one of those, “I don’t have a strong opinion on this sketch one way or another, but I can’t just leave it off” type sketches.

“Brogaine” (Mooney, Bennett, Johnson) This seemed like a long way to go just to get to that SAE joke.

“Weekend Update” (Jost, Che, McKinnon, Thompson) This will probably be the least memorable “Weekend Update” of the season. It was just “there.” And with everything that’s happened since SNL last aired three weeks ago, the main takeaway is that Colin Jost didn’t like the music for The Jinx. It was a mildly amusing joke, but this is the centerpiece? There were a few flubbed lines and, I don’t now, it seems like every time “Update” looks like it’s making progress, we go back to square one in that, if I didn’t know any better and someone told me this was Jost and Che’s first show together, I’d believe that. McKinnon’s Olya Povlatsky is good – it’s always good – but I love it when she does new characters. I liked Kenan Thompson’s Willie the first time, but I’m not so certain there’s enough here for this to be a recurring character.

“Circus with Kyle” (Mooney) I usually love these man on the street bits with Kyle Mooney. The one he did before SNL 40 is one of my favorite moments of this season. This one was his weakest so far. (To be fair, he can only work with what he’s given, but maybe the circus wasn’t the best setting for something like this.)

“Cooking With Paul” (Johnson, Thompson) Here’s how bad “Cooking With Paul” was: Not even Kenan Thompson, who can usually mug and grin his way through any sketch, could save this one. Having Paul use a feminine voice and call up wanting to speak to what we assume is an underage boy? This was not the best of ideas.

Average Score for this Show: TK