Through five-and-a-half seasons of FX’s hit animated series Archer, we’ve learned so much about the world’s greatest gentleman superspy and his colleagues. For starters, they almost all love to abuse the ever-loving hell out of any substances, and unless they’re in the most serious of situations, they really f*cking hate each other. That’s just the tip of the iceberg when it comes to the personalities and bad habits of our last line of defense against the world’s worst spies, villains and cyborgs. On tonight’s episode, “Nellis,” we’re reminded of another problem that Sterling Archer constantly faces – he has no luck in traveling.

Sterling and the agents from the organization, formerly known as you know, have used a wide variety of transportation over the years, and in just about every situation, from automobile to space station, they’ve been totally screwed. In “Nellis,” a simple rescue mission gets pretty out of control, but this time, it’s because Sterling has some issues with very basic forms of transportation. He’s not allowed to fly, and he’s not allowed to take the train, and while it’s probably because he’s an uncontrollable lush, it might also have to do with these classic Archer travel mishaps…

The Assignment: Kill Skorpio, to which Sterling very wonderfully replied, “What, is diabetes busy?” Unfortunately, the assignment belonged to Lana, who chose to seduce the wealthy-but-disgusting man, and things got out of hand, naturally, when Sterling arrived to “rescue” her.

The Result: A poop-covered threeway with Skorpio and a luxury yacht that was blown to smithereens.

The Vehicle: A luxury rigid airship.

The Assignment: Complete with high-end shopping, delicious French cuisine and a casino, the Excelsior was supposed to be the sky’s answer to the Titanic. You know, except for the whole sinking and Rose letting Jack drown part. Sterling and Co. were responsible for ensuring its security, especially from any bombs that would blow it out of the sky.

The Result: While Malory was only using a bomb as an excuse to screw Trudy Beekman out of her luxury flight, there was actually a bomb on board, set by the Excelsior’s captain because, “Who the hell wants a two-day trip to London?” Ultimately, Lana and Cyril saved the rigid airship, but not Wales, from a gruesome explosion.

The Vehicle: “An airboat, Lana, just like Burt Reynolds in White Lightning.”

The Assignment: Stop Joshua “Gandalf” Gray’s quest to end the “systematic rape of Mother Nature” by blowing up an oil pipeline in the Louisiana bayou.

The Result: Sterling and Lana stopped Gandalf from blowing up the pipeline by unwittingly stealing his boat, but Sterling was still left stranded in the swamp to face his biggest fears – alligators, crocodiles and brain aneurysms. Lana, on the other hand, left with Joshua for an evening on the town, telling him of her new hair: “If you like the collar, you’re gonna love the cuffs.” 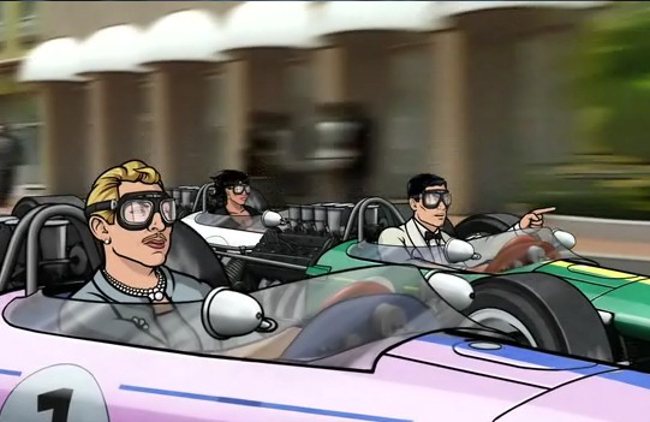 The Vehicle: A Formula 1 race car.

The Assignment: To obtain a data disk from Le Chuffre while protecting the $4 million in bearer bonds that was really the money from the 401(k) accounts of Sterling’s co-workers. Sterling gambled the money away, but Benoit (BALLS!) actually stole it and the new assignment became stealing the money back.

The Result: After a high-speed F1 chase that included an attack helicopter and rocket launcher, Sterling used his “situational awareness” to steal the money back from Benoit (BALLS). Unfortunately, Benoit (BALLS) and his stolen F1 race car didn’t make it.

The Vehicle: A plane, an emergency boat, a pirate ship and an armed helicopter.

The Assignment: Rip Riley was sent to rescue Sterling after he was missing for three months in the wake of the cyborg dick Barry killing his bride, Katya. However, Sterling didn’t want to return to his job, so he was a total A-hole to Rip and they wound up as prisoners of pirates.

The Result: Sterling and his puka shell necklace destroyed Rip’s plane and got them scooped up by money-hungry pirates from Pangu Island. Then Lana, Ray and Rip almost died, but they at least managed to keep the escape helicopter in one piece. Sadly, the same can’t be said for the Archers of Loafcrosse’s chances in the South Pacific Lacrosse Championship.

The Vehicle: A high speed train.

The Assignment: Escort a dangerous Canadian terrorist/freedom fighter for a sovereign Nova Scotia for the Royal Canadian Mounted Police. And as “Freddy Foreshadowing” predicted, his badass boys would arrive to make things difficult for Sterling.

The Result: The train suffered damage from a big explosion, but Sterling was at least able to live out his lifelong dream of fighting on top of a high-speed train.

The Vehicle: An international space station and some rockets.

The Assignment: Sterling and his team received crash astronaut training so they could go into space and save the International Space Station. However, they were only lured there so Lana, Pam and Cheryl could help the space colonists build their new Mars society as “baby factories.”

The Result: Thanks to Lana’s now-droopier boobs, the crew from you know was able to escape when cyborg dick Barry showed up in his own rocket, and in turn, Cyril destroyed Barry’s rocket and stranded him on the space station instead.

The Assignment: Recover a hydrogen bomb from a crashed B52 in the Bermuda Triangle. However, that was a lie, created by Cheryl’s brother to steal information that proved she was insane so he could steal her part of the family fortune. Also, Captain Hank Murphy had some nerve gas missiles that he wanted to kill a bunch of people with. He was a dick, too.

The Result: Sterling accidentally shot a window in Sealab and destroyed the entire underwater facility. The good news was that Cecil Tunt had it insured for a ton of money.

The Assignment: Get Cherlene from New York to Austin for a concert in 36 hours, which Sterling said was totally doable because he was trapped in his own awesome Bandit cosplay fantasy.

The Result: Pam’s insane cocaine addiction once again derailed the team’s hopes of selling the product, but her new friends in the violent biker gang were able to get Cherlene to her show. Sadly, the luxury bus did not make it.