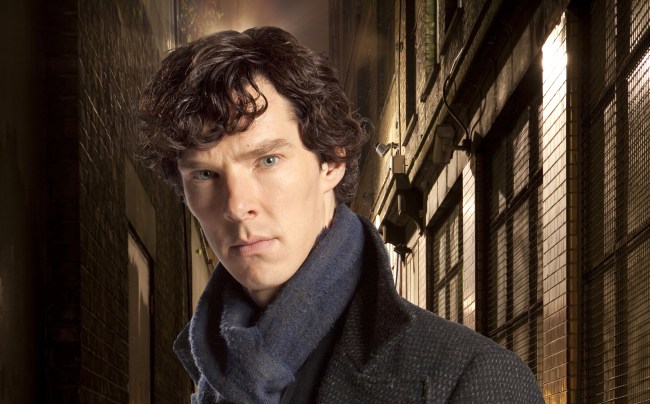 We have a while until the frightening and tough new season of Sherlock airs. So until then, why not speculate on the great detective’s sexual preference? Sure, why not.

Benedict Cumberbatch was a guest on Chris Hardwick’s Nerdist podcast a few months ago and during the conversation, the Sherlock star compared his character to that of Doctor Who by saying, “They’ve got different dress senses, different taste in the sex of their partners…”

It’s probably safe to say most interpreted that comment as a reference to each characters’ companions on their respective shows. However, that statement ignited the hopes and dreams of those yearning for fresh new Sherlock/Dr. Watson internet fanfiction everywhere. Could Cumberbatch’s Sherlock Holmes actually be…gay? According to series co-creator Steven Moffat, the answer is a resounding no.

Moffat recently spoke with EW on the subject, hoping once and for all to clear the air:

“We walk into that one all the time,” Moffat tells EW. “It’s a funny thing when a character for over 100 years has been saying, ‘I don’t do that at all.’ He’s been saying it over 100 years! He’s not interested in [sex]. He’s willfully staying away from that to keep his brain pure—a Victorian belief, that. But everyone wants to believe he’s gay. He’s not gay. He’s not straight. And Doctor Watson is very clear that he prefers women. People want to fantasize about it. It’s fine. But it’s not in the show.”