Humanity beware: this is probably how the Planet of The Apes will begin. This is a situation we can all learn from, one that began just like any normal day down in Patos, Brazil; everyone’s having a good time at the local bar until the monkey that patrons thought was their friend decides he’s sick of his evolved drinking buddies, downs a glass of rum, swipes a knife, then heads to the roof for a good old fashioned showdown. This primate is sick of it all, and he’s not going to take any crap that isn’t flying through the air, like it should be.

In what will likely go down as one of the strangest monkey clashes in the history of cell phone video, this monkey was able to fend off a bar full of men with his butcher knife until the fire department was able to disarm him then release him back into the wild. According to Brazilian blog Arede, this is what happened:

“It was a bar staff oversight that ended with the monkey drinking some rum and taking the knife. It appears to be a tame monkey, which was created by other people before, and was getting along with some people in the bar, but after the knife he wanted no man around. When men came close, he was aloof and there was a risk of someone being injured.”

Uh, yeah. there was definitely a risk of someone getting injured. Look at this monster. Look at his FACE: pure fury. 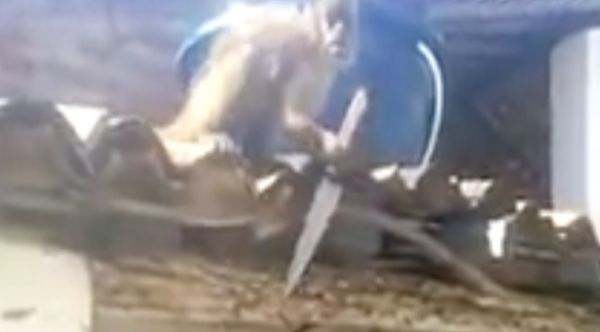 After being captured and subsequently released by authorities, this Bronson-like chimp escaped and started threatening more people

“We had to recapture him because he was causing problems and threatening children living near the reserve . We are with him and we will forward it on Saturday to the Brazilian Institute of Environment and Renewable Natural Resources ( IBAMA ) in Sousa. There, they will evaluate whether the animal is able to return to the environment or if you will need to live in captivity.”

It’s arguable that this monkey is more frightening than the re-booted Michael Myers. At least with Michael you could reason with him somewhat, and he wouldn’t really go after kids. This monkey has no feelings, and he will likely kill you if given the chance (and enough rum).

(Via Death and Taxes)