Some more basketball is back! Yes, I know, this is the official NBA Bubble Watch column but, if you have not been watching the WNBA in its triumphant return, I don’t know what to tell you. It’s so good! Fast, relentless, competitive, the skill and the moves are frankly unmatched. And just so cool? But sure, NBA basketball has also started this week, too.

It was a slightly slower week in the Bubble given this return to regular play. Guys spent their downtime close to home (hotels) instead of exploring the world (big pond full of stocked fish, golf course), but there was still some decent downtime to chronicle. 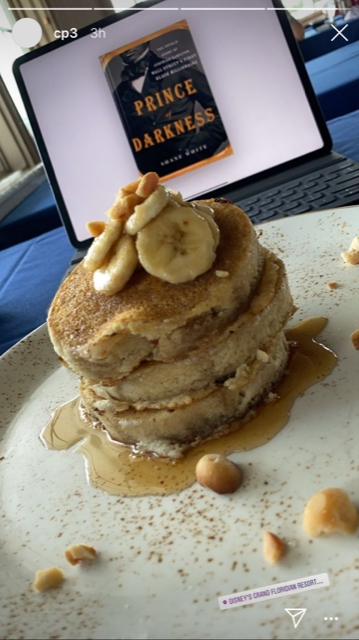 Let us begin with the prince of darkness himse—just kidding! CP3 sat back this week with a stack of flappers, and queued up his e-reader for the world to see. This isn’t Jeffrey Russell on good vs. evil throughout history, nor is it the vaguely prophetic, antichrist conspiracy theories of Grant Jeffrey. This is the largely unknown story of Jeremiah G. Hamilton, the first Black millionaire on Wall Street. It’s a good book and its author, Shane White, had to scour endless ancient newspaper clippings to find enough on a man the largely white tellers of history did not want to talk about.

Rating: If we’re talking real ratings it 3.6 on Goodreads (those reviewers are a little much at the best of times, tbh) and 4 ½ stars on Amazon. But this is a 10/10 reading situation from Paul. 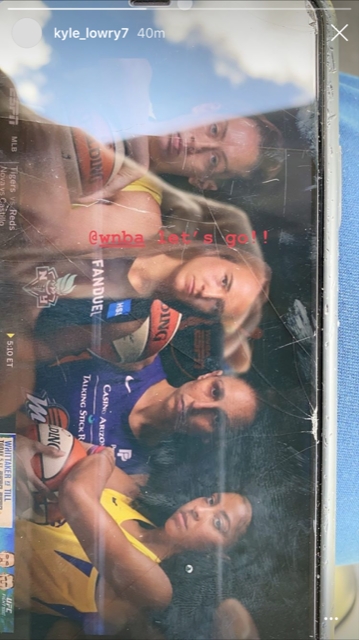 Best in the business, most tenderhearted and underrated— no, none of this is biased — Kyle Lowry was stoked for the WNBA restart, propping up his VERY, uh, well-loved iPhone to catch the first games of the Wubble season restart. Something about all those gashes and nicks, this angle, makes Diana Taurasi, who is already hard as hell, look harder as hell. Here for it.

Rating: Surely Lowry has honoured his 3-year minimum Canadian absolute highway robbery phone contract and is due for an upgrade? 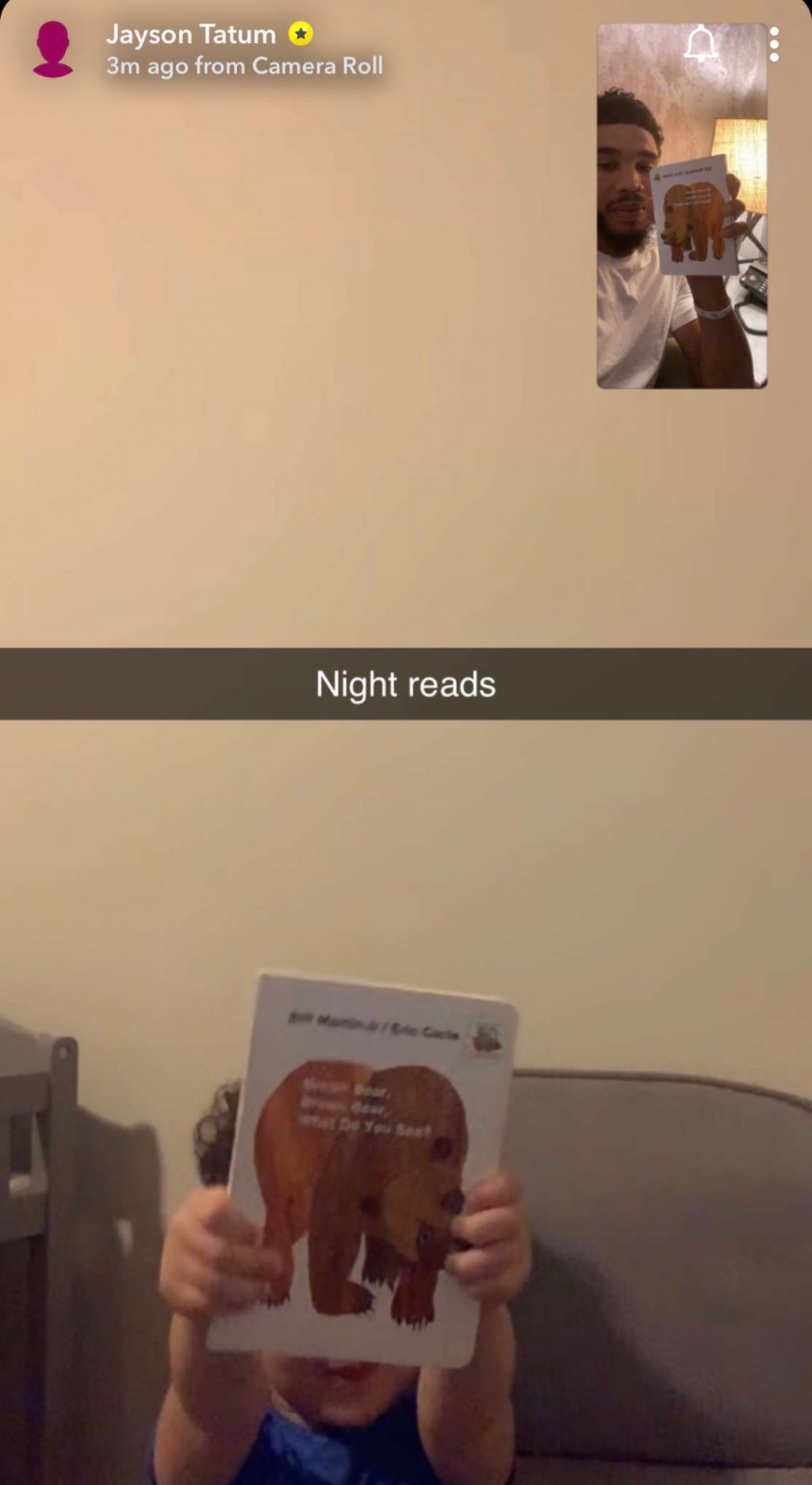 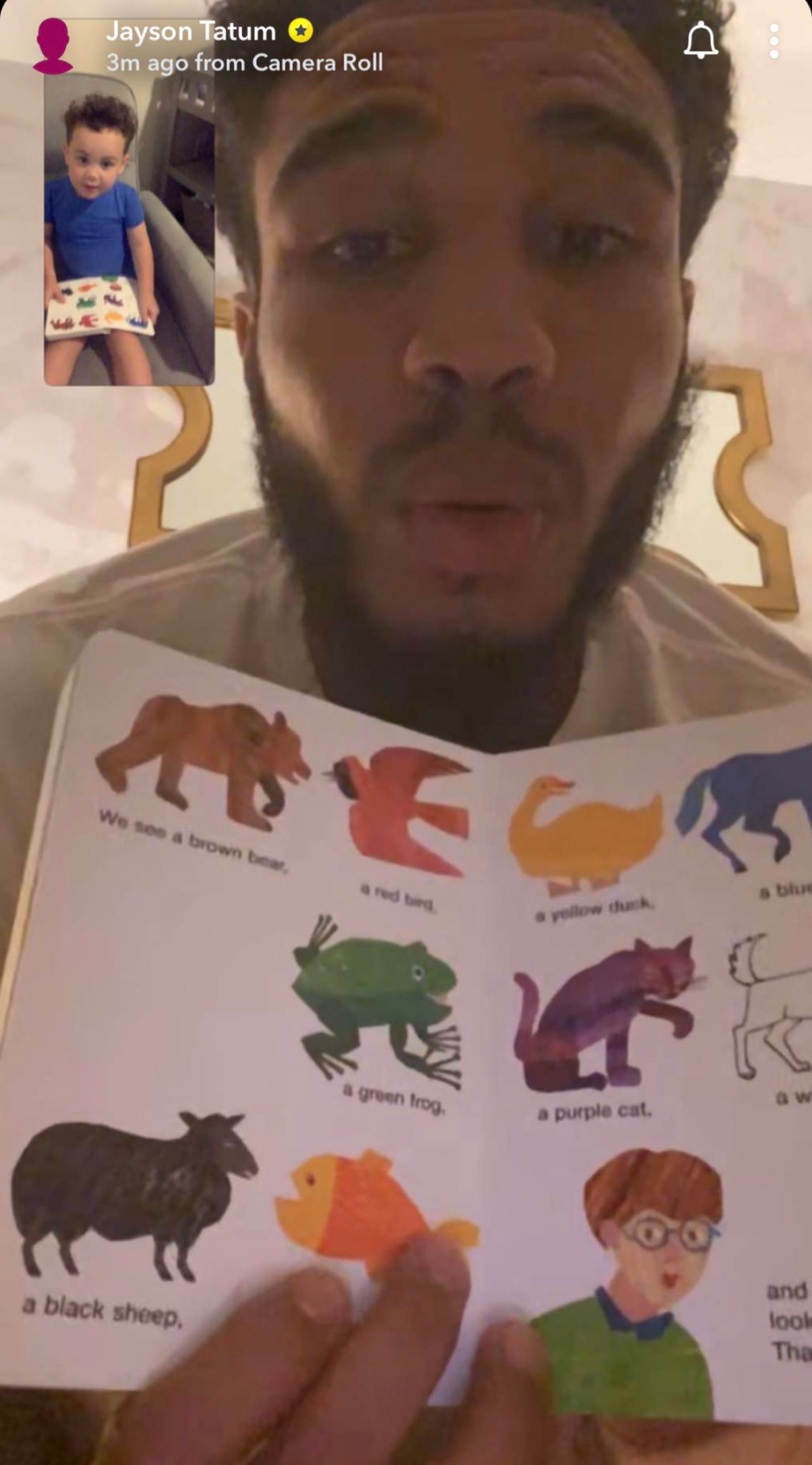 I love to toss a real gut-wrencher into these things to keep your tears fresh and sense of loss sky-high! Tatum brought all his son’s favorite books into the Bubble so that he could read them alongside him every night before bedtime. 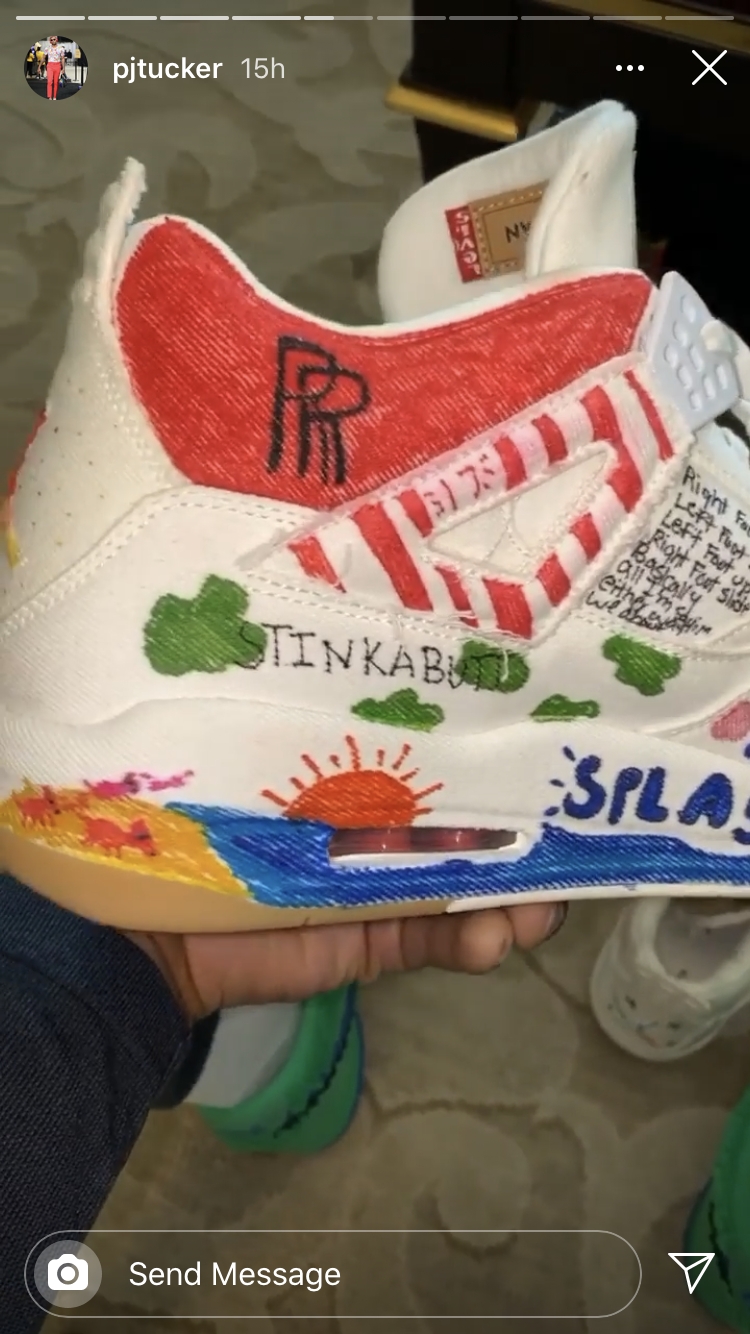 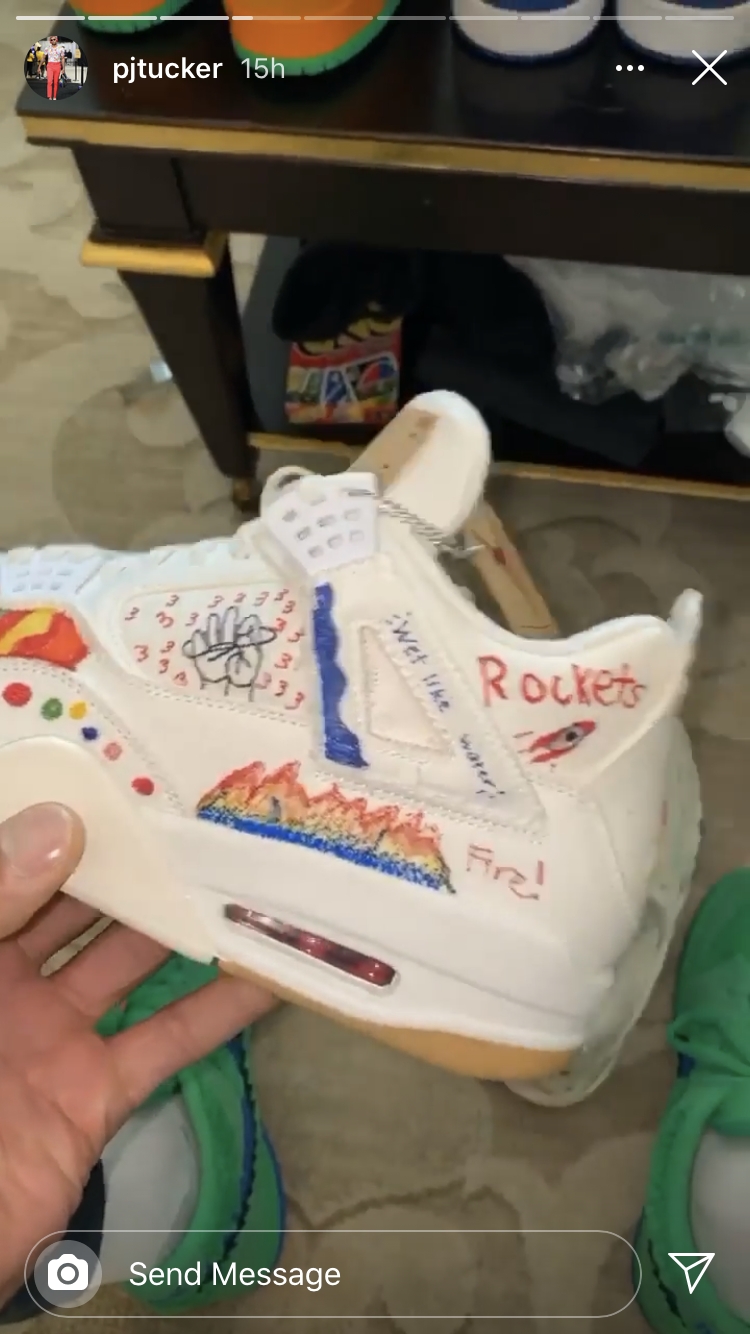 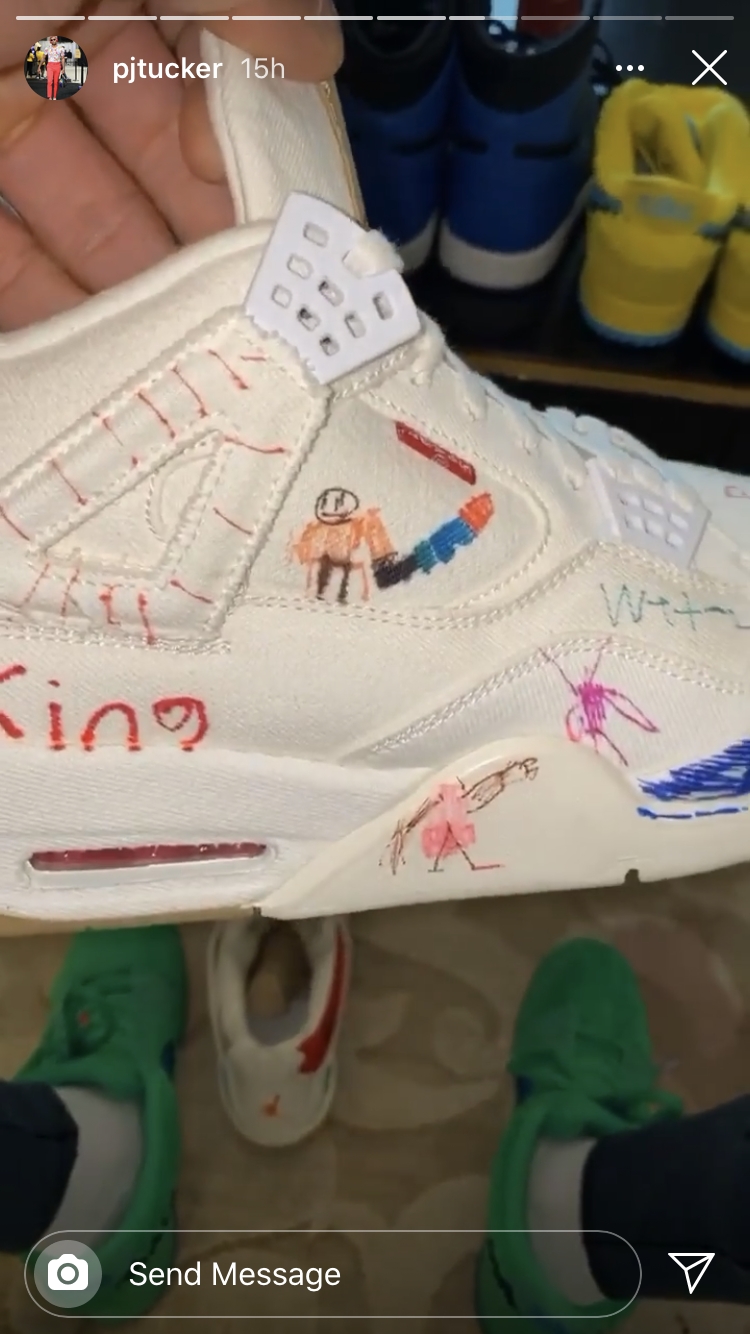 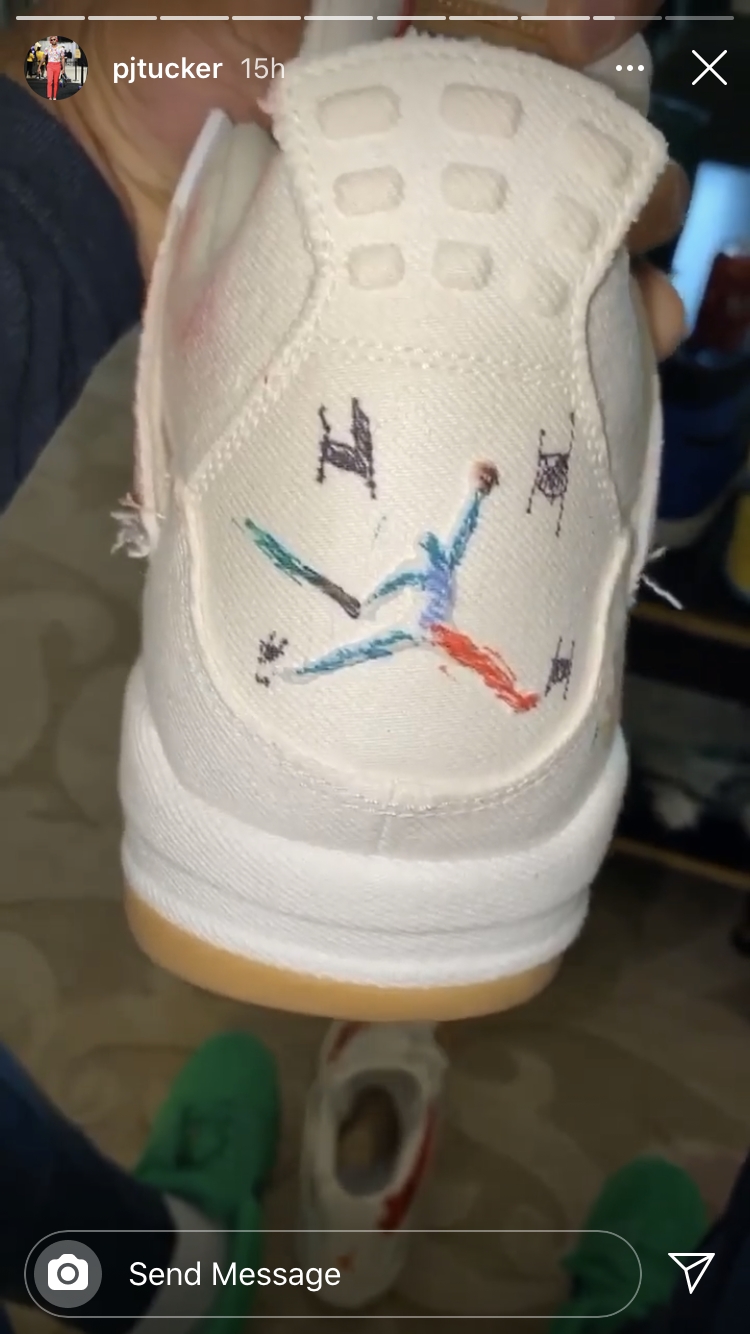 Tossing two gut-wrenchers in here, for good measure. Tucker, the only living man who is allowed to call having his kids draw on his sneakers a “collaboration”, showcased the end results. Zoe, his daughter, drew a better rendition of the Rockets logo than the actual Rockets logo, did a toe covered in multicolored bubbles for the Bubble, emphasized words like “Splash” and “Fire!” with water and flames, and wrote Stinkabutt, which Tucker revealed is his nickname for her. King on the other hand got wild and weird. He slapped down a bunch of stick figures (“I have no idea who this guy is,” Tucker said pointing one out who looked to be holding a 7-tier ice cream cone) and gave the Jumpman a lightsaber.

Rating: He’s gotta wear these every game, right? Or else we gotta get new ones every month the Rockets hang on. 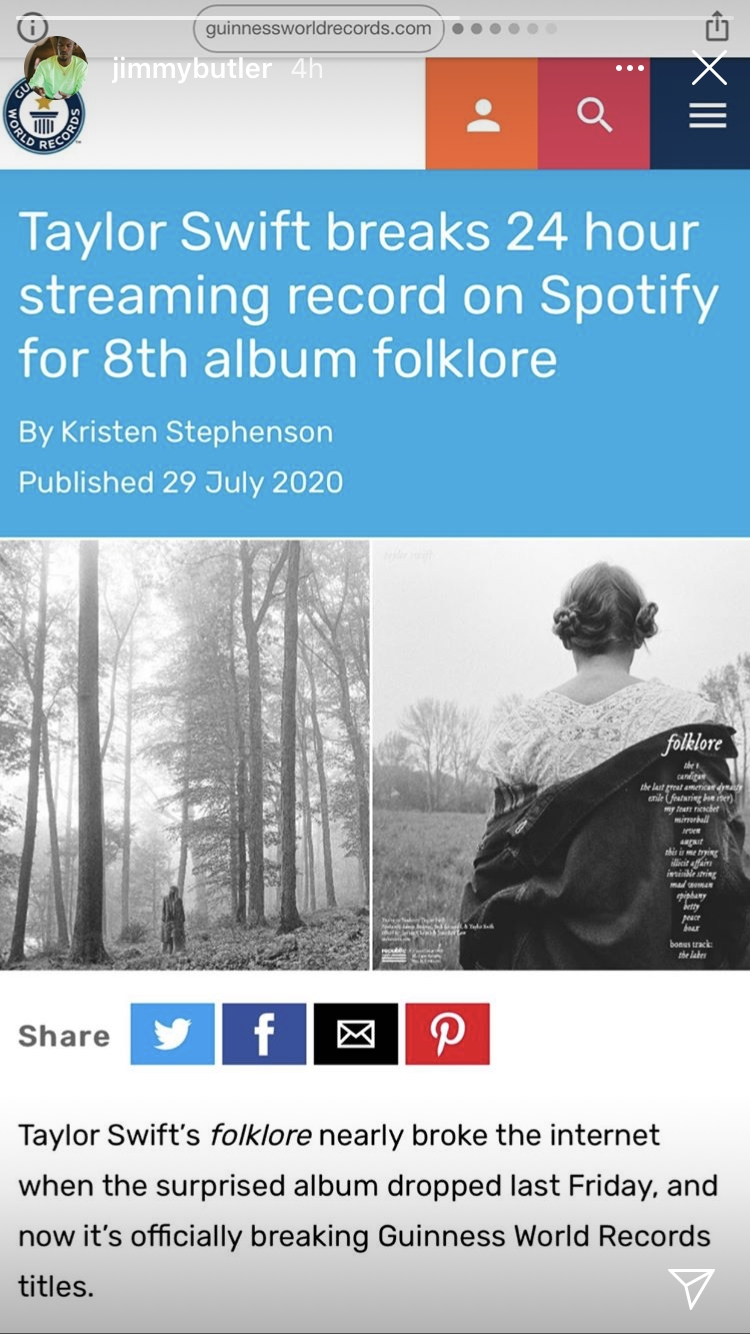 Look I know this doesn’t really count for player activity but if you picture Butler having a listening party for one to folklore, wearing his cowboy boots, tapping on the floor and making the person in the room under him call the snitch line AGAIN on him, then it does.

Rating: This isn’t even a music website, this is the Guinness Book of World Records website. I just realized Butler probably has this as his homepage, checking for who he can challenge at anything, in any given moment. 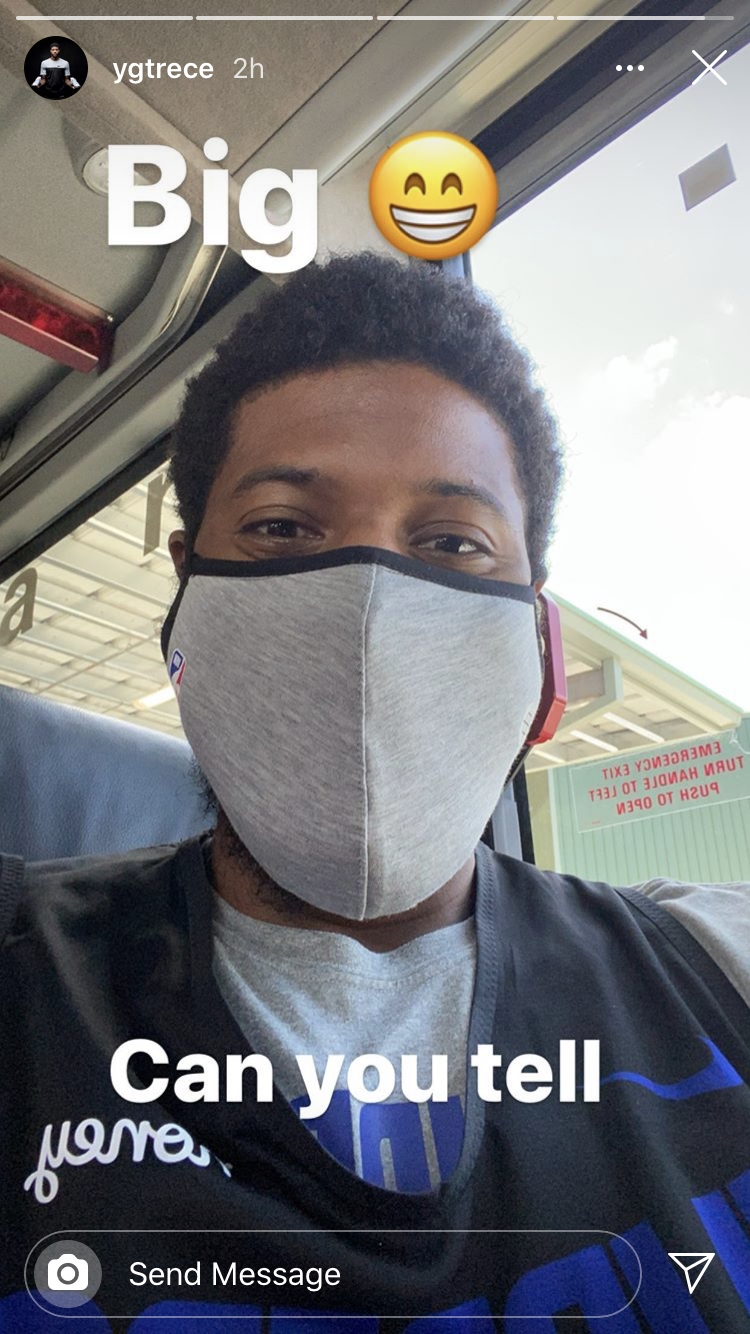 OK, but picture this and it’s Kawhi.

Rating: Actually Kawhi should do realistic masks where it looks like his mouth in a lil smile. Free million dollar idea for you, New Balance. 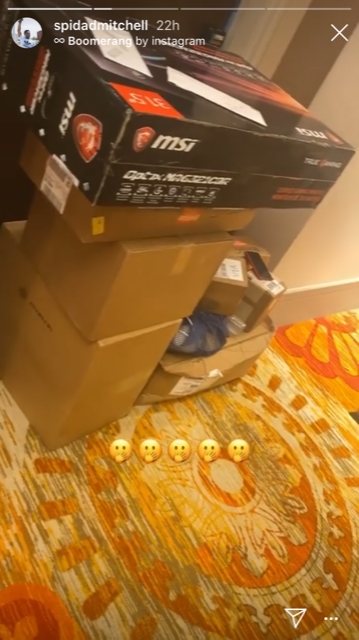 The big mail days continue in earnest for Mitchell, who has been having packages pile up outside his hotel room door for weeks now. Some have been, worryingly, manhandled to all hell. I know one of the rules of the Bubble would be that mail delivery was on players, but is it arriving via Dumbo without his magic feather?

Rating: Because he falls without the feather, you know? 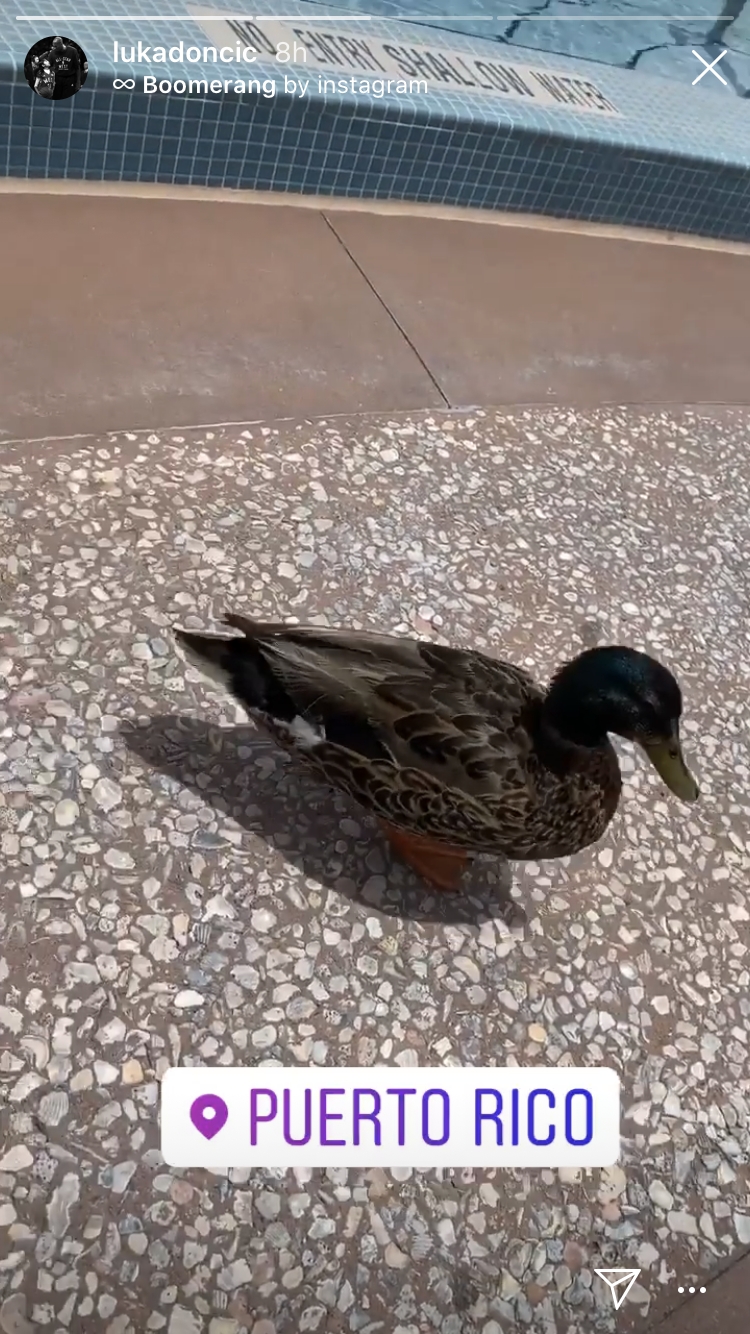 This guy loves the long joke. Doncic was back at it again this week, tagging places he was in and things he was doing in them at Disney as much more remote and tropical locations. This duck got to be in Puerto Rico for a short while, I hope it enjoyed itself. 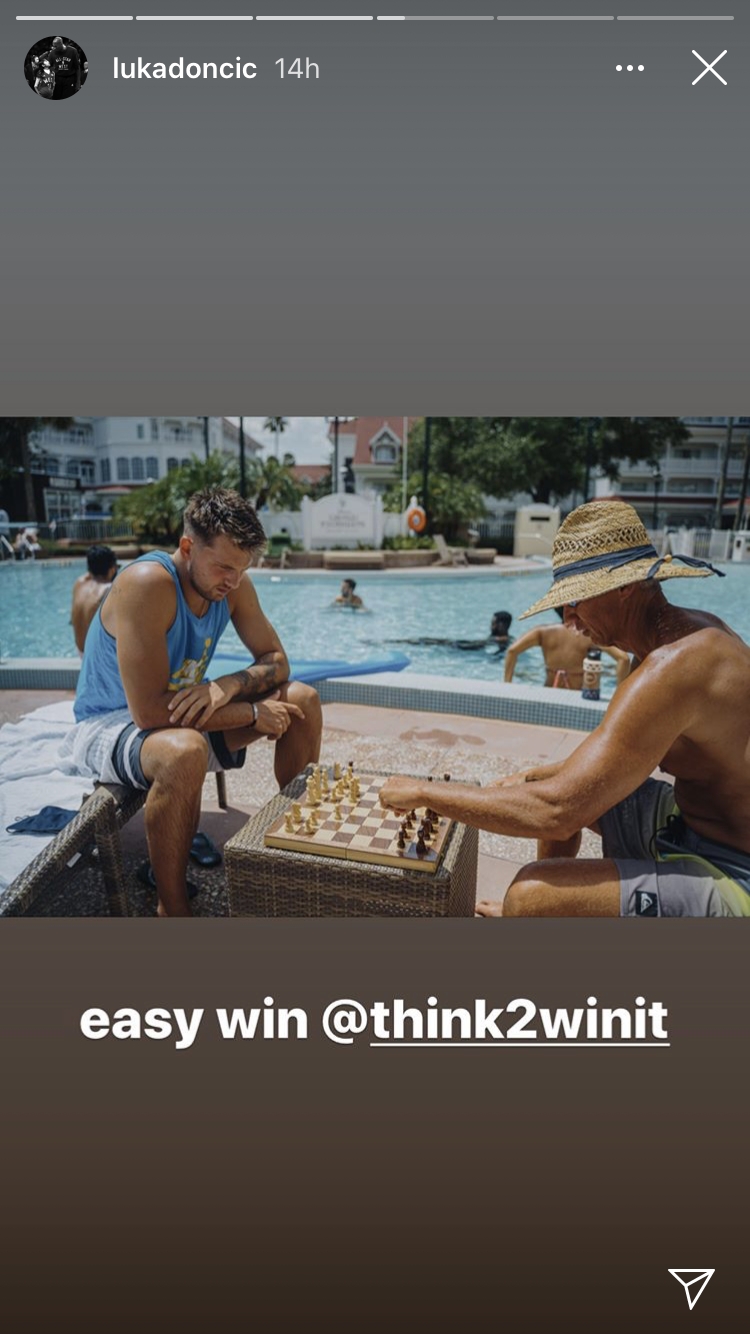 But finally we see the very nice resort pools being made use of. It’s too blurry to see who all’s in the background but I picture them playing Marco Polo as Doncic hushes them over the concentration he must pay to the game of kings in the hot, swampy, Orlando sun.

Rating: This pool, I can smell its aquamarine tang (just chlorine) from here. 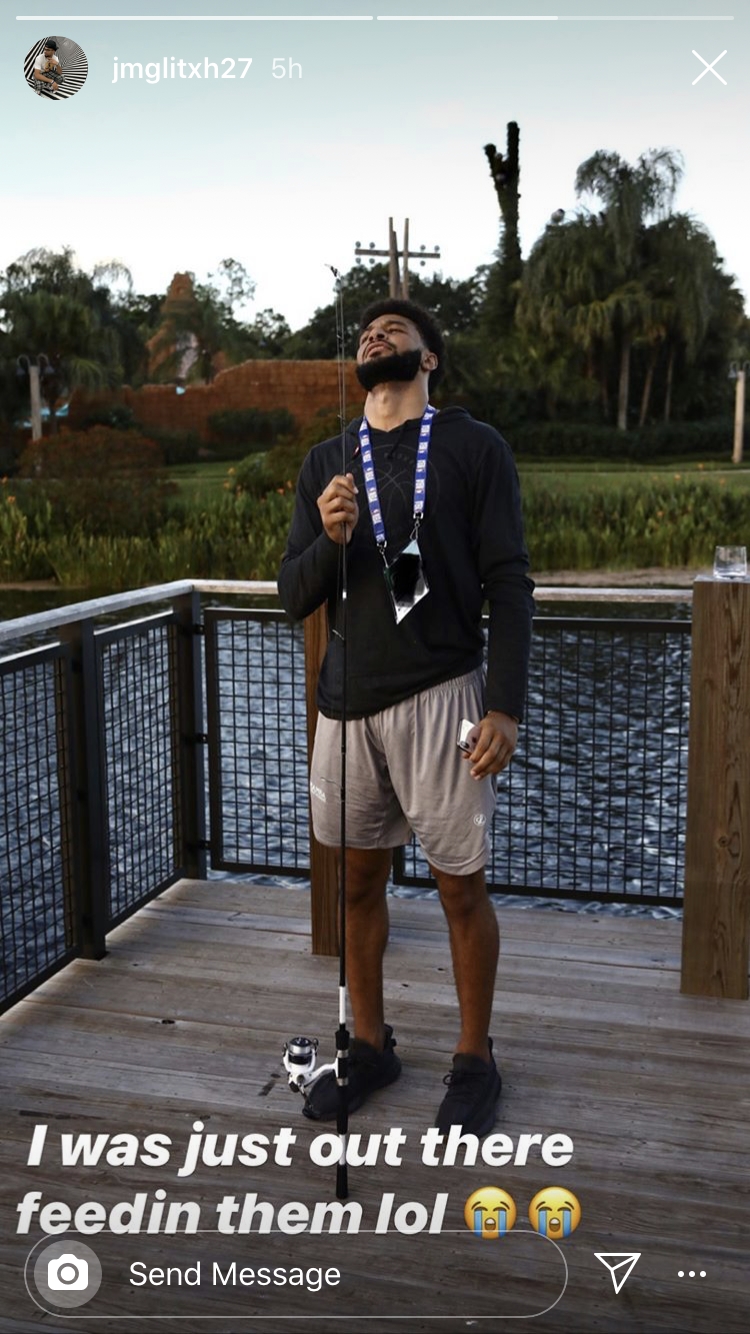 Murray had been one of the last to get out on the water and try his hands at the ancient art of angling. Poor guy. He didn’t have much luck but he treated a lot of lucky fish to dinner this one, magic night. 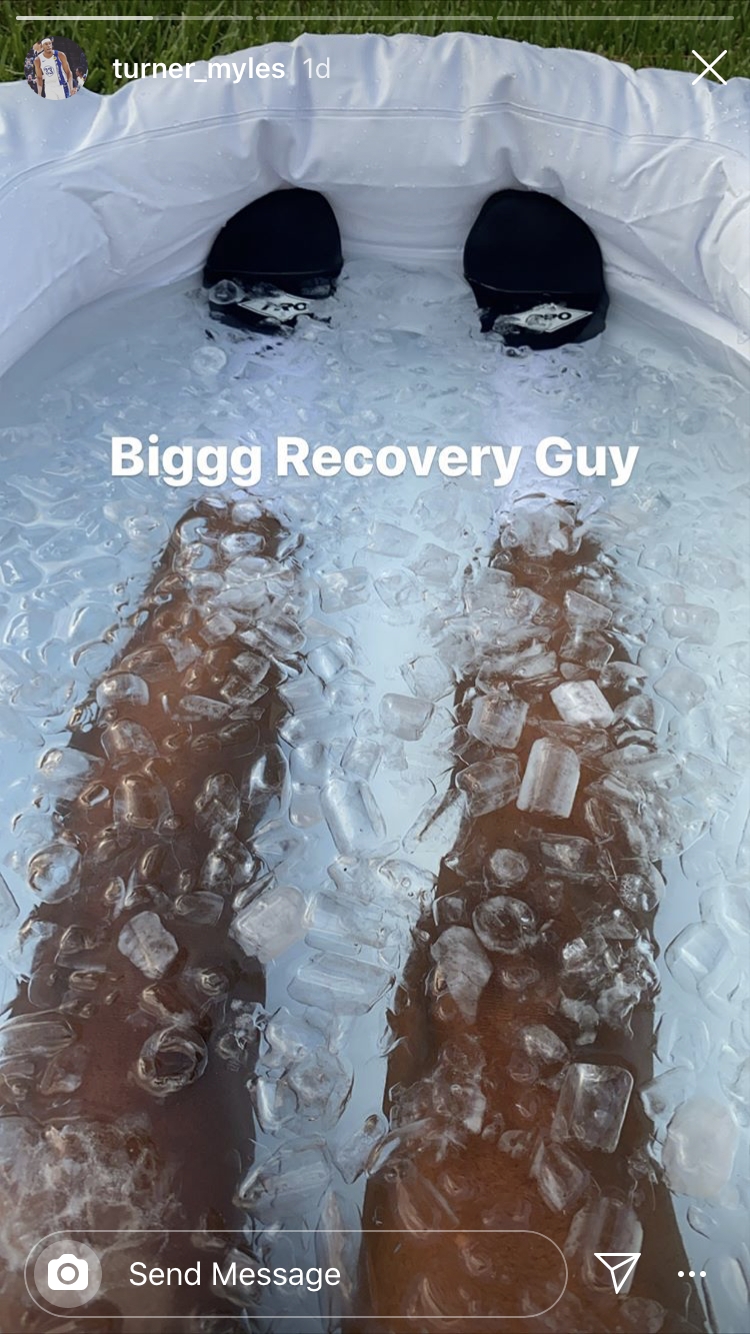 The portable ice bath has become the real unsung hero of the bubble. A lot of guys have upgraded from hotel room bathtub and infinite ice buckets of ice machine ice to inflatable kiddie pools set out off the well-kempt paths of the park. Turner made a point to highlight his being a “Bigg Recovery Guy”, and then a lurking Mo Bamba made a better point. 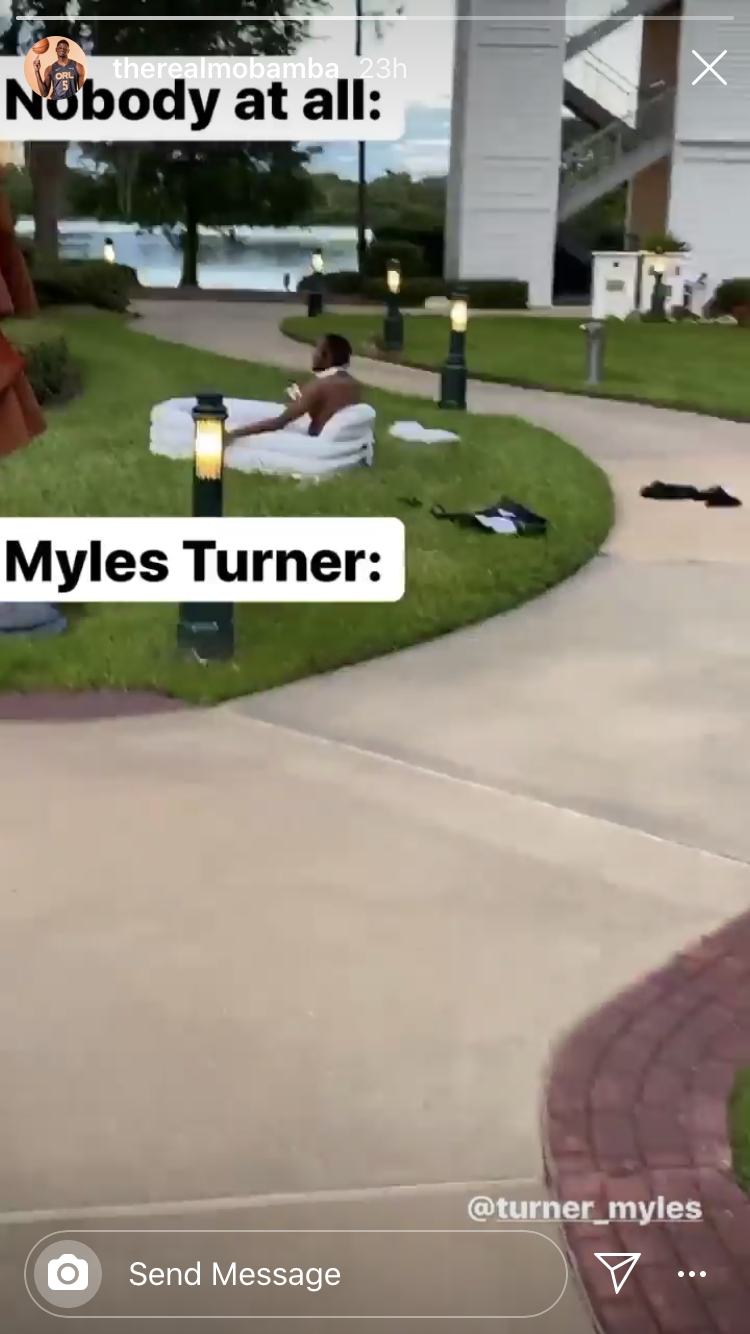 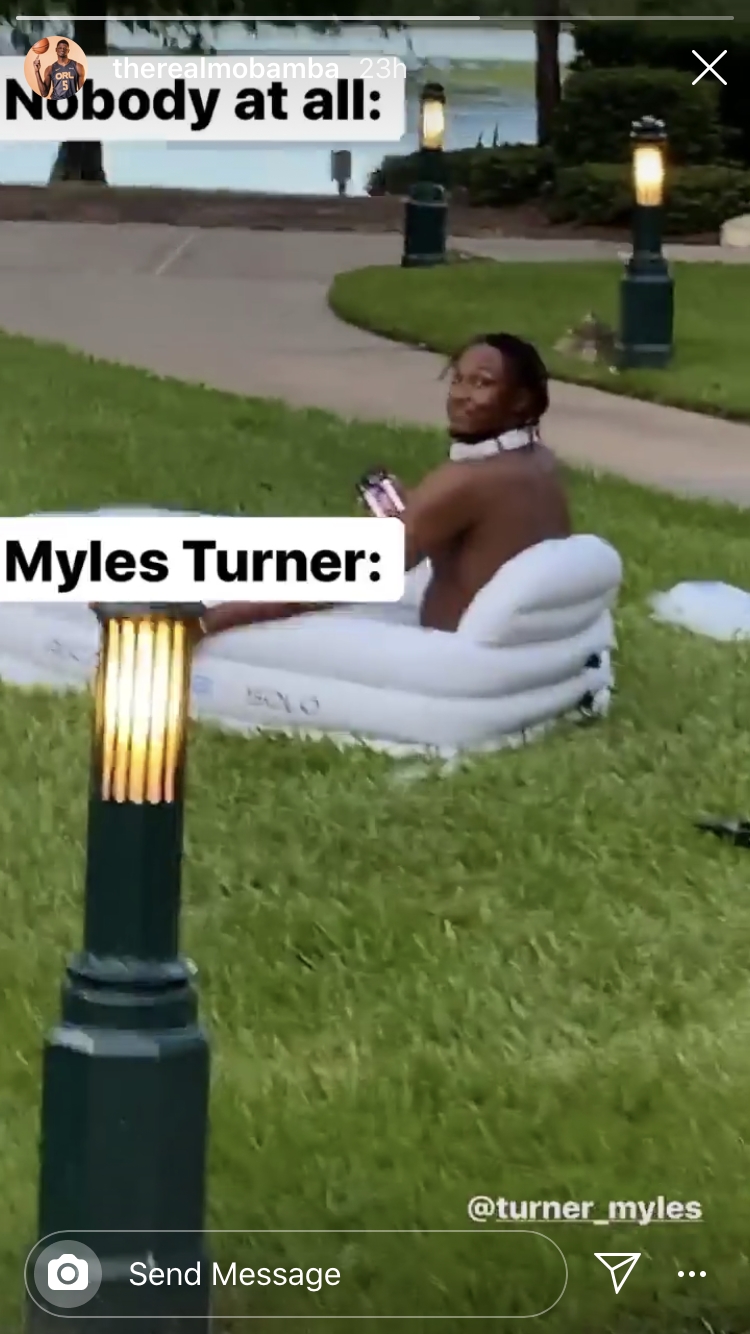 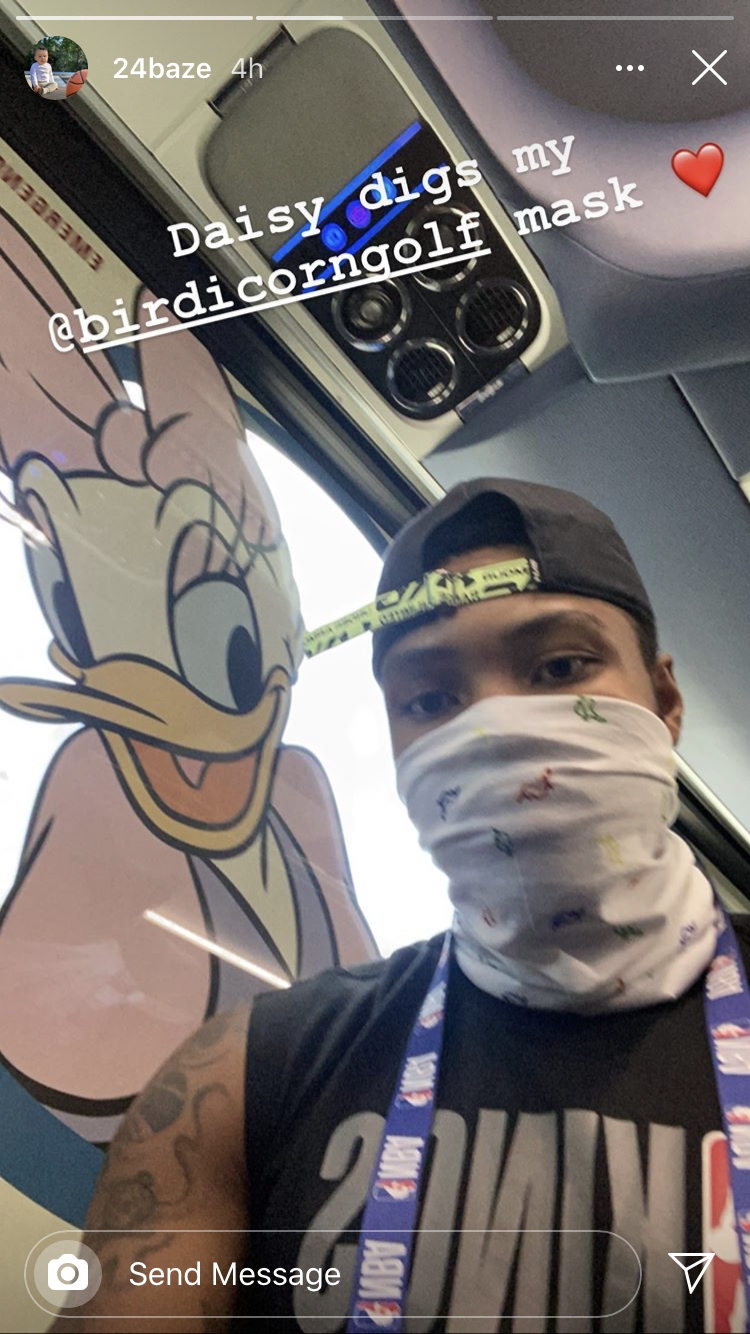 Baze loves golf so much he’s wearing it on his face. 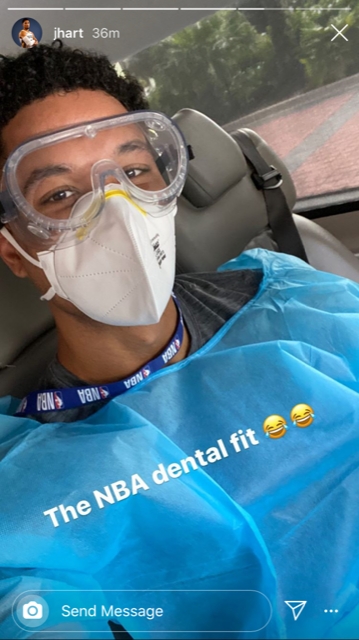 Hart had an eventful week. He took care of his chompers and paid a visit to the Disney dentist. I know you want to picture Goofy and the gang in dentist scrubs and gloves, holding the tooth cleaner and waterpik close up and approaching your mouth, but also quit picturing that because it would be so much scarier than the regular dentist already is! They’ve got no depth perception or fine motor control. Jk I don’t think he went to see a dentist, I think this was just some extra protective PPE he tossed on. 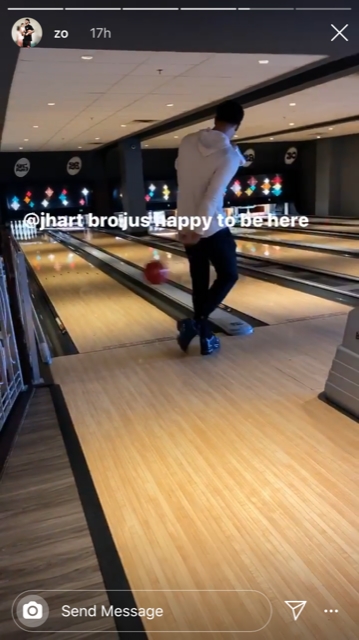 To take the edge off after his “appointment”, he went bowling with a bunch of the Pelicans. You can’t see it too well from the still, but he’s holding a giant slurpee cup in one hand and he’s just spun and flung the ball one handed, behind his back, with the other down the lane.

Rating: Whether or not there will be a Best Bubbler award at the end of all this, Hart is certainly acclimatizing with the greatest of ease. 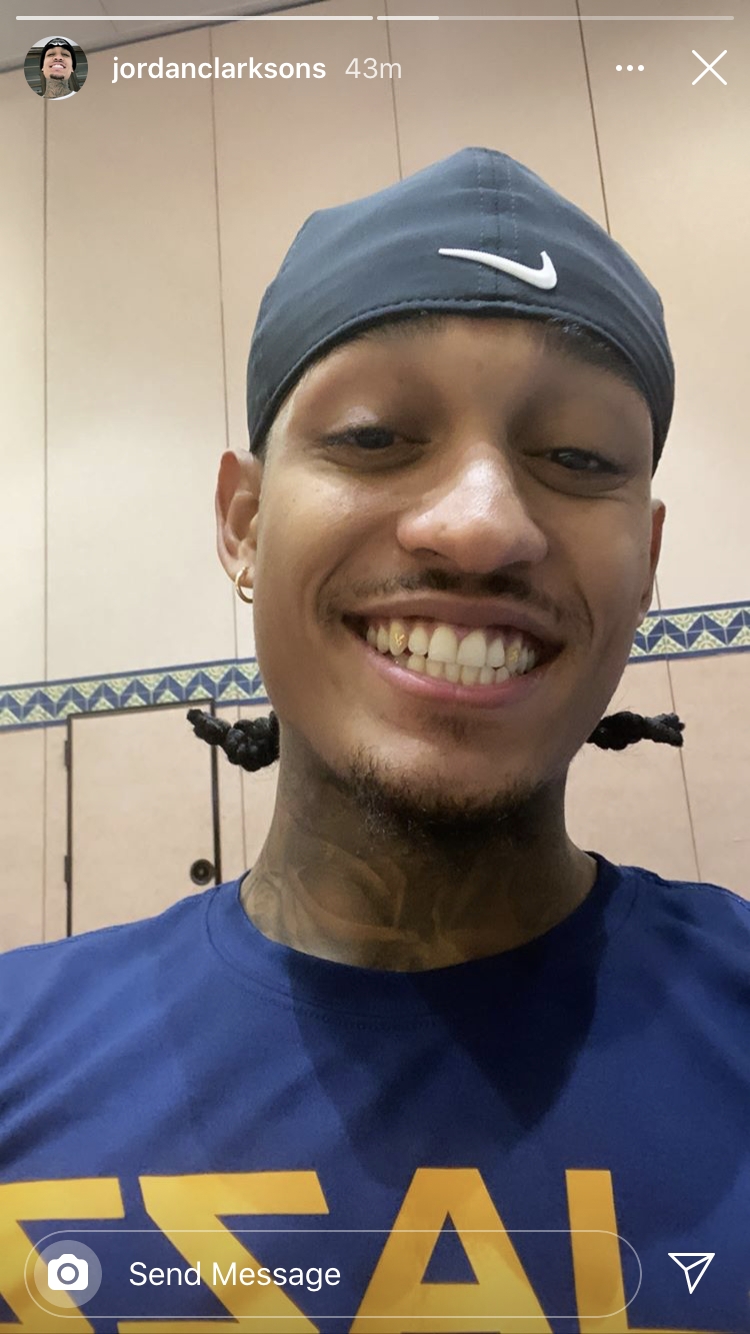 This is just a picture of Jordan Clarkson grinning in a hotel ballroom turned practice court.

Rating: Figured maybe you needed it. 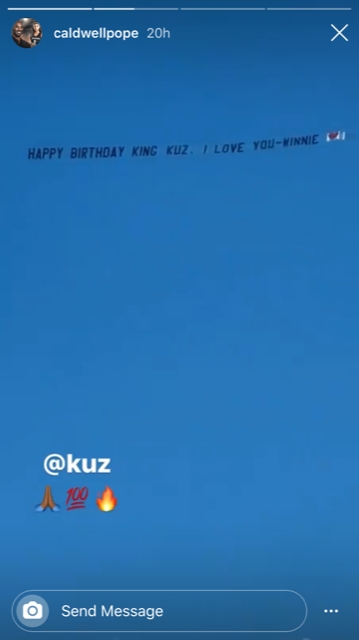 It was Kuzma’s birthday this week and his very thoughtful gf, Winnie Harlow, rented a plane to toot around the sky over Disney with a lil message for him.

Rating: How does this work? You pay in intervals of time? Asking for me, of course, and the way I’m going to announce Myles Turner Overdrive to Myles Turner in an ice bath.

Bobi was zooming around the Bubble by land, sea, and oh, I guess air too, when his feet left the ground during scrimmages before this week’s official restart. There’s no stopping Marhanovic. John Wick knew it, and now you know it too.

Rating: It’s me Boban!!! Is something you can scream out loud, for free, any time you want to. 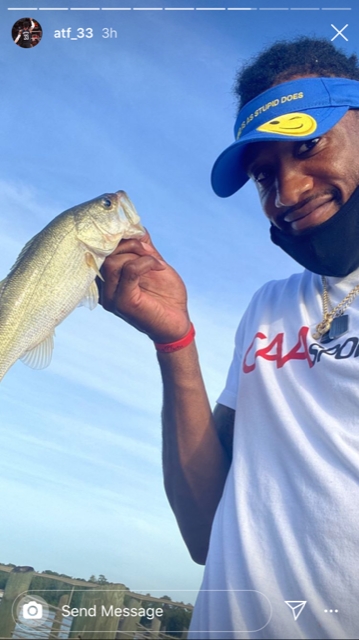 Another guy who is taking the Bubble in stride is Rob Covington. Take a good, long moment to take in the details of this photo. His “who me?” shrug with a fish very casually in one hand, his “STUPID IS AS STUPID DOES” visor which is at once very loud but incredibly subtle, somehow. 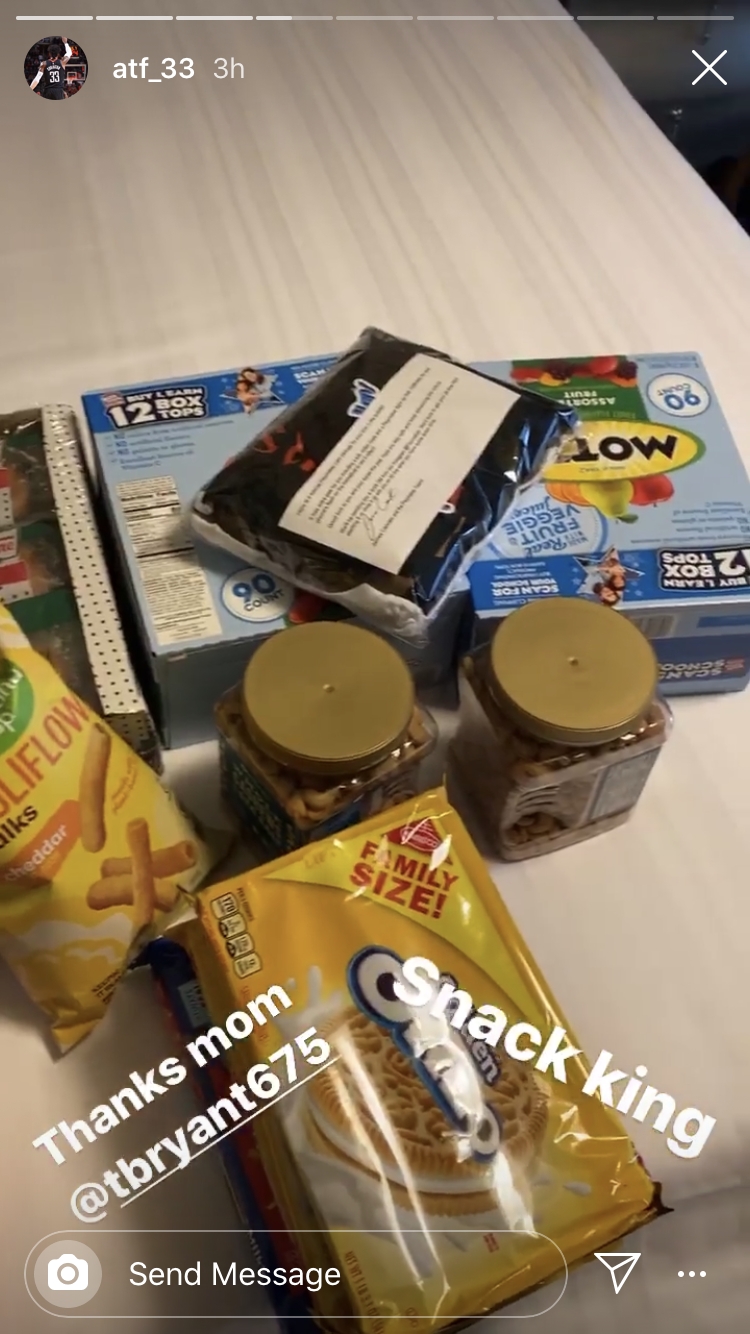 He later retired to his room to find an all-time snack delivery and thanked his mom, who sent it all through. It’s hard to keep the “It’s like summer camp!” thing about the Bubble going when it’s really a many multi million dollar, high intensity experiment, but this let me believe it for a second.

Rating: You dropped this Snack, King. 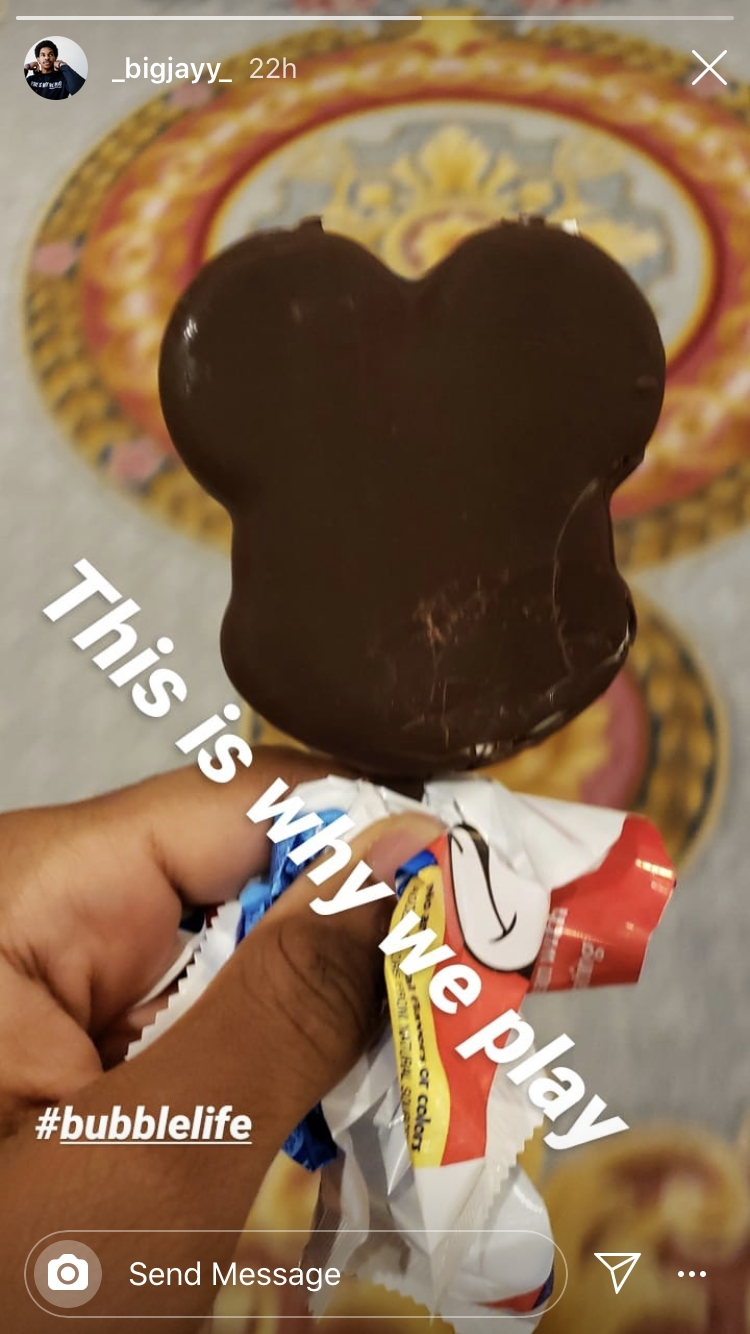 Allen is a man of few words and many broken hearts (mine, thousands of times over!) and here’s another one. Co-opt the NBA slogan and slap it over a melting Mickey Mouse head made of chocolate and ice cream, I’m right here with you.

Rating: Are these things… gratis?