Crimes featured heavily in isolation this week! Art crimes, being a fan of crimes, hair crimes, fashion crimes, literal trespassing crimes, spice crimes, political crimes — name a crime and it is probably here (well, not the worst ones, don’t get weird). Is this all just drumming up intrigue to get you to read on, knowing full well all those crimes could not have happened? Not in Self-ISO?

You tell me, when you CSI: Self-ISO and go over the evidence to see what crimes have transpired here this week. 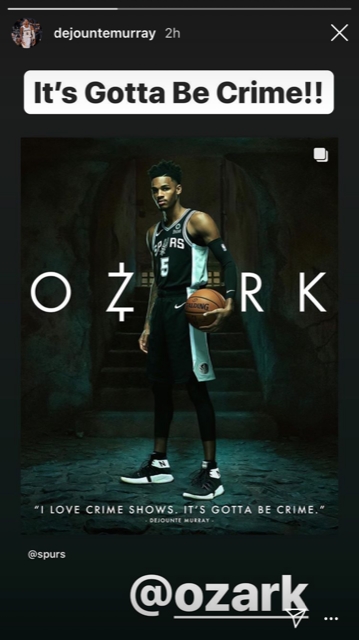 You know, the thing about life during quar-time is that something you might have otherwise enjoyed in passing can instead become the singularity of your day, your week, your conceivable future. For me, that was San Antonio’s Dejounte Murray sharing a story from the Spurs account of him superimposed over the Ozark logo. Below it, in case you thought that was it, is a pull-quote from Murray confessing his love for crime shows, and that for him? It’s gotta be crime. If you thought THAT was it, you’re a fool!! Because Murray wrote over the story with his own, deeply emphatic and pressing demand that if it’s gonna be anything, it had better, so help you, be crime! It’s Gotta Be Crime!!

Yes of course, Kuz’s baby bunny of a puppy, Snoh, continues to thrive, but I am asking for you to direct your attention away from her wiggly butt for just a sec to take in the fact that Kyle Kuzma is one among many this week who, in lieu of the court, has taken to the canvas for relief. From what we can see in this subtle reveal is a painting primarily concerned with the moon in a sky on fire. Volcano? A specific circle of Dante’s hell? We’ll have to wait to hear from the artiste on this one. 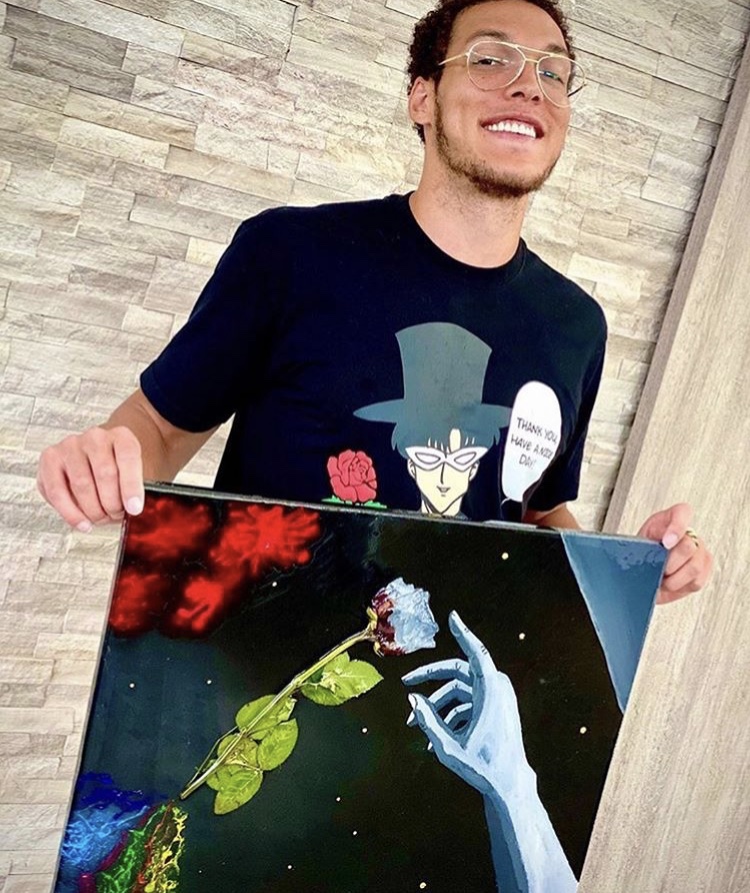 Another budding member of the NBA’s painting renaissance, you’ll know from these hallowed social media scourings, is Aaron Gordon. Confined to his palace in the swamp, Gordon has been working on a piece for weeks now, and it’s finally finished. A grey, disembodied arm hovers in space, reaching for a (real) rose, while around it, solar flares, or maybe blood? blooms.

Rating: Art is subjective, sure, but look how happy this art’s author is! 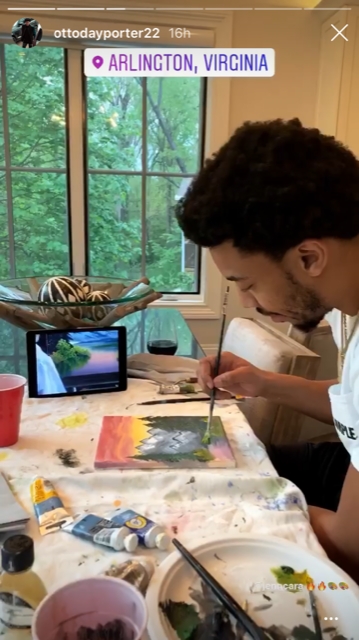 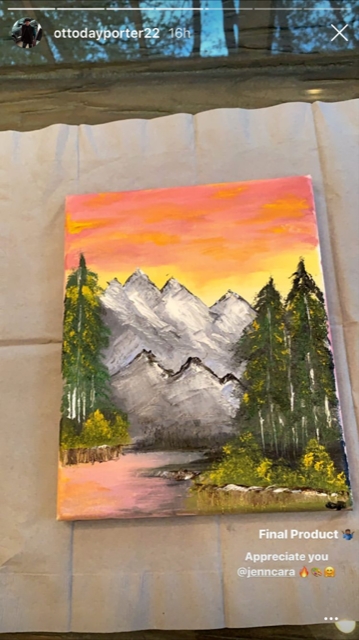 Otto Porter Jr. joined the painterly post ups this week. He was teased a little bit in the process, first, “What are you, some kind of Boss Ross?” before it was revealed that he was, in fact, watching Bob Ross and painting along to the legend. The next time you’re in an anxiety spiral think of Ross calmly encouraging you to put that rock, that tree, that cloud, wherever the hell you want it. Porter Jr. did and look how happy he became! 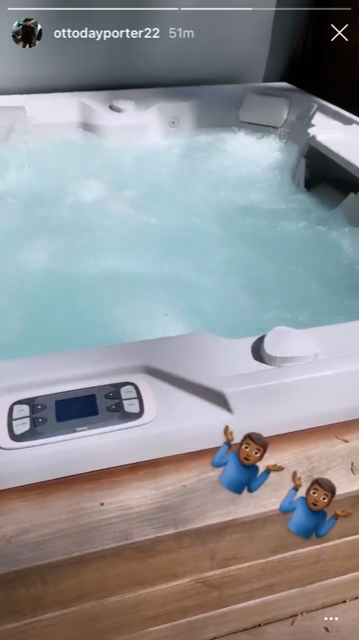 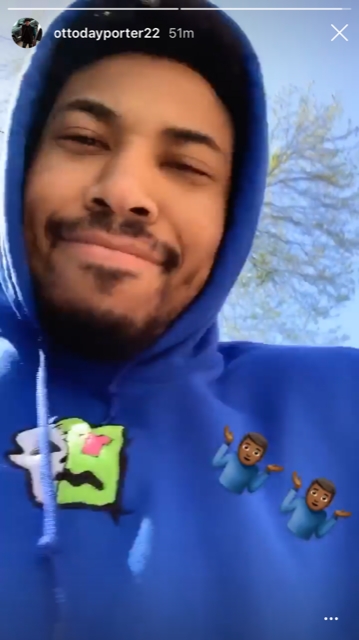 He fired up the outdoor jacuzzi and then turned the camera on himself, doing a kind of shrugging little jig.

Bradley Beal (with an assist by Jimmy Butler) 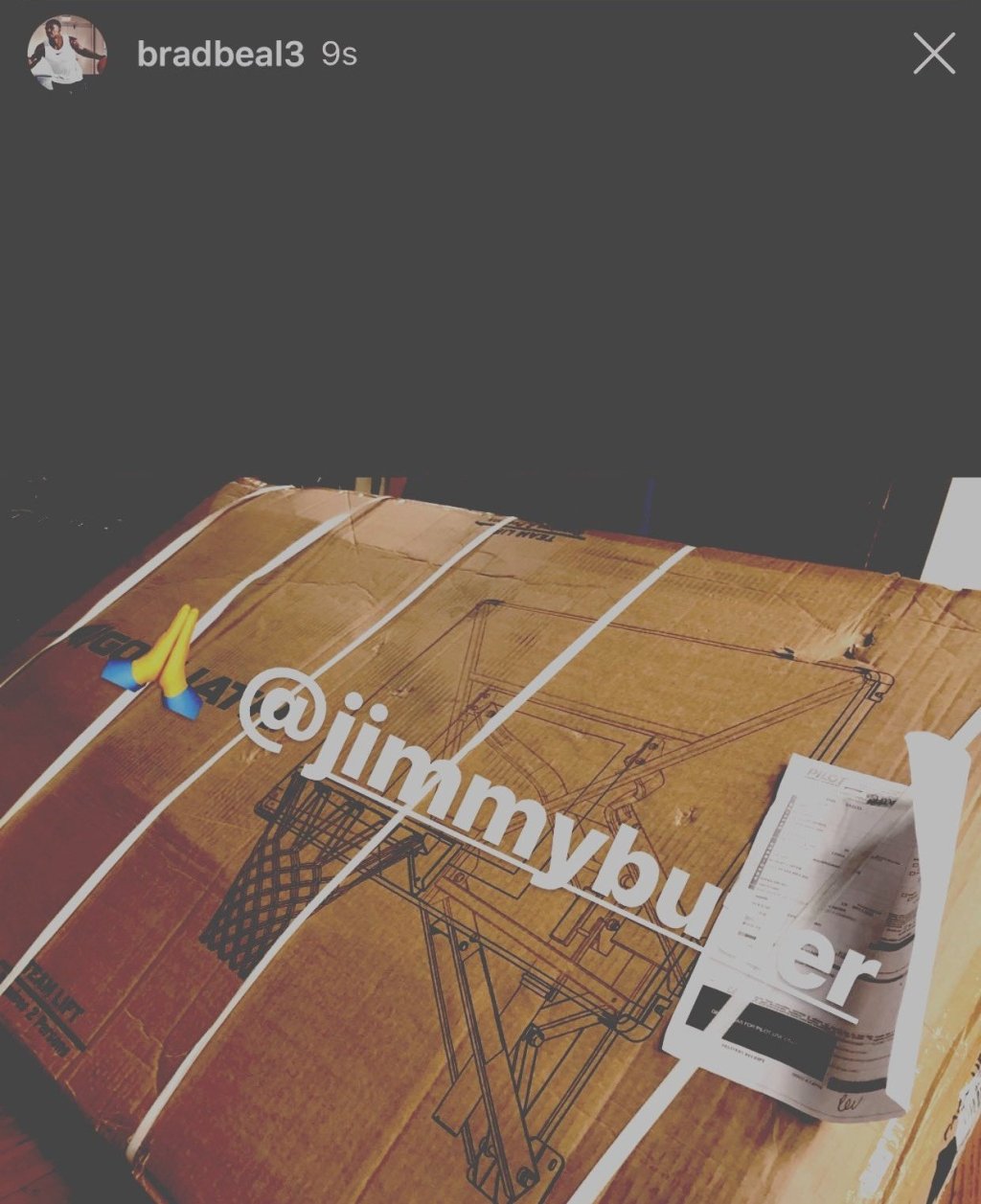 Rating: Is it called tampering when Jimmy Butler does it? Or is it just being himself. 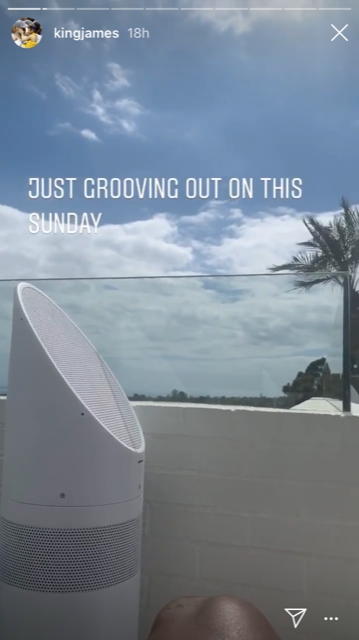 Me too, Bron, me too. But “Sunday” is every day and “grooving” is oscillating between accepting time going by in a mostly chill way and wondering how to deconstruct its very meaning as it continues to slip, warp, and absolutely slam dunk on my rational sense of it as a concept.

Rating: Is that big industrial vent looking thing a speaker that makes it sound like you are inside your favourite instrument, playing just for you? 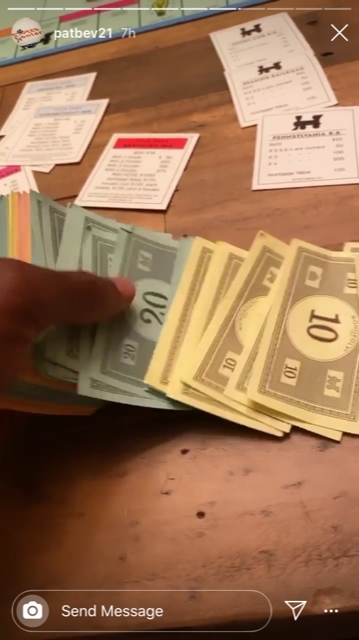 Bev broke out the big bucks and laid it all on the table in a game that, I’m not sure even in isolation people are willing to play for days and days upon end, losing all respect for their families, themselves.

Rating: Safe to say Patrick Beverly is a fan of a reliable and long overdue high speed rail system. 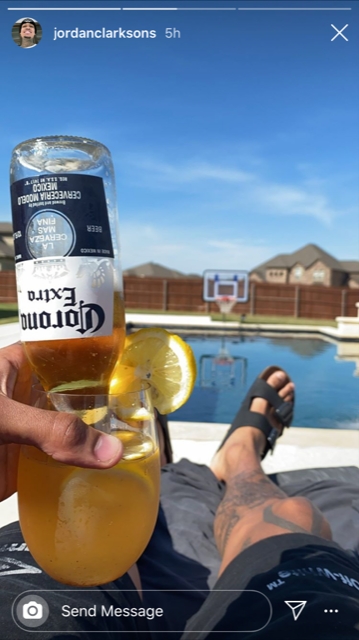 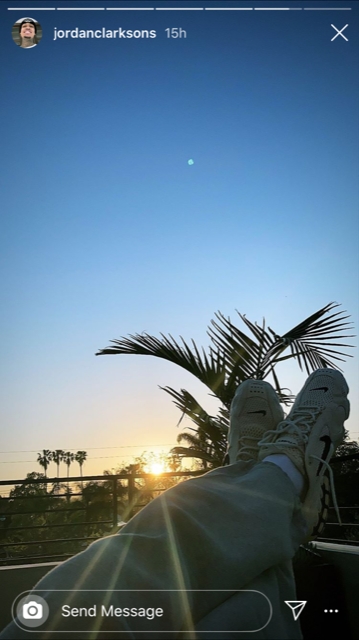 Clarkson is a huge fan of taking it easy, and taking advice from the experts with utmost respect and grace. This week we saw examples of him doing both, and reminding us all that it’s possible to make bulldogs (upside-down beer in margarita drink) at home, and that’s probably the only place where they won’t be incredibly overpriced.

Ok so, we know from the past few weeks that Russell has been out on a yacht a few times, cruising around in the ocean. What we have not yet approached is the possibility that Russell might just be living on a boat, at this point? I mean otherwise, a dock just flooded with late-day sunlight is probably not anywhere close, in a proxial sense, to your quarantine.

Rating: This is one mystery I am in no hurry to solve because it remains soothing as all hell.

Good god does Paul Millsap continue to do it. Here we see him attempting to learn to do cartwheels “on the [planet emoji]”, a.k.a. earth. Do I miss his forays into magic and the arcane? And I can’t believe I’m admitting this — yes! But what if the real magic of Paul Millsap is just him being himself?

Rating: There’s a real chance that Paul Millsap has learned how to do a cartwheel before you and I did and you know what? It’s the opposite of being ashamed. I feel a deep, humbling joy. 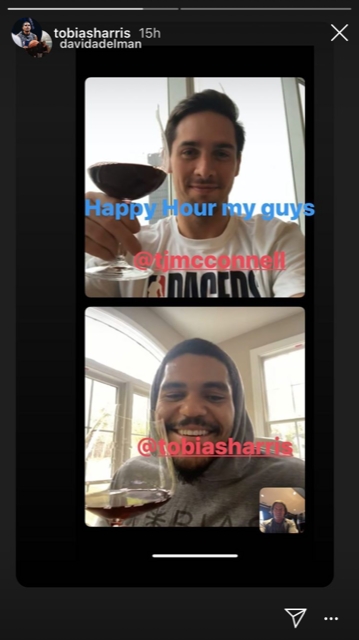 Rating: Heartening for us and for their cardiovascular health, according to medical professionals! 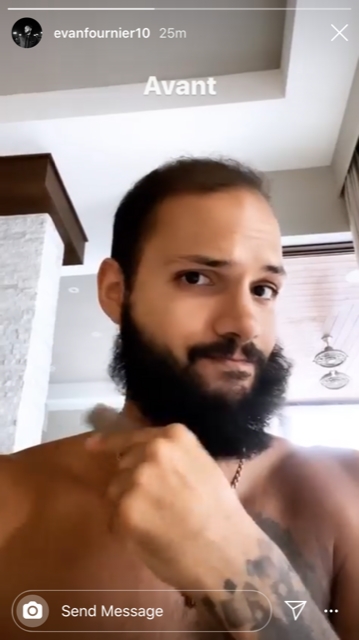 Evan Fournier, however you feel about him, has a striking look. He just does! Smoldering, even. But this week he decided to do something drastic and the results, I’m not happy to report, aren’t great! He shaved his head in real-time, half at a time. The whole thing, not just the top. 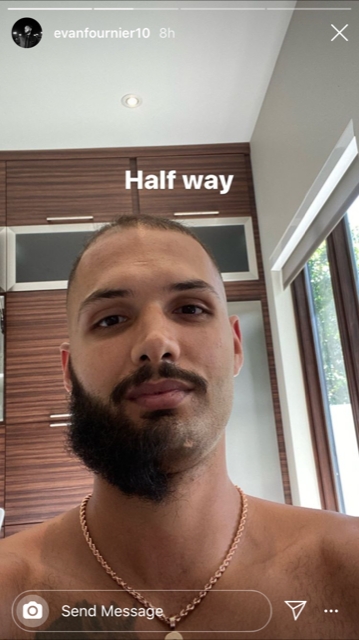 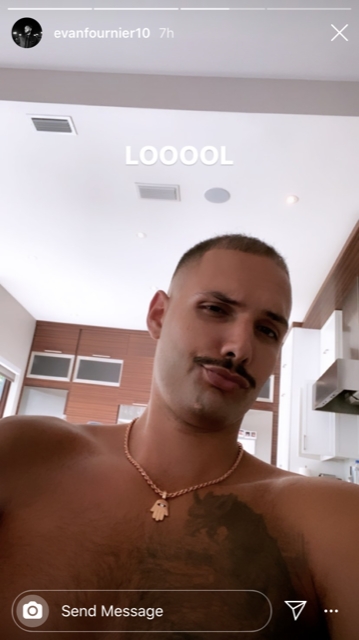 With just the moustache and a little bit of fuzz on top he looked fine! Serge Ibaka, Marc Gasol, some really handsome guys are going with the ‘stache in ISO and it’s working for them. But the problem is that Fournier didn’t quit. 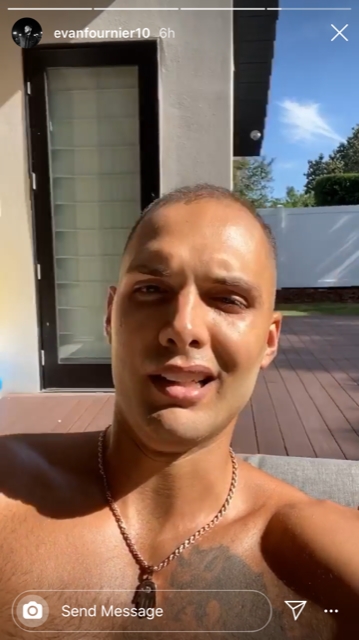 He shaved his face and seems to have oiled up, showing the final result in a very blinding, very I Wish You Warned Me To Put My Sunglasses On I’ve Been Inside For Weeks Now And Have Not Seen A Light Source This Reflective way.

Rating: It grows back, sure, but will our corneas? 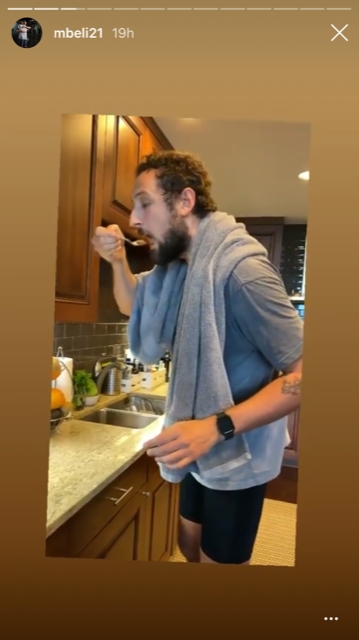 Beli did the cinnamon challenge and I have two hypotheses on it. Either he’s been practicing for eight years when the peak of this challenge hit, or he eats cinnamon by the spoonful all the time because he has literally no reaction. Even going into it, all he gives us is a very cool Allora before taking down the spoon as if it were no more than a refreshing taste of a negroni. You can see the whole video here.

Rating: Now I know why he’s got that fedora tattooed on him, true gangster. 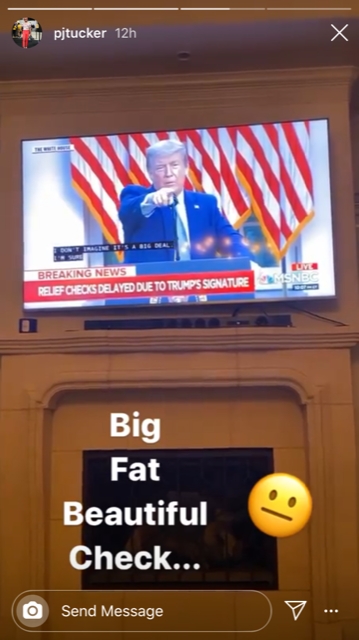 Tucker took a brief break from organizing his sneaker collection and driving around topless in a convertible to take in one of Donald Trump’s deranged press conferences. His reaction, and my hope, is it was proof enough he should get right back in his car and spend his precious time elsewhere, doing what matters.

Rating: What matters, always, is P.J. Tucker driving around topless in a convertible! 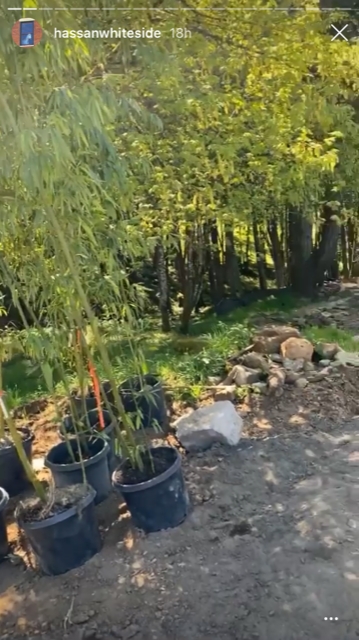 Whiteside has been considerably renovating his home in Portland for some time now, all the way back to the start of the season. I get the sense that now that he is home more, he’s taken a closer interest in the progress, because he spends a lot of time down in a pit that might become a pool and celebrating when landscaping shipments arrive. His bamboo forest came this week, he was stoked.

Rating: Zen and the art of being a big man who’s an even bigger fan of bamboo. 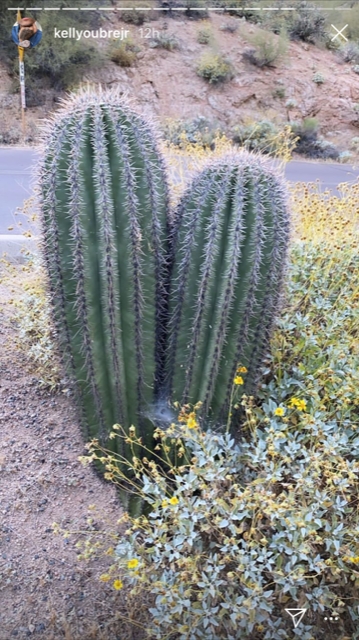 Oubre is typically a solitary guy. He seems pretty content to go his own way. But this week, he took a couple trips and the takeaways were: a photo of a lonely turtle, a photo of a pair of Canada geese, and this photo of a cactus, also kind of a pair.

Rating: Is he lonely? 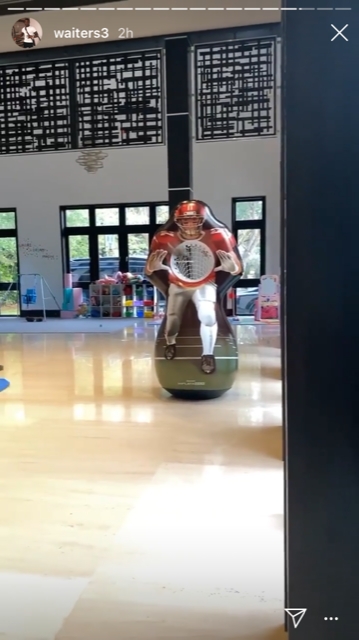 Taking a breather from rollerskating up and down his hallways and bringing a bouncy castle into the living room for his kids, Waiters either rented or owns and set up one of these football pass practice bobbly things. Is Big Dion Waiters’s favorite movie? Was all his furniture delayed in his move from Miami to L.A.?

Rating: Is staying “permanently playful” some new mindfulness workout regime of the pros? 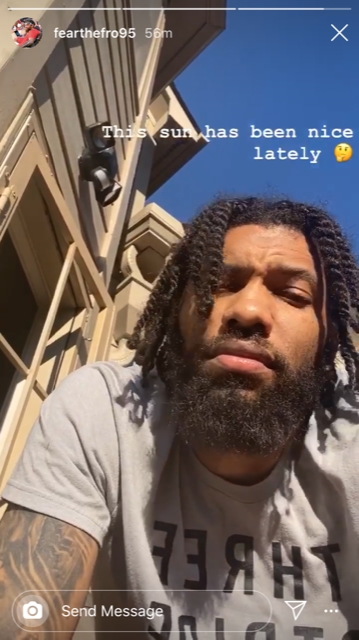 Bembry got pretty thoughtful about the sun.

Rating: Excellent PSA for all of us in Self-ISO to remember to get our vitamin D, ten minutes a day is all it takes.

Looney got pretty thoughtful about the sun and his view.

Rating: Excellent PSA for all of us in Self-ISO to practice safety at heights. 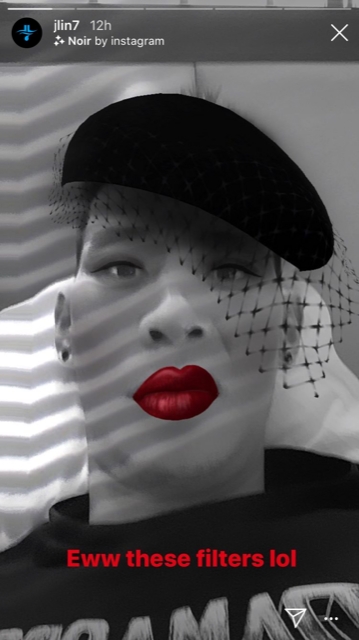 He might be out of the league but he’s an NBA champion, and Lin used his downtime to get familiar with Instagram’s full range of filters.

Rating: Excellent PSA for all of us in Self-ISO to dress up if we feel like it. 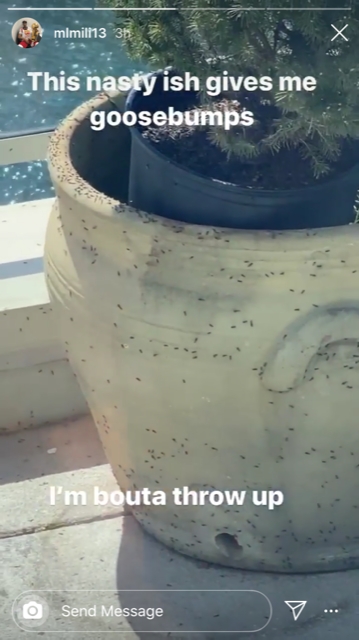 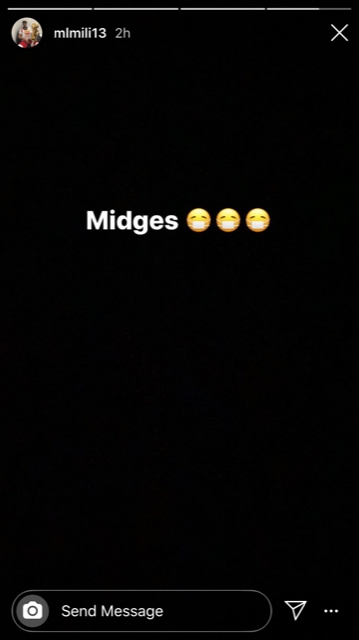 He’s been here a couple seasons now so there’s a chance he’s experienced this, but it could also be the first bad midge season Miller has gone through in Toronto. These tiny, disgusting flies swarm the shores of Lake Ontario in spring and even if you’re on a condo balcony however many stories up, they’ll find you. They swarm when they’re mating, which makes them blanketing your balcony, your car, or the clouds of them you accidentally pass through even grosser.

Thomas did a bizarre “challenge” where you put your phone up somewhere high and record yourself shooting it with a nerf gun and knocking it down.

Rating: I mean, he nailed it.

Beaches featured heavily for Pierce this week, who seems to keep visiting them alone and maybe some that he shouldn’t? First, he traveled to one he assured viewers was “secret” and started to run down the sand toward the road and beyond it, the ocean. 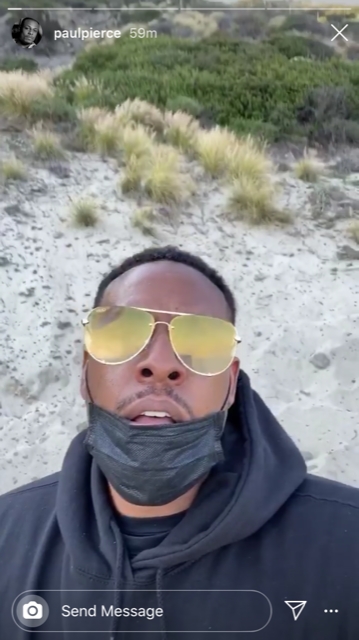 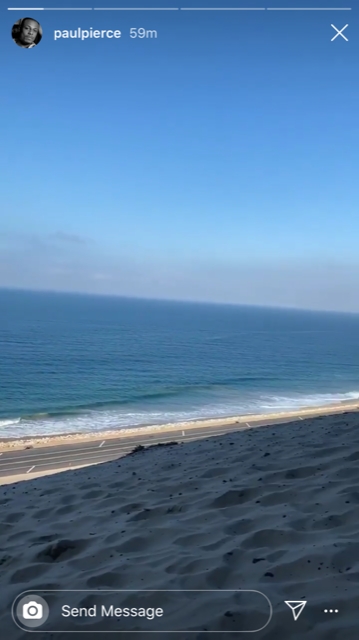 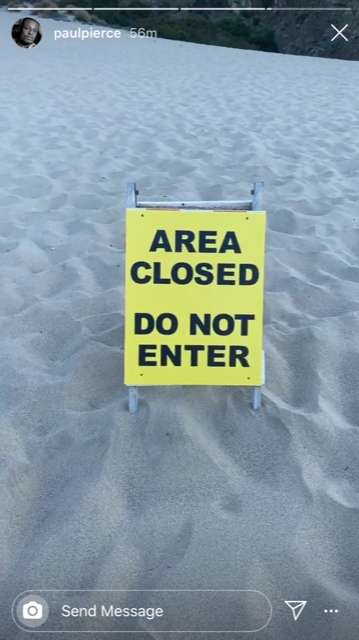 He panned to a sign that explicitly told him not to be there, but he continued, full tilt. The video cut out before he made it and I was a little bit worried until he recently resurfaced:

He’s still breathless, so he could have also run to this beach, but he assures us that throughout all this you have got to find your peace. Is your peace, like Pierce’s, found beside an ocean that is currently closed? Then I’m sorry but you’ve gotta find it elsewhere. Paul Pierce is gonna get arrested!