Hello! Are we still here? We are! Do we want to be? Not really. A big reveal in week seven of NBA Self-Isolation and our own more rudimentary version is that personal forms of escape are on the rise.

For some, this is exercise and physical betterment, for others, building incredibly intricate models of fictitious universes or pretending to go on vacation. Players are testing the boundaries of their bodies and hobbies, seeking out small rushes in their daily routines meant to provoke themselves or, in one specific case, Dwyane Wade. Let’s see who pulls off a jailbreak of the mind, shall we? 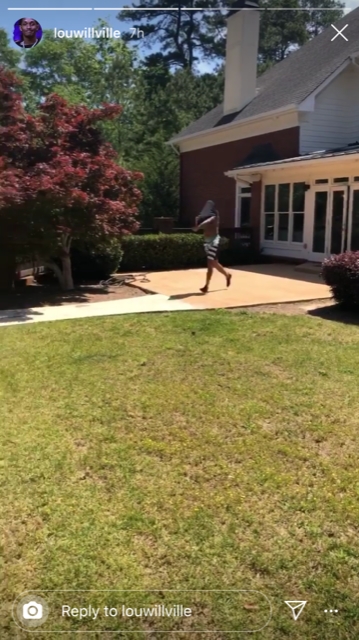 Sweet Lou has a story in three parts (well, in truth it was one fluid video but these are the relevant stills) for all of us struggling through this seventh week in self-ISO, contending with dwindling energy levels yet sleeping more than ever before!

First, escape from routine! Williams bursts out of his home into his backyard, already in the process of yanking his shirt off as he goes. 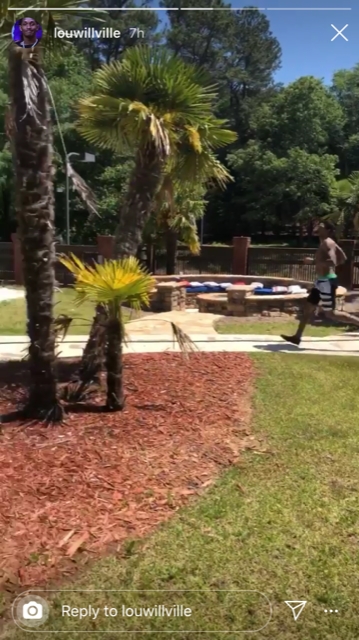 Then, gleeful, he goes sprinting full tilt toward something in the distance. 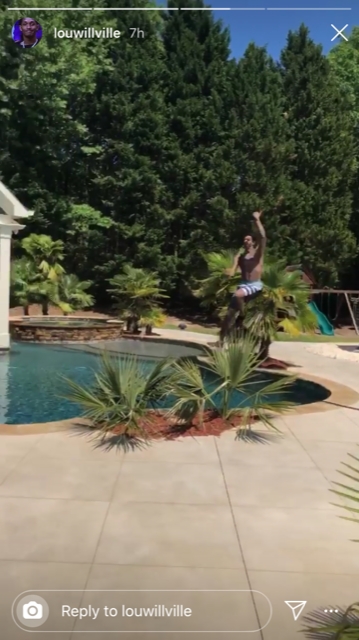 A pool! His pool! Mid-air, Williams holds his nose against the plunge and gives a quick thumbs-up to the viewer, before he goes hurtling under the water.

Rating: A lesson to symbolically bust loose when you need to, but do it within the advisable framework of public health and safety.

Scott, not one to shy away from, well, anything, has been laying lowish these past weeks. But thankfully there was something to stir up his isolation this week — his teammate, Tobias Harris. Harris tweeted something of an inspirational message about harnessing the direction of your life through the power of positive thought and Scott, told him quite positively, what to do next. It was all just some friendly razzing between friends though because Scott shared Harris’s message on its own a little later.

Rating: Let us never forget to razz our friends and loved ones! For even when times are bleakest a good razzing will unite us. Razz the economy, razz leadership, razz, razz against the dying of the light.

How we be lookin at y’all 😂

Mitchell’s quar has been lifted for a little while now but it seems his spirits are soaring, too. First, wanting to get in on the trickshot from home trend many players are trying, Mitchell engaged in some backward shooting. 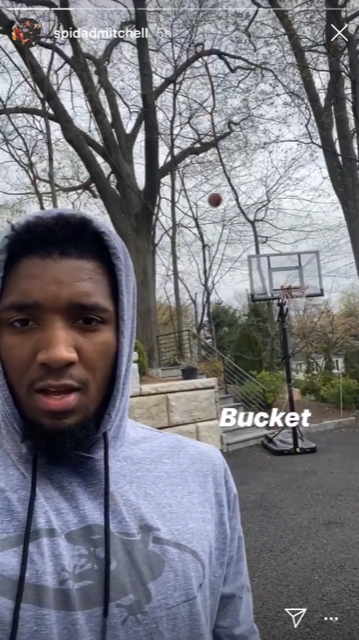 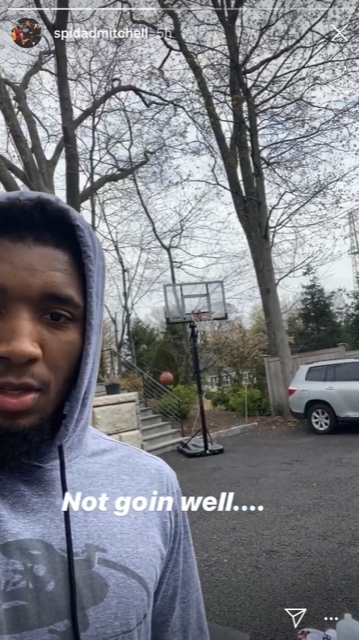 He had about, five tries? His delighted face falling anew with every shot that didn’t. Don’t worry, he made one in the end. Then, even though every single day is Sunday now, sure, Mitchell shared this cozy scene on this week’s actual Sunday showing that it is up to us to maintain traditions.

Rating: Be the wind beneath your own wings. 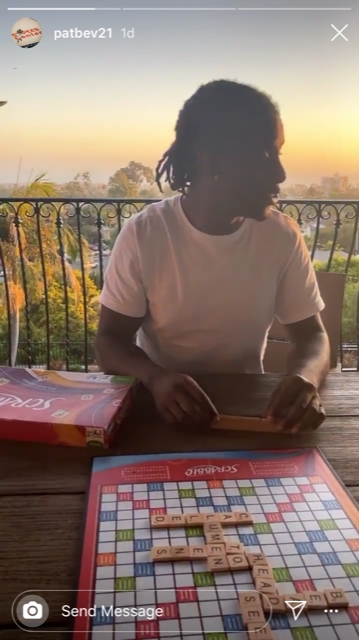 Bev and the boys played a round of Scrabble at dusk, going for triple word scores in the fading, languid light of an L.A. sunset like an all-inclusive resort drink abandoned and melting down at the side of a pool.

Rating: ‘Lumen’! I’ve never in my life thought of that one. Yoink. 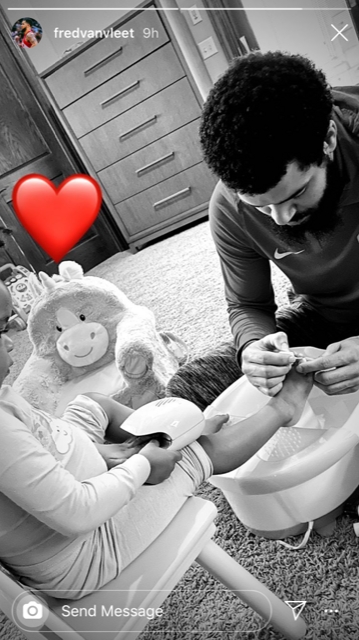 It is hard to be a precious asset on a team full of literally priceless artefacts of the heart, but the Raptor’s Fred VanVleet is just that. VanVleet has spent his mostly private time in ISO with his family, perfecting the games of “I’m a scary lion” or “I’m a scary bear” with his two young kids. He’s branching out this week, giving his daughter a professional (professional basketball) pedicure, complete with mini UV lamp.

Rating: Had you cried yet today? It was time. 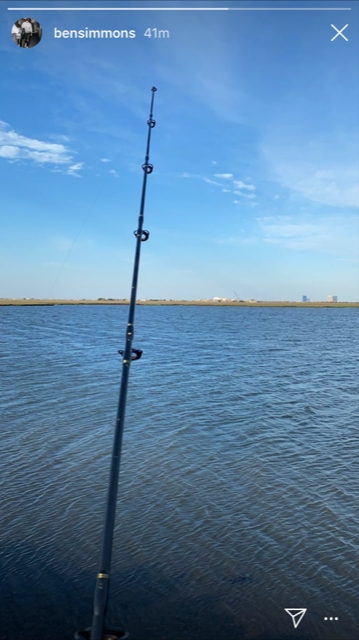 Simmons hauled out the ol’ rod and maybe hauled out some fish from this picturesque small lake or large pond. He didn’t share any catches so I’m guessing no nibbles, but still, doesn’t this look nice?

Rating: Be your own bait.

I feared we hadn’t heard from this rangy deer in ISO and lo, here comes Ilyasova very wholesomely exploring some local woods with a child on his shoulder, something right out of a Turkish fable where all seems lost until a large and benevolent figure in sweatpants comes to rescue you so long as you keep the faith and respect the natural world.

Rating: The kid needs to watch for low and high canopy branches, though.

Not so scary Terry! I’ve used this line already, I think? It doesn’t matter. Everything is as fluid now as this sunlight cascading down onto Rozier and the little tiny puppy he loves, nestled safely in his arms.

Rating: Honestly I have never seen this guy so happy and he is giving us good reason to rescind on a nickname that perhaps never even fit his true, secret heart! 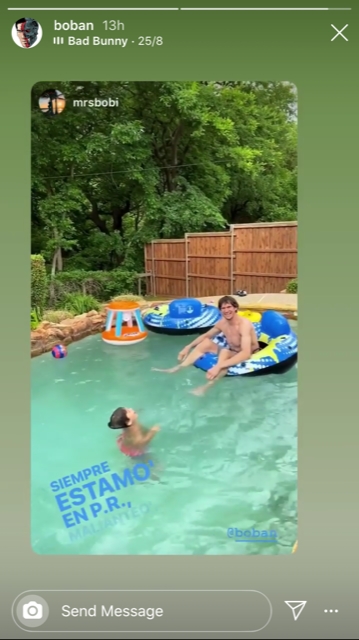 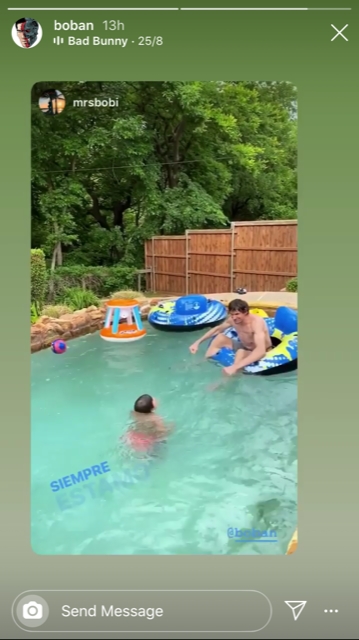 Boby got on the world’s largest inflatable pool innertube and splashed around for an afternoon while Bad Bunny played in the background. Flexing and flopping in the water.

Here are Kuzma and Snoh, pulling up and imploring you to get in loser, we’re going on… safari?

Rating: Kuzma and a little husky puppy are not the pairing we knew a pandemic would give us but it’s the duo we needed plus, how nice is it to no longer have the sneaking, upsetting suspicion that Kuz was very lonely on the Lakers roster!

As we’ve been seeing, Gordan has leaned very deeply into exploring new, creative pursuits in self-ISO. First there was painting, then artistic photography in the swamp at sunset and new modes of dress, now, he is exploring the traditional technique of the diss track. This one was aimed at Dwyane Wade’s questionable Dunk Content judging and opened with a bottle of Wade’s own D Wade Cellars wine. It feels fine if you think of it more as something Gordon had been meaning to get around to doing and less that way if it was something he’s been stewing on since February.

It ain’t that deep tho lol 😂😭 im just having fun expressing myself. Hope everyone is staying safe during these chaotic times. I SEE YOU YOUNG OG the wine was a 10/10. @dwadecellars Thanks legend… ALBUM ON THE WAY #wine

Oh phew, he was having fun.

Rating: D Wade wine, a perfect pairing for all of life’s dishes, even revenge. 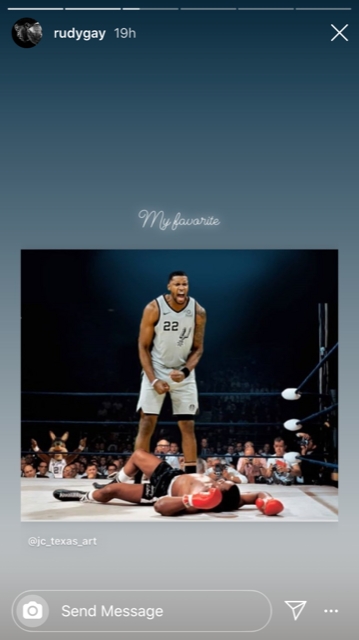 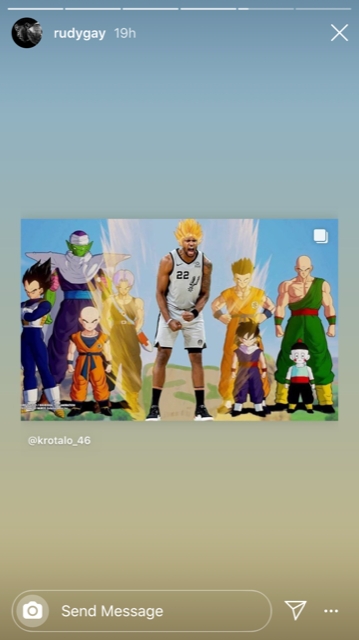 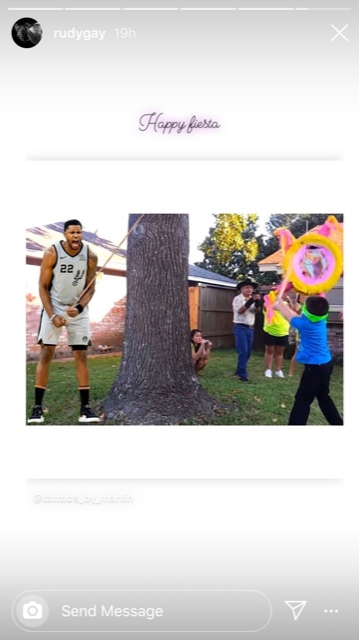 A trend picked up with Rudy Gay in the literal middle of it, a picture of him screaming on court and photoshopped into various scenes. No, he didn’t really “do” anything but it is nice to picture his reaction to each one.

Rating: He said the iconic boxing photo was his fav but I think it’s really ‘Happy Fiesta’. 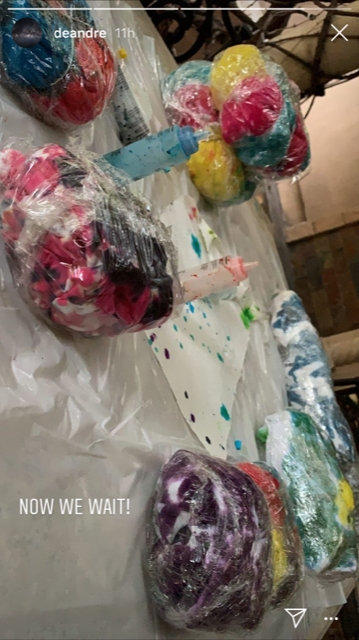 If there’s anyone who was going to get into tie-dye in lockdown it was going to be Jordan. Here’s hoping he gets so into this trend that he soon runs out of things in his home to tie-dye and sneaks, safely, into the Nets practice facility to clandestinely gather up his teammates jerseys to take home and go to tie-dye town on. It’s just good to see someone finally willing to step into Bill Walton’s shoes as the NBA’s leading tie-dye loving 7-footer.

Rating: But of course the Nets, the NBA team most likely to get right into tie-die of their own volition down the road, are super into it upon return to play. Looks like we have a new Association Edition uniform on our hands! 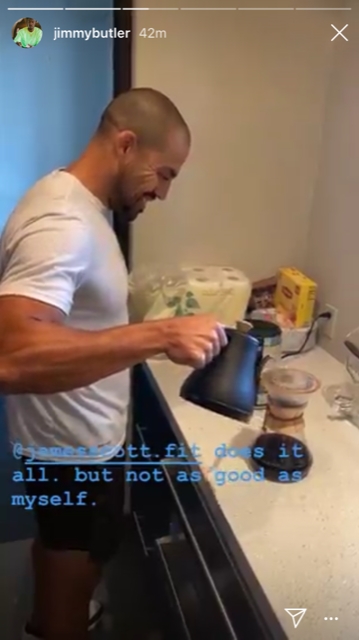 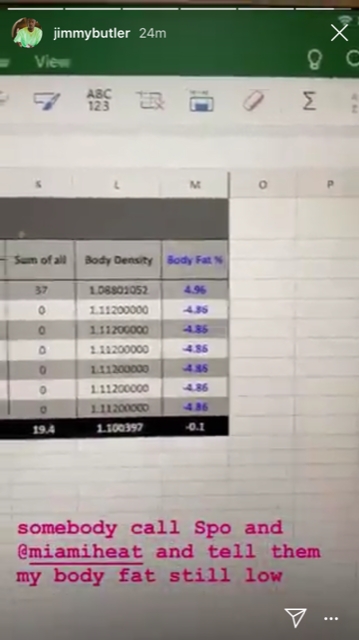 Good news, Jimmy Butler’s mental and emotional state continues to hold up well in isolation. You can tell by decoding the subtle hints he gives such as harassing his friends who are doing nice things for him and fixating on Excel spreadsheets he’s meticulously keeping up that track his body fat.

Rating: The Miami system at work. 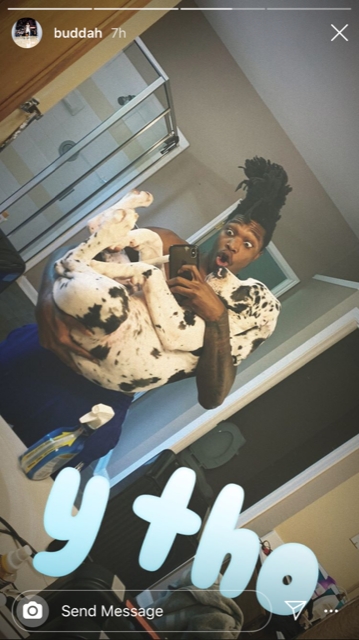 For context, Lonnie Walker is a pretty big guy! I’ve been lucky enough to stand in front of him talking and he has a huge presence as much as frame. His hair is taller than people of a more diminutive stature, etc. When Walker got his great dane puppy, Bishop, in January, the little guy was as big as one of Walker’s shoes, now he’s about as big as half of Walker’s body and still, technically, a puppy.

Also, a bonus from Walker, we now know that he has a photo of himself, Gregg Popovich and Bruce Brown in heart-shaped frame in his house. 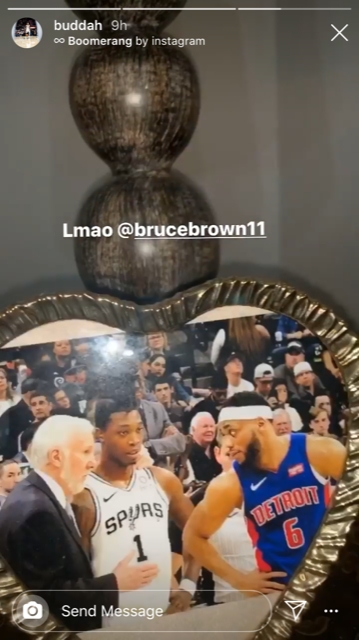 Rating: Get you a bundle of joy that doubles as a free weight. 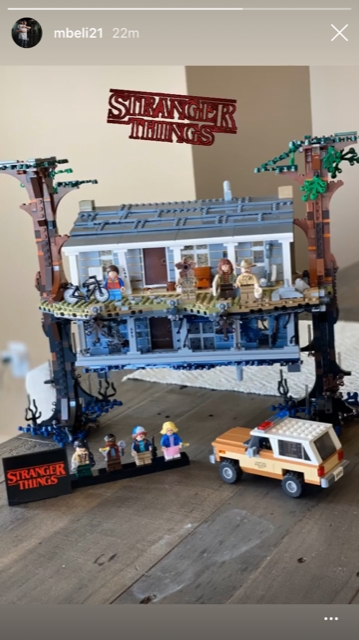 Belinelli’s been heavy into challenges! First, cinnamon, now, Lego. He did a full Jurassic Park set up a couple weeks back and has since done up a Stranger Things situation. Would love to know if he keeps these on shelves in a dedicated Lego room or reuses pieces to do some off-roading in his builds.

Rating: Lego is just a 3D puzzle so don’t be knocking on Beli when you or people you know are paying triple the list price on a 1000 piece puzzle of a windmill. 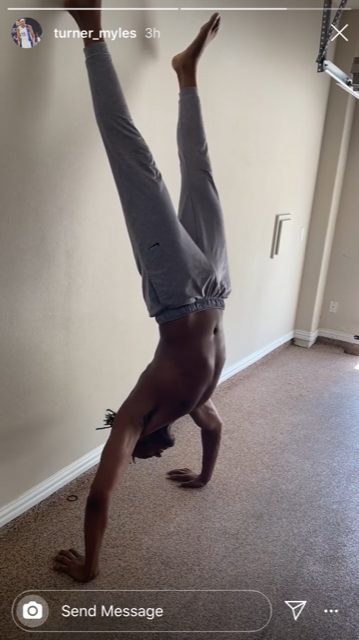 Just your weekly reminder that Myles Turner is going to come out of this with core strength that makes the rest of us look like rapidly collapsing solar systems. Crumpling not in real time, but at light speed.

Rating: He even said next week he’d try this without the wall. 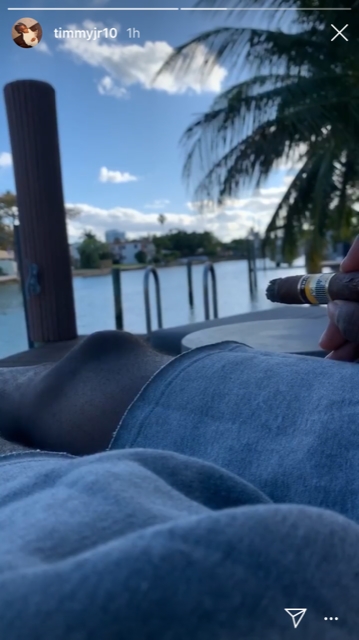 Ah yes, another day in the week in the month in the life of being Tim Hardaway Jr. Lying on his back dock with a stogie, patiently awaiting the return of his manatee pals. [Editor’s Note: That’s a very nice Cuban cigar. Get you a cigar plug like Timmy has.]

Rating: If patience is a virtue then Hardaway Jr. makes waiting a fine art. 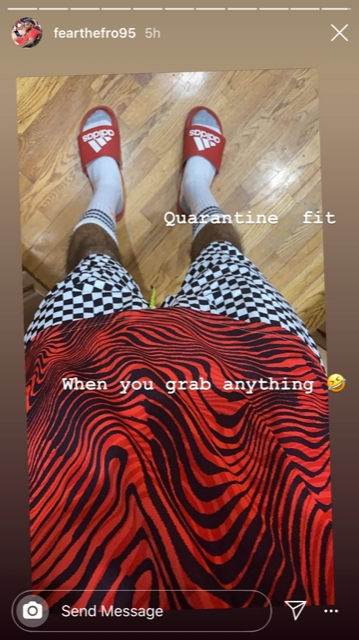 Bembry with the number one rule of dressing for the self-ISO you want.

Rating: In this case pulling a look off just involves leaving one room for another so congratulations, you did it. You’re doing it. 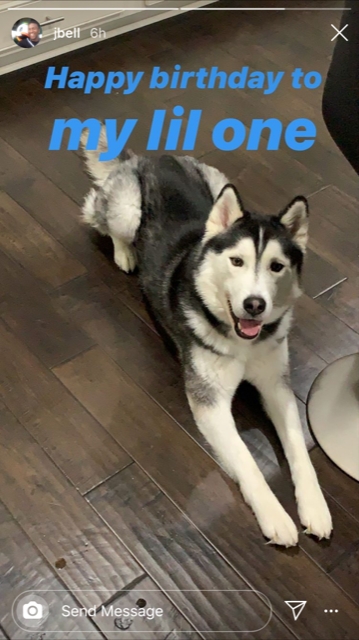 Uh sorry, Bell wishing his dog a happy birthday and referring to it as “my lil one” is what’s going to break your heart today, even if you were holding out for something else.

Rating: Don’t worry, there’ll be something tomorrow that equally shatters you! 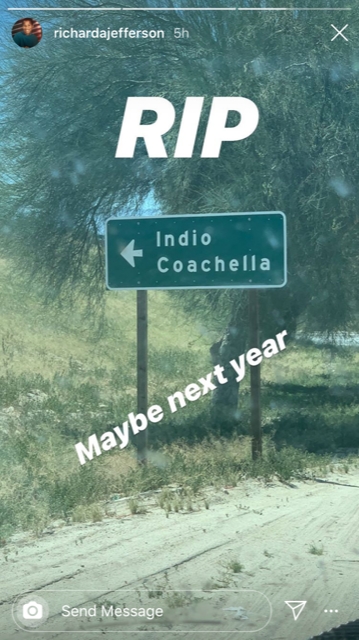 Some people are mourning the things that have been lost due to the pandemic, the economy, a sense of trust in government, things like that. But Richard Jefferson took a detour this week to say farewell to his heart’s purest joy, Coachella?

Rating: I am going to miss all the fake Coachella lineups though. 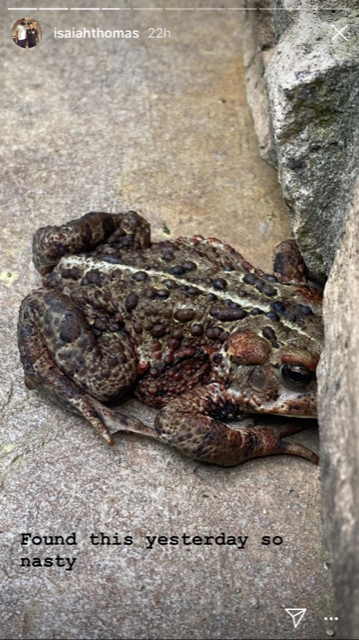 Thomas took a walk and got scared of a toad that seems more afraid of him, then had the gall to call the little, sort of ashamed looking guy “nasty”. 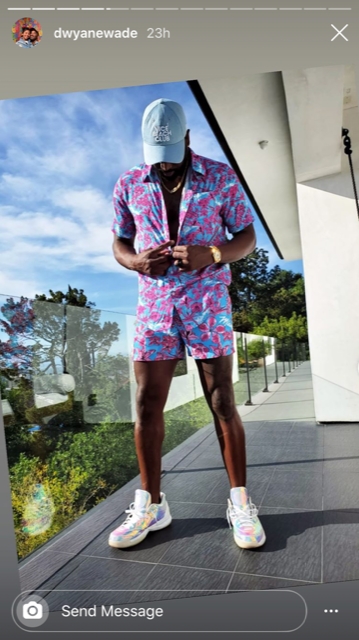 We go live to Dwyane Wade to catch his real-time reaction to Aaron Gordon’s scathing dis track and, oh, here’s Wade and he appears to have his mind on other things, namely dressing for the vacation he wishes he was going on. Wade, can we get a sense of your feelings on the claims Gordon made about you, while really enjoying your wine? 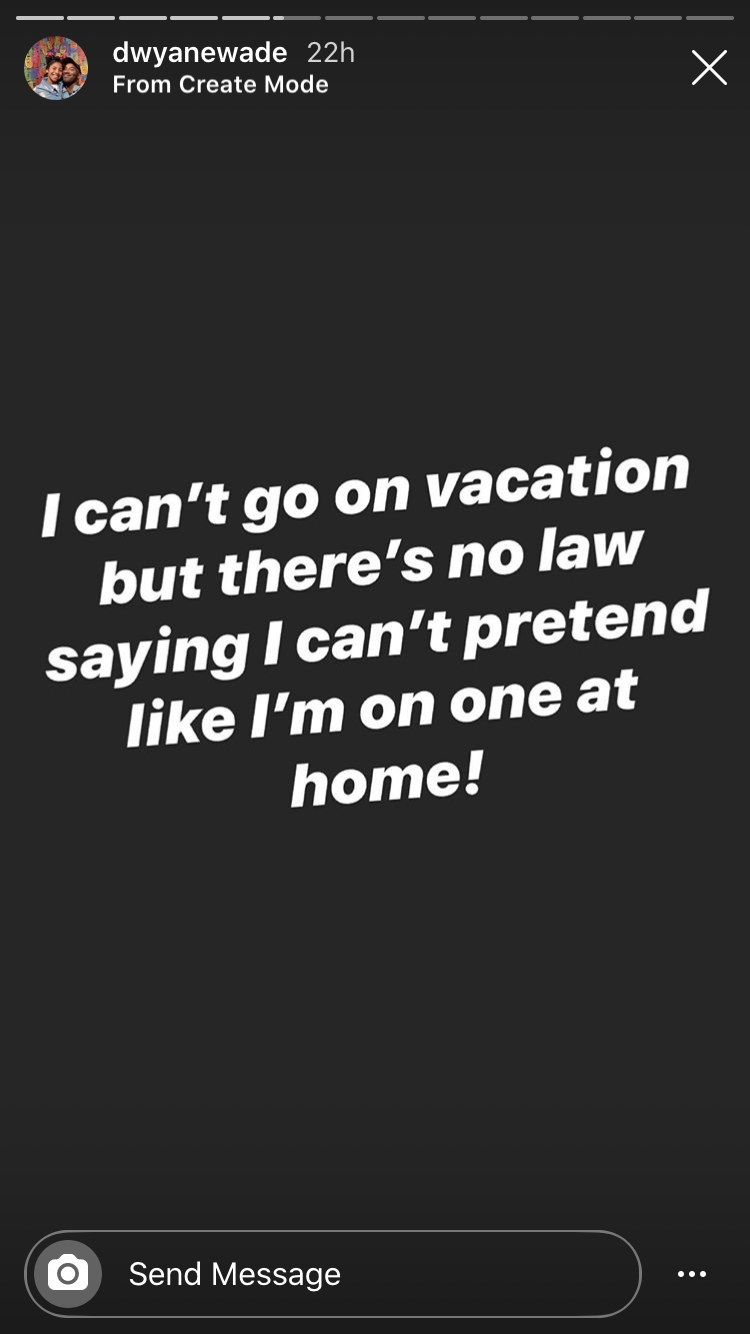 You’re absolutely right, there is no law like that.

Bad and troubling news, Paul Pierce had been quiet this week. Did he get arrested breaking into closed beaches? Will Paul’s isolation jailbreak be from literal jail? Did he hurt himself running across the hot sands of freedom? It was starting to get tense but then, 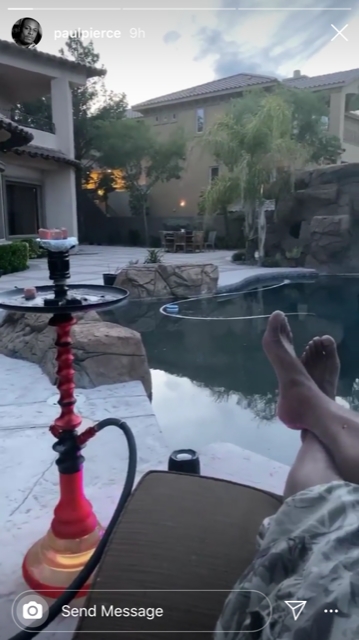 Pierce showed up poolside with a towering hookah to let us know he is, for now, taking a breather from tempting fate. We love the beach too, Paul, but they have been there for literal eons and will continue to be once this is all behind us! The metaphor for time is sand!