NBA Summer Vacation Watch: We Have Waterfalls And We’ll Chase Them

Welcome back, my brave summer lovers. I say brave because by now you’ve no doubt been inundated with the trappings of fall wherever you turn. Cozy sweaters, pumpkin spice anything, insistence from the people you trust that they can feel some kind of crisp hint in the air — it’s seasonal treachery and it edges in closer every year. Summer goes to September 22, people, and NBA Summer Vacation Watch goes until the trips stop. We all know the saying, if you’ve got to show up to training camp alongside a bossy man who starred in Space Jam 2, you might as well do it with a solid tan.

The vacations might be winding down but there’s a solid collection for you here this week that included waterfalls, multiple outfit changes, plus a wedding.

A rare vacation sharer, Jaylen Brown went to a very luxe tropical destination and brought his basketball with him. Seems like he mostly loafed around the resort, smoked a cigar, but left looking happy and relaxed. This is an all-inclusive vacation safe space, by the way. If you or Jaylen want to go to one place for a week or a few days and make staking out the same beach lounger every day the main event, more power to him and to you.

Jaylen then went on a different kind of trip. JK this definitely looks like some sort of brand activation but I see some palm fronds, I see a relaxed looking Brown, I see sunglasses, and I see a magic mushroom the size of a small child, so.

Rating: These basketballs really do have it good.

Bit of a late break from Pascal but the guy had to undergo surgery and preliminary rehab, at least enough that he could stroll around the grounds of what looks like another tropical resort to get these ‘fit pics off.

Rating: Is Pascal, like Pablo once was, in his blue period? All I know is I’m zoning out like I’m looking at The Old Guitarist, but feeling much less depressed. 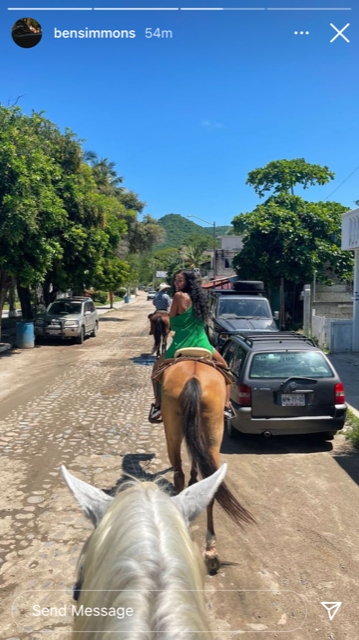 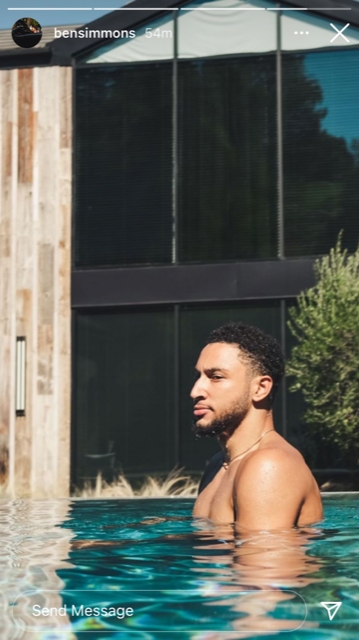 Speaking of feeling much less depressed, or not depressed and probably never was at all, here’s Ben Simmons on horseback as well as 3/4 bodily submerged in some chill aquamarine waters, looking thoughtful, but certainly not mournful.

Rating: Does Daryl Morey take vacations? Unknown. Will they ever be covered here? Never.

As if it was at all surprising, Klay continues to have the offseason only Klay is capable of. This week, he attended a Giants game dressed as what I can only describe as a casual detective with Bay legend, E-40. Remember who told you bucket hats were big this summer? Me, but probably through the conduit of Klay.

Rating: A casual detective that respects the weather.

It was Dame’s Time to tie the knot with longtime partner, Kay’La Lillard (née Hanson). The two got married over the first weekend of September and the photos Dame shared were pretty cinematic, little bit like a music video. That is, of course, until he posed with his mom and broke his composure, which is the talent of mom’s everywhere.

Rating: I wonder if Dame Time makes the blur of a wedding go slower?

Nurk alert! The Bosnian Beast himself attended teammate Damian Lillard’s nuptials, which hopefully puts to rest any lingering suspicions about where Nurkic wanted to go, and whether or not that was still Portland. You only wear sunglasses inside a wedding with the people you love.

Rating: Nice of Nurkic to pose for a pic with his great fan, Jake Layman.

CJ was, of course, also at Dame’s wedding, and through CJ’s photos we can see that Dame dropped some bars at his reception, that CJ danced to them, and that Draymond Green was there too.

Rating: If you weren’t sure of CJ’s commitment to friendship and joy please note that he had an outfit change! He was all in. 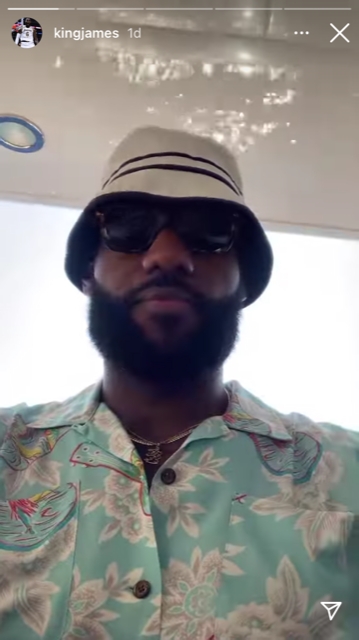 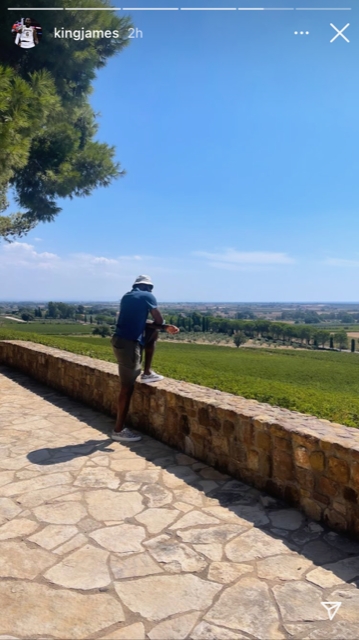 James does tend to take a late-summer vacation, but he also tends to take, like, a bit more of a dramatic one? A little louder than this? This summer he and his family took a low key trip to cruise around Corsica and then disembark so James could stare solemnly out over the ancient vines.

Rating: If you’re worried about coming across as too sombre for the season remember, just toss a bucket hat on. 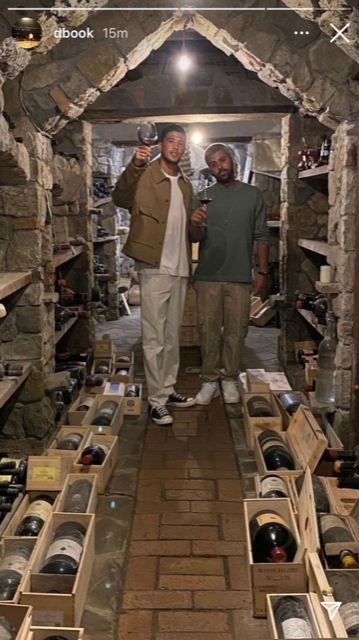 Booker was also in Italy this week, sort of in and around the Amalfi Coast judging by the calibre of pastel building built into cliff faces and umbrella captured in his gf’s, Kendall Jenner, post. Book went down into some wine catacombs, with some really dusty bottles strewn about, dressed appropriately as Indiana Jones.

Rating: Some good height in those cellars, ancient Amalfitani were hoopin’. 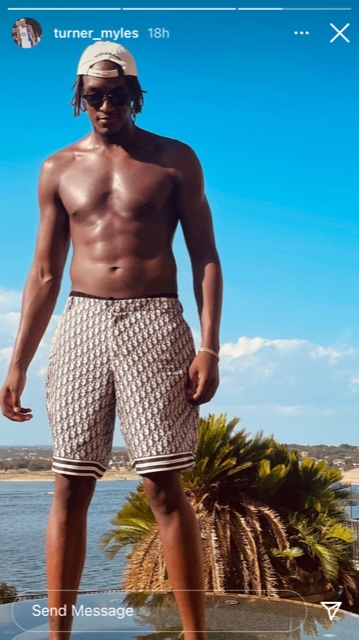 Turner is back for a fourth appearance this summer, this time somewhere tropical, chilling at the edge of an infinity pool. Note that these visits are not just in the same places, but completely different destinations each time. It’s enough to inspire me to write a new twist on the old classic, called ‘I Got Friends In Vacation Places’.

Rating: Blame it all on my socks/I showed up in crocs/And improved this trip a great deal 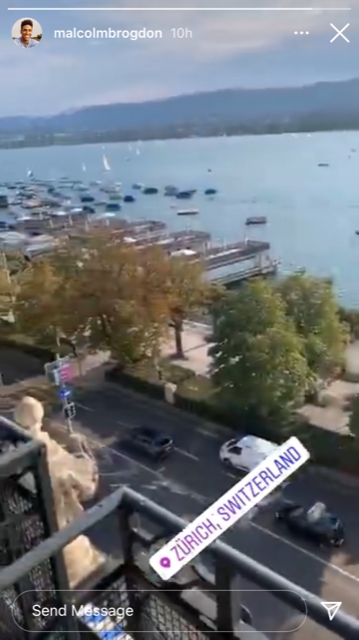 Sorry so blurry but much like the Patterson-Gimlin film this is the only evidence on record of Brogdon having a nice time this summer, so we’ll accept it as truth. Brogdon was in Zurich, taking in Lake Zurich from his balcony, before (I assume) he went to open several off-shore accounts and get himself tied up in a high speed chase through the Alps.

Rating: Love a daring life of espionage and intrigue for him. 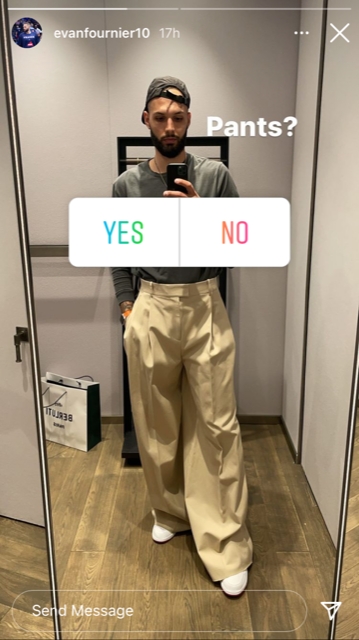 Remember what I was saying before about summer being a good chance to try out new looks? Evan is giving it a go here but approaching it all wrong, because asking about pants in an IG poll is the same as having the pants wear you.

Rating: “But what does this have to do with summer, Katie?” The legions of dedicated fans of NBA SVW out there ask plaintively. “Everything,” I reply, and/or, “it’s the dog days of the summer vacation seasons, and every trip, even a trip to the fitting room, counts.”

The Bouch is loose in Montego Bay, Jamaica, and having a chillers time of it. He took a boat ride, wore a bucket hat, and maintained his signature look of “expressly unconcerned but here to handle it”. 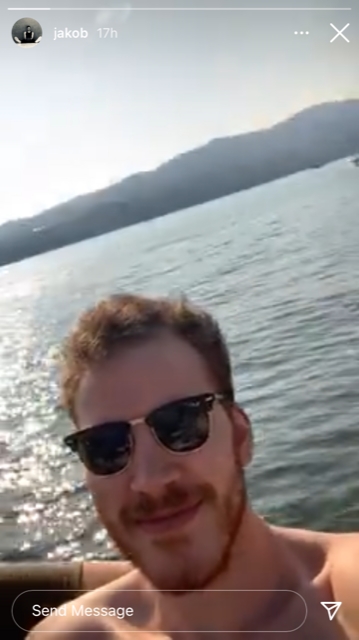 Another blurry “trust me it’s a vacation” photo this week but what can I say, I’m determined to get you the goods in these last days of the season. Poeltl was on a boat with friends wearing appropriate eyewear to protect himself from ricocheting UV rays on water, but not much else.

Rating: Putting forth a suggestion to change Jakob’s nickname from The Austrian Hammer to The Austrian Tanner, thanks. 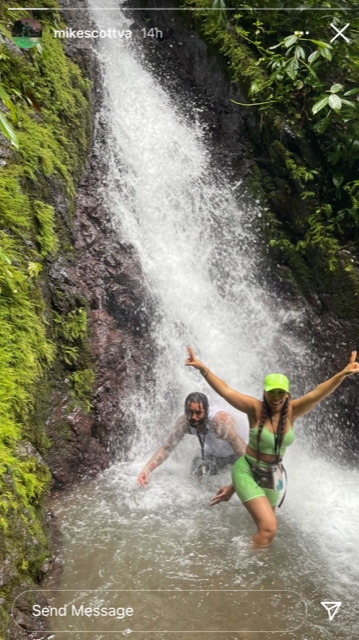 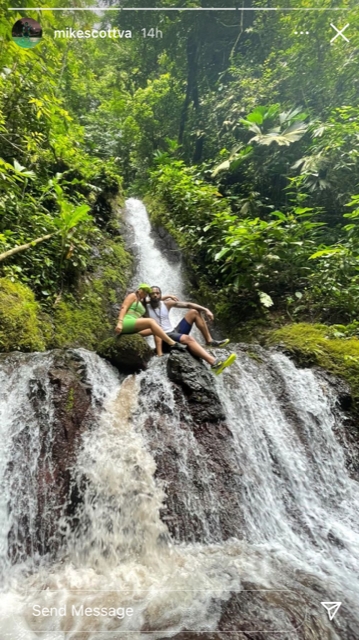 If you were thinking this whole thing was getting pretty long going without an appearance of one of its former SVW MVPs, well you and me both. Cast those fears aside like a prematurely layered cardigan, however, because he’s Mike Scott when we most need him and he’s hanging out in and around a waterfall.

Rating: Though I’m loathe to admit it’s coming to an end, I can rest easier knowing Mike Scott was here. Like a ghost of summers past showing you where it all went right. 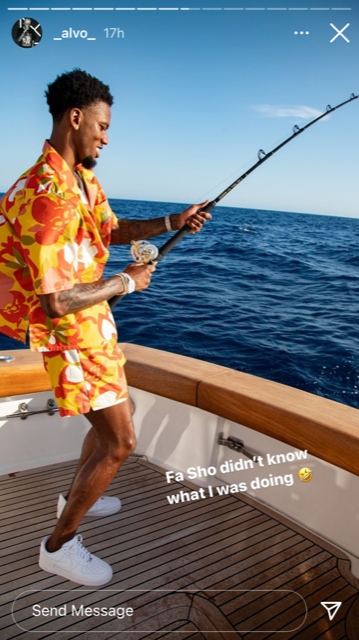 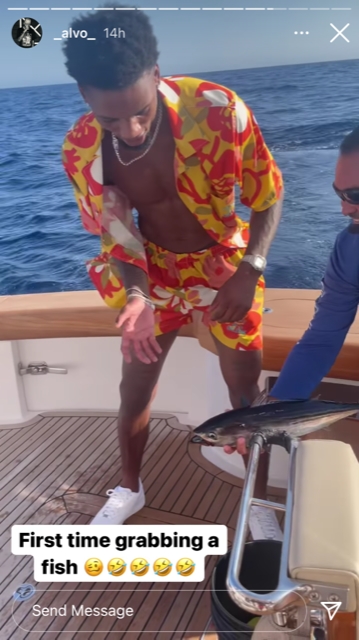 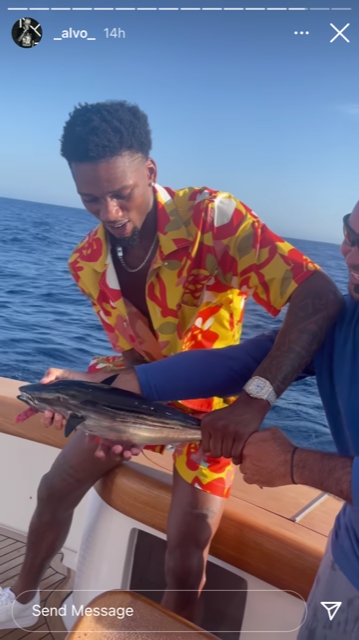 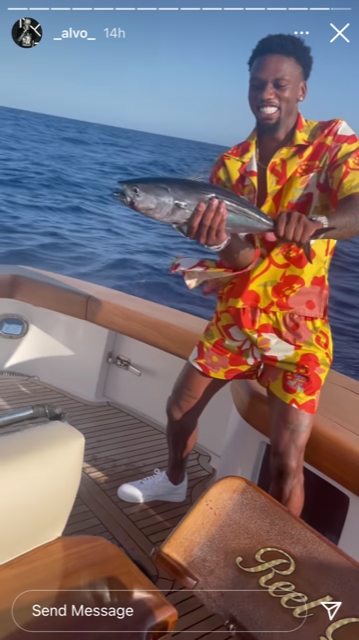 Alfonzo fished! More than that, he faced what seems a legit fear, holding a thrashing and very strong looking fish. He did it all in a matched set of a bold, distinctly tropical print, top fluttering in the sea breeze. When it came time to pose, or maybe this was before the fish, he completed the look with a shirt not covered in potential fish slime and just like, the most excited smile.

Rating: The Lakers, in their obsession with assembling an Old Beach of their own, really let this one get away. 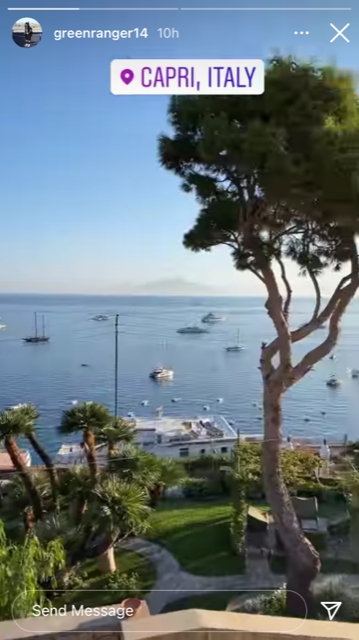 Danny is here to redeem himself after that last, traumatic, I’m in Italy but does anyone know where I might find a gym pic. He decided to, thankfully, enjoy himself on his own literal honeymoon.

Rating: Lord knows, there could be some free weights just out of frame there, one of those big boxes for jumping up on, any manner of vacation treachery. 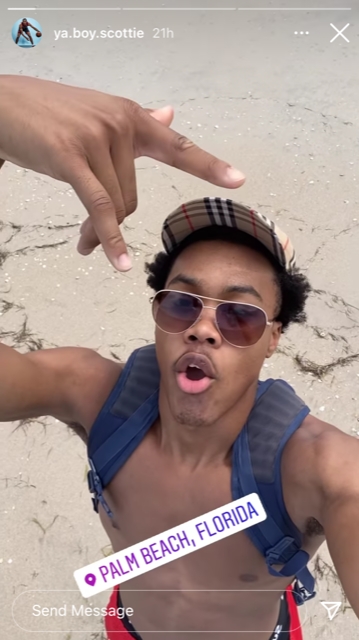 Rookie Scottie Barnes took to the beaches of his hometown earlier this week before he ended it on a plane to Toronto. Here’s hoping he sucked in all that sun like a lizard because, my sweet dude, there are sickos in this city already clamouring for the colder months like they’re clamouring for the Toronto Raptors, who are finally back.

Rating: I DON’T want to talk about winter coats I just want to know that somebody’s already on getting him the biggest one. 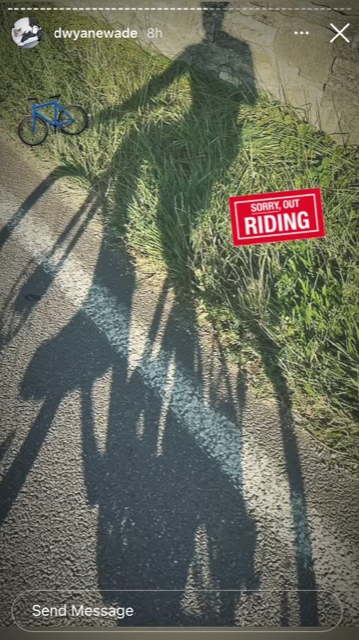 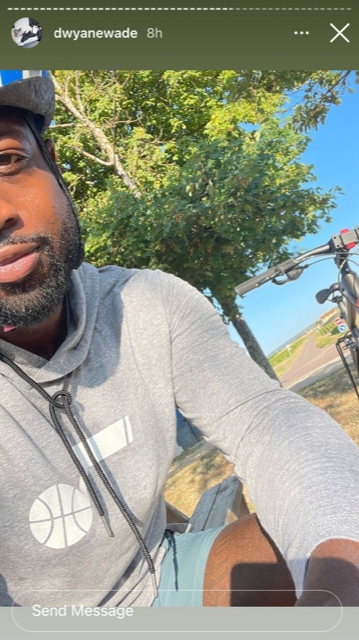 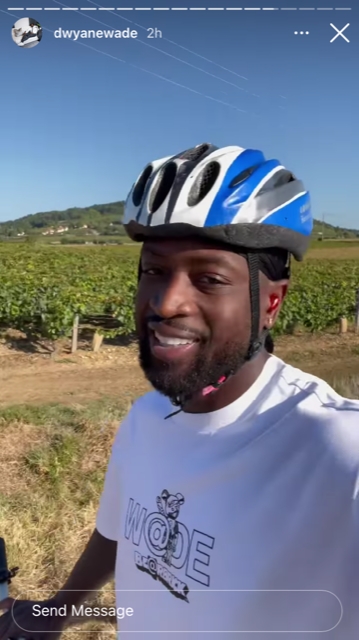 Ah, like a rooster’s cacophonous call to the night’s end, so too has Dwyane Wade’s weeks long vacation come to a close. He rounded this summer out in France, where he spent a great deal of time on a bicycle, zipping and wobbling from one vineyard to another, testing wine and tenderly holding small grapes. Did he get fits off? He did. Did he wear a helmet? Most of the time. Is the way of Wade (spending a solid chunk of summer sipping rosé and going down big slides into the ocean) intact? It is.