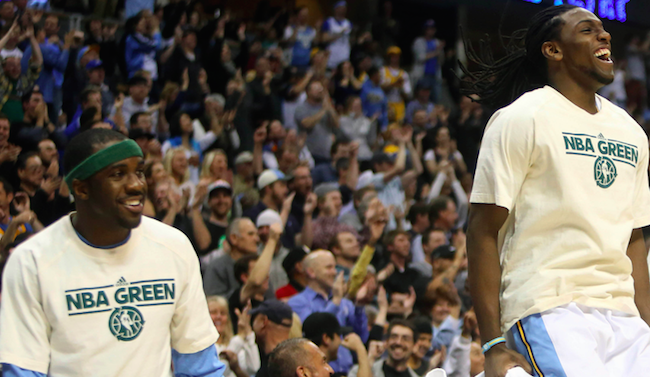 The Denver Nuggets are in shambles, but that doesn’t mean they’re cleaning house – at least not completely. Grantland’s Zach Lowe reports that though every player on its roster save for rookie Jusuf Nurkic has been made available before Thursday’s trade deadline, it would take “Godfather” type offers for Denver to part with Ty Lawson or Kenneth Faried.

The more interesting questions surround Ty Lawson and Kenneth Faried. Denver isn’t shopping those guys, but Jusuf Nurkic is the only true untouchable on the roster, per several league sources who have dealt with the Nuggets. The sense around the league is that you could land Lawson or Faried with a Godfather offer. They are gettable.

The “offer you can’t refuse” distinction is extremely important here. Though the Nuggets have wildly underperformed compared to optimistic preseason expectations this season, there’s certainly reason to keep this team’s central parts around. Lawson and Faried aren’t true All-Stars, but each capable of being a quality starter on a playoff team – at the very least.

And though the years and dollars left on their recently signed extensions – two years and $25.5 million for Lawson, four years and $50 million for Faried – seem expensive for the key cogs of a lottery team, those numbers won’t prohibit Denver from being an active summer suitor as long as it unloads other players. Salaries of approximately $13 million are appropriate for a good team’s second or third best guys, and Lawson and Faried are capable of occupying those roles – especially the former.

That other outlets have ran with Lowe’s intel and suggested both players are being actively shopped is flat-out misleading. Think of it this way: How many players in basketball couldn’t be had for a Godfather trade proposal? You can count that number on less than two full hands.

Lawson and Faried can be had for a price similar to one so many other lower-tier stars could. That news shouldn’t create headlines – a team making players of that caliber totally unavailable just wouldn’t be prudent, and is wholly unrealistic, too. The only NBA players who won’t be traded are transcendent talents and youngsters with considerable upside playing on rookie contracts, and that reality is no secret.

Players know it. Coaches know it. Front offices know it. And fans should, too. Reporters irresponsibly implying otherwise seems like poor journalistic form.

Either way, expect names like Lawson and Faried – and Wilson Chandler, Arron Afflalo, etc. – to be ones frequently mentioned as potential trade bait leading up to Thursday’s 3:00 EST cut-off. Just make sure you also don’t expect anything to come of rumors involving Denver’s fleet-footed point guard and high-flying power forward.