The United States Marine Corps is an integral part of the U.S. Armed Forces, and as part of honoring the hardworking members of the Corps, the NBA often works together as a team to help those who serve. Teamwork is more than a core value on and off the court; it’s a way of life. Here are five examples that illustrate how the NBA honors the members of the Marine Corps.

The Charlotte Bobcats teamed up with Wells Fargo to build a new, mortgage-free house for Josh Morgan, a Lance Corporal with the U.S. Marines wounded by an IED.

Anthony Davis rallied his fellow Pelicans to host U.S. Marines for a team practice and lunch at the team’s training facilities as part of the Hoops for Troops initiative, which the NBA uses to honor both the military and the public service of Marines and other members of the Armed Forces.

We’ll let Mashable relay the story of Meyers Leonard and his older brother, Bailey, who joined the Marine Corps in 2008. Bailey and Meyers often had to work together growing up, and Bailey surprised his brother with an impromptu visit you can watch HERE.

Meyers had to grow up without a father, and eventually, he had to learn to live without his big brother as well. In 2008, Bailey joined the United States Marine Corps. “It was such a shock to me,” says Meyers, “I went to my room and cried. I’d never not had my brother.”

In early March, Bailey decided to surprise his brother, who he hadn’t seen play for more than two years. 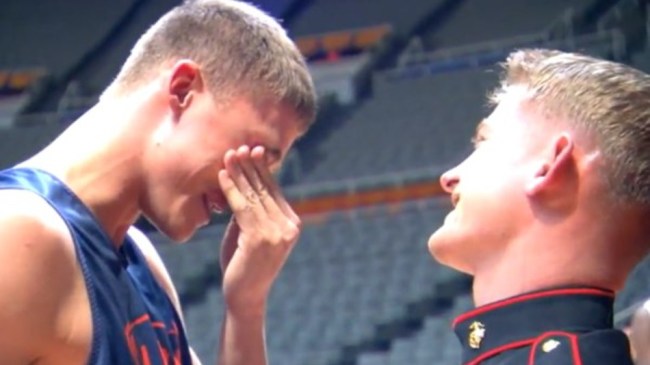 John Paxson, the Vice President of Basketball Operations for the Chicago Bulls, had a star basketball standout as a son in Ryan Paxson a guard for Olivet Nazarene University, who made the nationals in his first two seasons in school. Then, Ryan elected to join the United States Marine Corps. As K.C. Johnson of the Chicago Sun-Times relays, his father couldn’t be prouder of his decision:

“My first reaction was pride,” John says. “I didn’t see it coming. To me, it said a lot about my son and what he valued. He said to us he understood he grew up in a nice way. He saw a lot of entitlement around him from kids his own age. He didn’t want to be that kid.

As we can see, it’s all about working together for the good of all. Whether it’s as a team, as a family, or a unit, teamwork brings out the best in all of us. On or off the court, it’s what makes a team, or a country, great.