How Your ’90s Nostalgia Is Being Used To Sell You Stuff 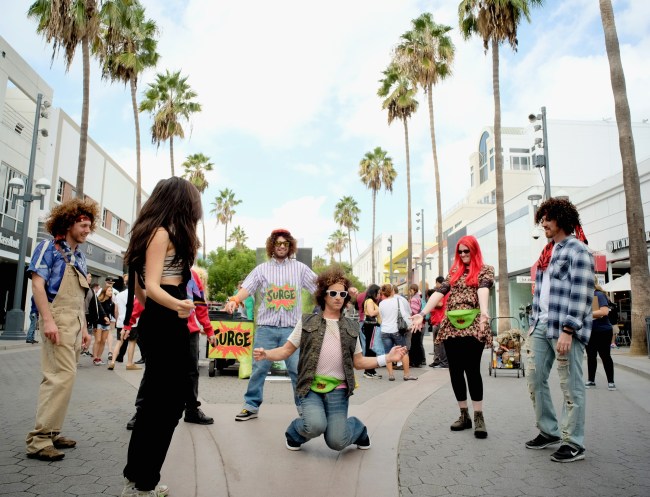 Ever since a bunch of soda lovers somehow successfully petitioned Coca-Cola to reinstate Surge, the internet has been abuzz wondering which sugary beverages from the ’90s might be next to hit shelves. The roll-out for Surge also spawned some type of weird Pauly Shore cross-promotion, in which the comedian dressed like the frontman of an LMFAO tribute band in the name of one of the most artificial beverages on the planet. It’s a small price to pay for being able to freely dye your urine Surge green and experience the same heart palpitations you knew and loved as a child. It’s also far better than the folks possibly getting duped by Clearly Canadian, who has yet to ship any of their sugar water to the thirsty masses.

’90s nostalgia isn’t just for drinking, of course. A whole boatload of advertisements have cropped up helping to shill everything from car insurance to shoes off the basis that we all deeply miss the decade that brought us scrunchies, Pokemon, and Bill Clinton’s “I Did Not Have Sexual Relations With That Woman” speech.

Here are just a few ways your nostalgia may be working against you for the sake of capitalism:

Ah, yes. That great coming-of-age hit penned by Bob Dylan’s son is now set to a motorcycle insurance commercial. Ignore the punny nature of giving “One Headlight” to a vehicle with just that and bask in the tungsten light illuminating the fact that you’ve just bought the most conformist intangible good known to man all because a song about this world being bullsh*t ignited your “back in the day” receptors.

Return of the Ventilator

Kendrick Lamar lends street cred to one of the uglier nostalgic comebacks out there — a running shoe that debuted in 1990 whose main selling factor was the fact that it was essentially nonfunctional in any type of moisture. The Ventilator has the type of name you’d expect to see at a BBQ grill surplus store advertising add-on parts and features, yet this neon rainbow of arch support has been so thoroughly missed by the ’90s nostalgia crowd that it’s somehow making a bold return.

Crispy M&Ms were actually legit candies that never should’ve been discontinued in the first place. If anything, those almond M&Ms were always a bit excessive and yielded a rather awkward chocolate to nut ratio. Nothing from the ’90s can ever really die, however, and the time between a crispy-less existence and the golden age of this candy delight becoming widely available again spanned 10 whole years and countless social-media campaigns. Hope you’re proud of yourselves, internet.

The dream of an even unhealthier Lucky Charms (with zero cereal pieces and even more marshmallows than Rice Krispie Treat cereal) can only be achieved through nostalgia. Biz Markie’s “Just a Friend” may have dropped in 1989, but the rap ballad about a triflin’ love interest named Blah Blah Blah was surely bumpin’ throughout the greatest decade. Win a box of what’s pretty much a bag of marshmallows and food coloring while going even further into that blast from the past life.

Any other ’90s nostalgia-based schilling you can think of? Share in the comments!