Want To Be An Amazing Chef? These Home Cooks Are Giving Away Every One Of Their Secrets

Cooking skills are hard-won in the kitchen. Honing those skills takes practice, time, experimentation, and even more practice. It’s often a lifetime of learning and the more you cook, the better you’ll get. That’s a hard fact, but it doesn’t necessarily mean that a few tips from the pros can’t help you over the tougher hurdles along the way.

Replicating a delicious meal from your favorite restaurant is probably one of the hardest things to do for beginners, but it can be done. You’ll likely be shocked by the amount of salt (and butter) you’ll need to do it. And when you master that dish, you’ll feel pretty damn good about the food that’s about to go into your belly.

Budding home cook SkiBumSkiBum took to Reddit to ask a simple, yet crucial question, “Chefs of Reddit! What little tips can you give us normal humans to make our meals slightly better?” Below are some of the best answers put forward by the Chefs of Reddit (now there’s a pitch for a new Netflix cooking show!).

Let’s start with those knife skills! Redditor alek_hiddel takes a lesson from Anthony Bourdain on this one:

Anthony Bourdain had a bunch Michelin starred chefs cover this in a episode of no reservations. The biggest take away for me, was to buy a 10lbs bag of potatoes or onions (cheap) and practice your knife work until you are reliably consistent with your cutting/chopping. Pieces of uniform size and shape cook evenly. Irregular pieces are going to give you either uncooked bits, or pieces that are cooked far too much.

Letting your food — especially proteins — rest is a crucial step to a flavorful meal:

Stop cooking a bit before it’s done and let it sit for a few minutes.
It will finish with the stored heat and not be all dry and flavorless when you eat it.

Slipping a little something into the sauce can amp up the flavor:

Worcestershire sauce can be added to pretty much any sauce to improve flavour.

Here’s some good advice for switching up a recipe and making it your own:

If you know how to make a dish pretty well already, consider switching out one of the ingredients with something similar to see how it affects the finished product. Here’s an example most people can use: next time you make mac & cheese out of the box, use plain yogurt instead of milk. It gives it an extra kick that’s really terrific. (I kept working this idea, and now the sweetie pie INSISTS we only use creme fraiche for our boxed mac & cheese.)

And never forget that the best ingredients are fresh, and the best kitchens are clean:

Use fresh vegetables whenever possible and never (never!) use canned mushrooms. Chop meats and vegetables in uniform sizes so they all cook at the same rate. Clean up as you go.

The secret to amazing rice? Cook it in broth. Actually, cook everything in broth:

Anything savory you’d boil in water, boil in chicken stock instead. (unless, God forbid, you’re a vegan. Veggie stock works too though!) Rice, beans, etc. They’re all vastly superior cooked in stock (dilute your stock if you, like me, are broke as f*ck and need it to go along way, tho it costs like 3 bucks at Wal-Mart) (hahaha chef life is the poor life)

There’s also something to be said about keeping it simple if you want to cook like a pro. (Seriously, though, master that mirepoix) 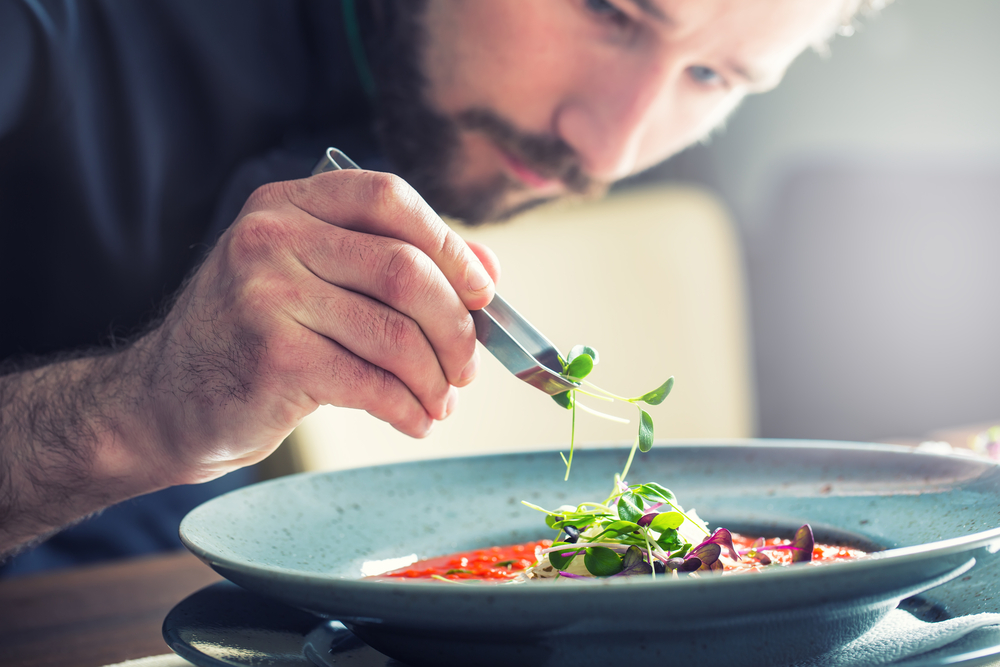 This meditation on spices is a good guide to learning how to identify and use flavors that make your dish shine:

Use f*cking spices, people. They greatly enhance the flavor of your food and many are very, very good for you. Learn what goes well in which food, garlic, rosemary, thyme, cayenne, paprika, basil, parsley, chives, etc. Oh, also, toss that godawful iodized table salt. Either go with sea salt crystals or Pink Himalayan salt that can be ground in a grinder, same with pepper. You can thank me later.

When you get home with your spices, take a little bit and crumble it between your fingers. Put it in the palm of your hand. Smell it. Take a deep whiff. Your nose is just as important as your tongue, sometimes more. Take a tiny bit of it and taste it. This will help you so much in the future. It will help you because you’ll be able go to a restaurant and say to yourself ‘hmm. I taste oregano and thyme in this. I can make this dish!’ It’s also important because some herbs and spices are much stronger than others. Sometimes a mere pinch is too much, other times you can add a whole bunch and it won’t be overpowering. So, once you can identify multiple seasonings via taste and smell, you’ll be able to look at a recipe you find online and say ‘that sounds good, but I’ll bet it would be better with a little less XXX and a pinch of X’.

Once you reach that point, you can tweak recipes to your own taste and improve on them. That’s when you know you’ve mastered it.
That said, it is a constant learning curve. You literally never stop learning.

Finally there’s that tricky and confusing oil situation. Here are some tips for which oils to use and how to use them.

Here’s a handy dandy chart: http://www.goodeatsfanpage.com/collectedinfo/oilsmokepoints.htm Basically when you’re cooking at moderate to high temp you want neutral oil’s that have a high smoke point. This goes for things like sautéing, especially things like stirfry and, deep frying, where you want the oil to not only get to high temperature but also maintain a high temperature. If you’re even considering putting your burner or element on high heat, then you want oil with an extremely high smoke point. When oil smokes it changes the flavor and also burns off volatile compounds that reduce the flavor, so using extra-virgin olive oil just doesn’t make sense when you’re at a moderate to high temperature because a lot of that flavor is going to be lost either to the food itself or to temperature.
Now it should be noted that many times you will be asked to heat the pan until the oil is just smoking, so you’ll reach smoke point, but again you should know what that is. So if you’re cooking at moderate temperature and you’re supposed to use moderate heat and heat until the oil smokes, but you use bacon fat, the fat will start smoking a lot sooner that you really wanted to and the pan will actually not be the correct temperature.