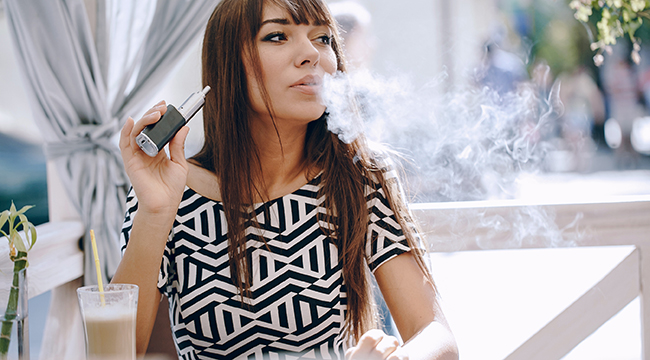 You’d have to be stuck in a bunker, Kimmy Schmidt style, to miss the memo that cigarettes are bad for you. But the jury is still kind of out on whether or not e-cigs and vaping cause the same kind of health problems as cigarettes. We recently learned that vaping damages your immune system much the same way smoking cigarettes does and now there’s more bad news for everyone who loves to light up with a bottle of cinnamon bun flavored juice: new research says e-cig vapor releases cancerous chemicals.

Researchers at the Lawrence Berkeley National Laboratory found two “probable carcinogens” among the 29 chemicals found in vapor. These include propylene glycol, which is an eye and respiratory irritant, and glycerin, an eye, skin, and respiratory irritant. The study claims that heating up propylene glycol and glycerin causes them to decompose and release other toxins such as acrolein and formaldehyde. Yikes!

The author of the study, Berkeley Lab researchers Hugo Destaillats told The Washington Post, “Regular cigarettes are super unhealthy. E-cigarettes are just unhealthy.” While it may be true that e-cigs create fewer emissions and offer an alternative to long-time smokers who struggle to quit, they are still unhealthy. Choosing e-cigs isn’t good for your health, it just seems to be the lesser of two evils.

E-cig research also revealed that the higher the temperature inside the vaporizer’s heating coil, the more chemicals were emitted. So, theoretically, it would be less harmful to use a vaporizer that has two heating coils because neither would reach the same dangerously high temperatures of a single heating coil. Additionally, a drag from a vaporizer was laden with fewer chemicals if it was taken while the e-cig heated up rather than if it was taken while the device was at a steady, constant heat.

Now that we have evidence that e-cigs are bad for your health, these and other vaping regulations should come as no surprise anymore. And while we applaud those who’ve given up cigarettes for a slightly less unhealthy alternative, we should make it clear that it’s unhealthy to the multitudes of kids who are picking up the habit.