Eat This Or That — How To Plan A Thanksgiving Eating Strategy

In case you missed it, Thanksgiving is tomorrow. Which means you should probably start working out your Holiday Eating Strategy ASAP. If you don’t know what, exactly, I mean by a Holiday Eating Strategy, then you’re probably the person who dives right in to the roll basket and is full by the time the gravy boat actually makes its way around the table.

What I’m saying is, prioritize! All those side dishes on the table can be overwhelming. You don’t want to make any decisions you’ll regret 10 minutes down the line, when you’re stuffed to the gills but haven’t even touched Aunt Lucy’s Creamed Corn Pudding (you know the dish).

First Take: Mashed potatoes are a Thanksgiving necessity. Sure, tubers hadn’t made their way to the New World, or even the Old World, by the time the pilgrims of lore landed at Plymouth Rock, but that doesn’t mean you should pass them up at the table in 2015. On the contrary, make sure to take a big, claggy spoonful of the stuff. If you get too full to eat it, you can always turn it into a volcano at the end of the meal.

Second Opinion (Vince Mancini): It’s hard to talk about Thanksgiving without someone bringing up mashed potatoes. I know, it’s traditional, right up there with an apple pie when it comes to unimpeachable comfort foods. Thus, I know this is borderline blasphemous, and I don’t want to pigeonhole myself as the guy with strong opinions about potato products (GUILTY). But I feel compelled to point out that mashed potatoes just aren’t that great.

Look, they aren’t bad, especially if you slather them in gravy, whip them with equal parts butter and potatoes, and/or use a creamier potato variety like Yukon gold as your base. But even done perfectly they lack the textural contrast to eat much of (and why eat if I’m not going to gorge?!). The drawback of the smooth texture is that it sort of reminds you of nursing home food. I have a hard time with anything that looks the same going down as when I puke it up to cut carbs. It’s meant to be a side dish, so… it’s fine. If we’re making both mashed and scalloped potatoes, I’ve got no beef with you. But if you ask me to choose? It’s not even close. Scalloped have all the potato and butter flavor of mashed, plus cheese, chew, and god willing, even a little crunch. If we’re comparing potato dishes, the best thing you can say about mashed is that they’re better than baked or boiled. COME AT ME, BRO.

First Take: It’s pretty rude to serve a Thanksgiving meal without gravy. I think Emily Post wrote something about that, actually. Although gluten-free gravies exist, you should probably just assume that the stuff on the table was thickened with flour and pass on it if you’ve got a sensitivity. Or, you know, if you just don’t like gravy. Traitor.

Second Opinion (Steve Bramucci): Gravy is a sauce and you just can’t have a meal this heavy (and potentially dry) without at least two sauces (gravy + cranberry). This is beyond essential — go to a home where it’s made from real reduced turkey or chicken stock.

First Take: These glutenous balls of heaven are particularly exceptional when they’re still warm and the butter gets all melty inside them. I’m redacting what I said earlier about filling up on bread. Go ahead and give your belly what it wants.

Second Opinion (Ben Esch): Much like Bill Wennington on the 1996 Chicago Bulls, the humble dinner roll is overshadowed by its surrounding cast at Thanksgiving (Michael Jordan is, of course, the turkey, Scottie Pippen is mashed potatoes, Toni Kukoc is stuffing, and Dennis Rodman is marshmallow yams to continue the analogy). But like Bill Wennington, the dinner roll does the dirty work — sopping up gravy, blocking any weird Jello-based side dishes from touching the meat, and serving as a base for sandwiches — that enables his teammates to soar to greatness.

First Take: If you’re accustomed to eating cornbread on Thanksgiving, go right ahead. But it’s tough to compete with a hot, buttered roll.

Second Opinion (Steve Bramucci): Hard disagree. Cornbread, with a little molasses in the batter, is clearly better. This is gospel.

First Take: I’m not going to touch that whole cornbread stuffing versus bread stuffing debate—although, if we’re speaking about authenticity, the pilgrims wouldn’t have had any sort of bread at their first Thanksgiving meal.

That said, stuffing in all its various forms is a necessity that simply can’t be passed up.

Second Opinion (Steve Bramucci): Duh. You gotta have stuffing. Maybe only eat stuffing. Literally stuff yourself with stuffing. Who even cares about the Turkey?

CRANBERRY SAUCE (FROM A CAN)

First Take: What Thanksgiving table would be complete without the gelatinous circles of cranberry sauce, still bearing the rings of the can they came in, arranged neatly on a plate? Custom dictates that you take this, but eating it is actually probably not necessary.

Second Opinion (Jamie Frevele): I have a hard time saying that any specific side dishes are worthy or unworthy of Thanksgiving when everyone’s holiday is essentially tailor-made to everyone’s favorite stuff. However, I have a huge beef with shortcuts. Not in the case of people who need (and I mean need) to save money or really, really, really can’t cook. I’m talking about people who are totally capable of making a homemade side dish and have just gotten lazy.

1. Sometimes it’s actually cheaper to do something homemade. 2. Homemade always tastes better. 3. Thanksgiving is the one time a year when you shouldn’t be lazy! Do I want to celebrate a holiday with a super impersonal box of potato flakes and Stove Top when we can (and have) made real mashed potatoes and stuffing? No! Step it up, sloths! It’s f*cking Thanksgiving!

First Take: Sometimes home cooks decide they have all the time in the world and get real fancy with their Thanksgiving preparations. That’s when they bust out a homemade version of the aforementioned cranberry sauce. This is mostly a novelty; therefore, the same rules apply. A small spoonful should be politely taken, sampled, and complimented on to the chef. After that, feel free to abandon the stuff.

Second Opinion (Ashley Burns): I’m pretty tired of cranberries, to be honest. I don’t get what the big deal is with cranberries at all, let alone as a sauce that you’d mix with bird meat and other fruit-less side dishes. It’s just not a very tasty fruit. It’s like Mother Nature was setting aside rejected good, tasty berries and people started eating them, and she was like, “Eh, f*ck it. They don’t seem to mind.” Granted, I’ve always been a citrus guy, because I like to stay scurvy-free, but cranberries don’t taste good, and when they do they need to be mixed with something, like oranges or vodka.

So, maybe instead of cranberries, you serve something a little better — like more macaroni and cheese. Or be more adventurous and make a casserole out of Totino’s Pizza Rolls and taco ingredients. I guarantee that would taste better than cranberries and Guy Fieri would show up and declare your Thanksgiving dinner the best in the history of Flavortown.

First Take: If this dish has a top made so solidly of sugar and pecans that putting a serving spoon into it rivals cracking open the top of a creme brulee, dig in. But maybe save it to the end of the meal, because it’s practically dessert. Hey, they don’t call them sweet potatoes for nothin’!

Second Opinion (Steve Bramucci): I don’t know why people hate on these…with marshmallows, it’s the same concept as stewed peaches and cream. With sugar and pecans on top, it’s practically a pie. I love these sh*ts — particularly because I’d never make them myself. 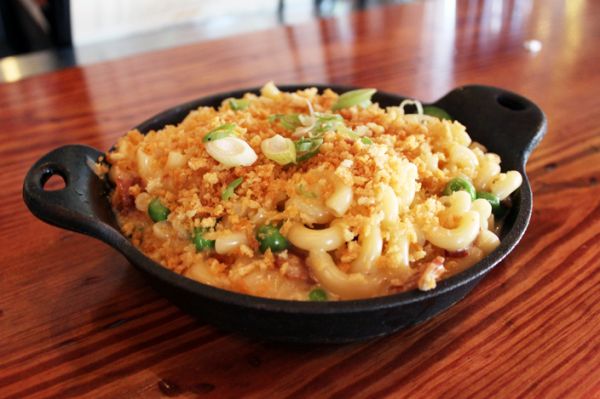 Our Take: Mac ’n’ Cheese on the Thanksgiving table is a pretty divisive subject, but one thing is for certain: It has to be homemade. If it’s there, go for it. Just don’t take too much—carbs and cheese fill, you know? Plus, you can always get Mac ’n’ Cheese the other 365 days of the year.

Second Opinion (Steve Bramucci): I would rather have Kraft macaroni and cheese than 90% of the things we’ve already mentioned and 99.99% of other options on the planet. So… yeah, have this. Always. For breakfast. For dinner. Always have it.

First Take: So, apparently, everyone would have been drinking hard cider at the first Thanksgiving. But wine, which has been making awkward political dinner-table outbursts bearable since the beginning of time, is where it’s at. Drink up, friend. (Unless you’re on the wagon or sensitive to sulfates, in which case, apple cider, hard or not, might be a better choice.)

First Take: Pumpkin pie isn’t even all that special and still yes, buried under whipped-cream and with a side of after-dinner coffee. There is always room for dessert.

Second Opinion (Steve Bramucci): No second opinion needed. If you’re not having pumpkin pie, why even have this holiday?