Watch These Divers Get A Surprise Visit From A Massive Sunfish

Ahhhh, the serene beauty of the underwater world. A joy to behold, a revelation of nature’s elegance, a — HOLY SH*T, WHAT IS THAT?

Off the coast of Portugal, a group of divers witnessed a rare treat when this jurassic-looking Ocean Sunfish or Mola Mola swam into view and coasted around for a few minutes.

The sunfish — which is the largest bony fish in the world and typically ranges between 545–2,205 pounds (thanks, internet!) — is rarely seen on open water dives. With very few natural predators and only a handful of nations hunting them as a delicacy (Japan, Korea, and Taiwan), the species resides in temperate waters around the globe, gliding around, feeding on jellyfish, and diving deep to chill (with Netflix, presumably).

Knowing that the sunfish isn’t dangerous might not console the #teamdryland crew. It’s still pretty scary when a fish the size of a Fiat comes out of f*cking nowhere. According to photographer Miguel Pereira, “when diving with a GoPro, I saw the giant Sunfish almost at surface level and practically static. The Sunfish seemed not to be bothered by our presence at all and followed us for 15 minutes.” 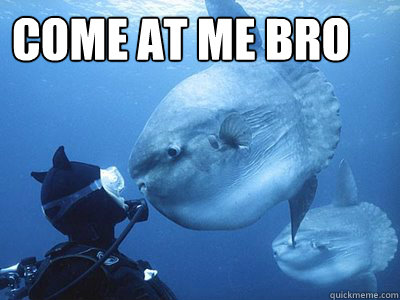