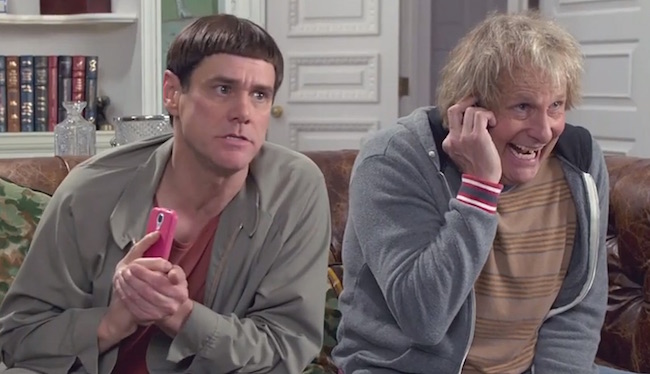 Granted, it’s kind of a weird question to ask 21 years later, and I’m sure it’s maybe explained on some sort of commentary track, somewhere. But the names Lloyd Christmas and Harry Dunne have both become such a part of the cultural zeitgeist that it feels odd to ask, “Where did those names come from?” But, ahead, Bobby Farrelly tells us how that happened.

In support of the Dumb and Dumber To Blu-ray release (which is currently available), we spoke to one half of the Farrelly Brothers directing team, Bobby Farrelly. Along with his brother, Peter, the two directed their first sequel, bringing back Jim Carrey as Lloyd Christmas and Jeff Daniels as Harry Dunne as the duo are on the road again, searching for Harry’s daughter — and it’ a movie that quietly wound up doing pretty well, grossing just under $170 million worldwide.

Ahead, along with the origins of Harry and Lloyd, Bobby Farrelly talks about the possible future of the now Dumb and Dumber franchise, plus he does a really great job trying to hide his disdain for the 2003 prequel, Dumb and Dumberer, which the Farrellys had nothing to do with and begged the studio not to make.

Looking at the domestic and international box office, this movie quietly did very well.

Yeah, we’re really happy with it. The marketplace always dictates a lot. And, with our movie, we came out one week after Interstellar and one week before the big Hunger Games movie. So, I think we got a little sandwiched in there, but we’re very happy with how it did.

With how much the marketplace has changed, who knows what the first Dumb and Dumber does against today’s franchise heavy movies?

But, you know, the original Dumb and Dumber, it did come out and it was good right out of the gate. But, really, the movie became a much more of a bigger movie in the 20 years since then because it was on TV so many times. And so many kids have seen it like dozens and dozens of times and know a lot of the lines by heart. Now, this movie, people have seen it maybe once. So, I’m hoping that as time goes by, they’ll watch it over and over because it becomes funny in a different way. The things we hear from the first one were not really what they were laughing at in the theater 20 years ago.

Like the Big Gulp line. That became popular later.

Exactly. People say, “Oh, what are the favorite lines?” It’s “Big Gulp” and, “So you’re telling me there’s a chance,” and all of those kind of lines. They didn’t get laughs right away. They did when you see it over and over and over, and that’s how Peter and I are with this movie. We’ve watched it hundreds of times in the editing room and we are always laughing at things that are different than what they’re laughing at when they see it the first time.

My favorite part is the vicious dog that Lloyd thinks is smiling.

[Laughs] That was good. That was all Jim. You know, I don’t have to tell anyone that. He’s a comedic genius. You know, it comes from the fact that he’s good-natured. He’s coming from a good place, particularly Lloyd. He means well and he thinks this dog is a friendly little dog that wants to take his head off. The things he doesn’t get is what makes him funny.

You know, where did the name Lloyd Christmas come from?

Well, it’s easier for me to tell you where Harry Dunne came from because Harry Dunne was the name of a guy who was a good friend of ours when we were making the first one. I said, “Hey, Harry. Do you mind if we use your name?” He said, “Ah, it would be great!”

We had the name Lloyd, and Lloyd’s a great name for a character. We didn’t know what to call him. I think it came up because when he fell in love with Mary, he’s like, “Mary. Mary Christmas. Boy, it’s got kind of a nice ring to it, doesn’t it?” There was something about that that made us laugh a lot. So, it became his last name.

Was this going to be part of the Mary Samsonite scene?

It was when we were writing, in the writing room. It was actually a scene, believe it or not, that was cut out and never made it into the original. He was envisioning himself with Mary and said, “Mary. Mary Christmas. Hmm. It’s got kind of a nice ring, doesn’t it, Harry?” “Yeah, it does.” They weren’t quite putting it together. But it made us laugh in the writing room, so that’s how it came to be.

I think Dumb and Dumber To will be popular on cable.

Well, I hope so. Because whenever you get Jim and Jeff on camera, there’s a lot of depth to their stupidity. You don’t see it all right away. Your eyes are going to go to whoever’s talking usually. If you watch it a whole bunch of times, you’ll start doing the opposite way. You’ll look at the guy who’s not talking and you’ll see something that’s actually funnier than what you thought was there in the first place.

People were worried that Jim Carrey and Jeff Daniels were too old, but the lines on Jim Carrey’s face almost give Lloyd a comedic sadness, that made it even funnier. Does that make sense?

It absolutely does. When the studio came to us years ago and they were going to make that silly prequel they made, we always felt like, “No, Harry and Lloyd are funny because they’re older guys who are that dumb.” They are little boys trapped in a man’s body. They never really grew up. To show them as younger kids, well, a lot of young kids are dumb. But when a guy like Jim now is around 50, or something, and he still talks like a 10-year-old boy in a way – he has that naiveté – I find that funnier.

I know you had nothing to do with the prequel you mentioned, Dumb and Dumberer, but I watched it for the first time the week Dumb and Dumber To came out. Oof. It doesn’t work.

In Dumb and Dumberer, we meet Harry’s mom and Harry’s parents are completely different in Dumb and Dumber To. Was that an intentional point to make, to distance yourself from the prequel?

You know what? That’s our bad because we never saw the prequel [laughs]. I think we just pretended that it never happened.

So, it wasn’t a conscious point or spite.

[Laughs] No, it wasn’t conscious.

If you guys had made Dumb and Dumber To, say, four or five years after the original, what would the story have been?

I didn’t know if you two were always informally work-shopping it over the years.

[Laughs] Every couple of years, we’d give it a moment’s thought, and honestly, years from now, I hope we can get the boys back together and do another one.