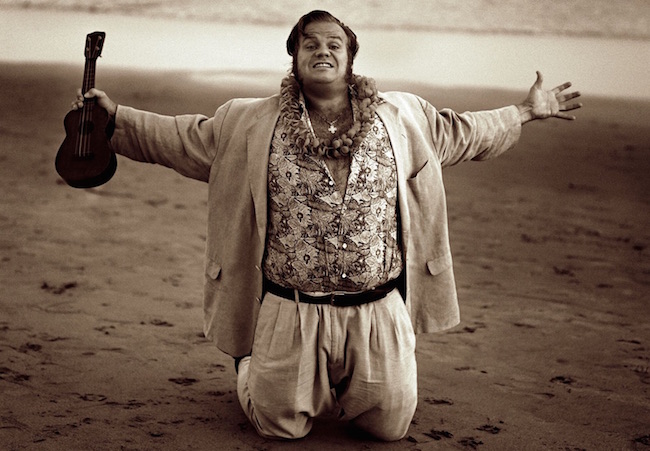 There are human beings alive who will vote in next year’s presidential election who were not yet born when Chris Farley was alive. Even 18 years after his death, I still half expected to see him pop up in a cameo during the latest Adam Sandler movie. He doesn’t feel “gone.” Even just a few years after John Belushi’s death – the person Farley is most often compared to – he felt like someone who belonged to a different era. Farley’s presence still feels strangely modern, which makes his overdose and death feel even more tragic all these years later.

The most damning/interesting moment of I am Chris Farley — a new documentary (that opens in New York this Friday, then VOD after that) that explores Farley’s life and death – is when Bob Odenkirk dismisses the whole notion of the mystique of Farley’s life of the party persona. Odenkirk looks equally sad and angry as he laments what that persona did for Farley in the end. It’s a powerful moment.

“It’s just rare that a person has that much joy and brings that much happiness to everyone around them,” Odenkirk says. “But, with Chris, there’s a limit to how wonderful it is to me. And that limit is when you kill yourself with drugs and alcohol. You know, that’s where it stops being so fucking magical.”

I am Chris Farley can be a frustrating film to watch for a couple of reasons. The most obvious is how watching the old clips – many that we’ve seen hundreds of times – inevitably makes us think about his unnecessary death. The realization of how much more we could have had from Farley over the last 18 years is a tough one.

The other aspect of frustration comes from the film itself – a film that has a specific narrative that it’s trying so hard to follow, almost fighting itself into being one thing while what we are seeing on screen is driving it into a different direction. The film wants to focus on the positive – Kevin Farley, Chris’s brother, is a producer on the film; it features numerous interview with Farley’s family – yet every time we see Sandler, Spade and Odenkirk on screen giving an interview, all we really see is their pain. It’s a really sad movie that is trying so hard to be upbeat and it shouldn’t have even tried.

There’s nothing inherently wrong about making a documentary about someone who has died and then framing the whole film in a positive light. But with Farley, it just still feels different. You can tell his close friends still have trouble talking about him. Spade comes off particularly sympathetic, admitting he still thinks about Farley at least once a day. By all accounts, Chris Farley was a good human being, but the topic of his life is a sad one. I understand that his family wanted to share stories about what Chris was like as a child and celebrate his whole life, but it’s so obvious that his friends still aren’t in that kind of a mood. Judging from these interviews, none of them are over it. I wish the film hadn’t fought so hard to steer away from that. The narratives of the interviews – the words we are hearing from his friends – are taking us in one direction while the film tries so desperately hard to take us somewhere… more pleasant.

The involvement of his family as producers – the film, kind of inexplicably, starts with Kevin Farley performing stand-up — is probably the film’s greatest downfall. Understandably, they’re going to want to focus on the more positives of Farley’s life, but his last days almost feel glossed over.

To be fair to everyone involved, I highly doubt the film would have secured such an impressive roster of talent – Sandler, Mike Myers, Lorne Michaels, Molly Shannon, etc. – had it been a more in-depth look. But this does feel almost like a greatest hits of Farley’s successes that most people who paid attention to his life will be pretty aware of already. (As much fun as it is to watch the Matt Foley, “van down by the river” and Chippendales sketches again, this is well-covered territory.)

I’m probably sounding overly harsh towards a film that has good intentions and is often very interesting. But I can’t stop thinking about Odenkirk. That was real emotion about his friend that he obviously misses and anger at what he did – what he took away from people. The trick to I am Chris Farley is finding the real subtext of what these people are saying, not where the film itself is forcing you to go. There’s Spade and Sandler marveling in an almost half bitter, half amazed way about how Farley never had to write anything on SNL. How it was all so easy for him because he was so gifted as a performer, people on the show would always write for him. He had it made and his colleagues all knew it. Then he was gone.

And now he’s been gone for 18 years and he’s still succeeding. I think they all know that and, in a way, it pisses them off that Farley isn’t here to enjoy it. I am Chris Farley wants to celebrate Farley’s life, but a lot of the people who knew him best don’t look like they’re in the mood to celebrate.