Friday Conversation: Who Is Your All-Time Favorite Movie Villain?

First things first: Jurassic Park is awesome. This isn’t really in dispute, but it’s worth mentioning anyway every now and then just to refresh people’s minds. I mean, Jeff Goldblum played a cool-ass math scientist in a leather jacket and a dinosaur blasted a kid with snot. What more do you people want? For the love of God, this was ART.

Additionally, the film featured my favorite movie villain ever: the giant Tyrannosaurus Rex that terrorized the park, as depicted in the scene above. Sure, other movie villains have had the luxury of things like “words” and “functional upper body appendages” and “motivations beyond just eating children and knocking over off-road vehicles,” but isn’t all of that overrated, really? Say what you will about someone like Hans Gruber from Die Hard, but it would probably take him hours to eat a whole person. Incredibly inefficient, in this reporter’s opinion.

Here are some favorites from the staff. Feel free to add yours in the comments.

Bill the Butcher is so good that the rest of Gangs of New York could be about Cameron Diaz starting an improv troupe and I’d still love it (I think I’m the only one who even remembers that she was in that movie). Him tapping the blade of his knife against his fake eye has to be the most badass villain move of all time. That accent, the pre-Gilded Age slang… it’s so perfect. I love that speech he’s giving where he’s reminiscing fondly about the guy who kicked his ass the best. “My face was pulp. My guts was pierced, my ribs was all mashed up. And when he came to finish me, I couldn’t look him in the eye. He spared me, because he wanted me to live in shame. This was a great man. A great man. So I cut out the eye that looked away, I sent it to him wrapped in blue paper. I would’ve cut them both out if I could have fought him blind. And I rose back up again with a full heart… and buried him in his own blood. He was the only man I ever killed worth remembering.”

He’s almost literary, except on the page, we never would’ve gotten to see that scene where he and his buddies are strutting around in top hats with ridiculously patterned slacks, with competing loud vests and canes, probably my favorite costume design of all time. It’s a great villain that can be terrifying while looking like he skinned your grandma’s couch. 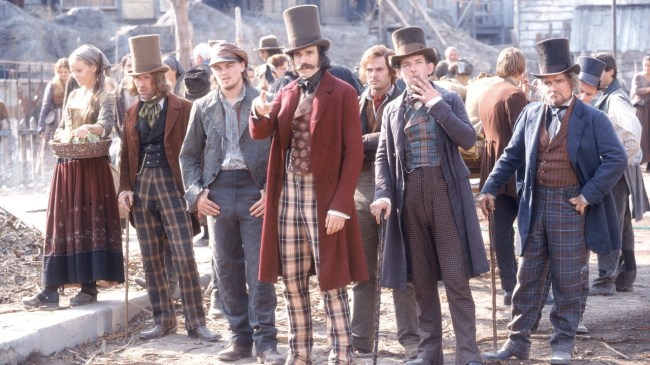 Jaws, played by Richard Kiel, from the Bond movies. I had recurring nightmares when I was a kid about that guy, specifically that he was trying to bite off my nose as I desperately tried to push him away. I still get a little freaked when I see him.

Let’s put aside the FACT that Big Trouble in Little China is the greatest movie of all-time for just a second and try to look at this through unbiased green eyes. Lo Pan is two bad guys in one, spending his days as a crotchety old man in a wheel chair, running the Wing Kong and waiting for the right girl to come along. That girl, of course, is the rarest of the rare – a Chinese girl with green eyes. Once he has her, he can undo the curse that has burdened him for so long and rise again as a sorcerer that will conquer the world, with the help of his Three Storms. Sure, he’s undone by a fast-talking, hapless truck driver with a boot knife, but you know what ol’ Jack Burton says at a time like this? What the hell.

Buddy Ackerman, Swimming with Sharks (1994) — People don’t talk about one of the most underappreciated movies of the 1990s enough, because Swimming with Sharks kind of got lost in all the Tarantino and Pulp Fiction hype of 1994. However, Sharks was one of the sharpest, cruelest, most vicious Hollywood satires of the decade. In it, Kevin Spacey plays Buddy Ackerman, a kind of cross between Alec Baldwin in Glengarry Glen Ross and Meryl Streep in The Devil Wears Prada, a studio executive who is viciously mean to his personal assistant, Guy (played by Frank Whaley). Buddy bullies, humiliates, abuses, and cruelly taunts Buddy so much that Buddy eventually breaks and kidnaps and tortures his boss until one of the film arrives at one of the most f*cked-up, dark twists you’ll ever see. Spacey is electric in this film, and it still remains my favorite of all of his performances.

This might not be my favorite movie villain, but it’s at least the one I thought of off the top of my head: John Heard’s character in Big. Now hear me out here. He was such a dick to Tom Hanks! OK, I guess that’s my only argument, but he was really good at being a dick. He also taught us a little something about finding joy in life, because in the end Tom Hanks got the promotion and the girl. Which was … weird. I still will always love that movie though.

This is low-hanging but I have to be true to myself because that’s just the sort of person I am. Keyser Söze is the answer. There’s probably a direct correlation to the number of times I’ve watched The Usual Suspects, but even pretty much knowing the film by heart I still get all geeked out at the end. The build up, the pitch perfect reveal. “Chazz Palminteri, you f*cking sucker!” Oh man, it never gets old. And Kevin Spacey is an OK actor, I guess.

I kinda feel bad calling Ed Rooney a villain. Jess made the case that Rooney was just an educator doing his job on the Thanksgiving episode of New Girl this year, but despite the righteousness of his cause, he came to symbolize the bland and cold authority figures that 80s and 90s kids were taught to mock and thwart by smart-ass heroes like Bueller, Zach Morris, and every character that Bill Murray played for the first 25 years of his career. If forced to choose, I’m always going to side with the smartasses and their continuing problem with authority, so eat it, Rooney.

The O’Doyles from Billy Madison. A family of ginger-mopped heathens doesn’t acquire a mantra like “O’Doyle Rules!” without… well, okay, they probably gave it to themselves. But if they didn’t? Pretty awesome.

My dad likes to tell/mock me that when I was six, we saw Dennis the Menace and I wanted to leave midway through the movie, not because it was terrible (it is!), but because I was TERRIFIED of Christopher Lloyd’s character, Switchblade Sam. He’s my Freddy Krueger.

This might strike some as odd and tame, but I keep coming back to Alfred Molina’s Otto Octavius in Spider-Man 2. He was, by far, NOT the badassiest, most evil supervillain in a movie ever, but that’s what made his villainy so upsetting to me. This was really the first time I watched a movie about a good guy, a brilliant man who acquired power, experienced a devastating accident, and made terrible, terrible decisions that harmed people and caused mass destruction. Octavius lost himself in power when he lost control, and I think that’s at the root of so many bad guys — they seek out power when they feel powerless and then misuse it. But he was such a compelling character because he was so tragic. He was still so human, and I thought that was really kinda beautiful. Doc Oc was an utter train wreck and I couldn’t look away. Maybe I’m a softie, though. Or maybe I’m just a writer.