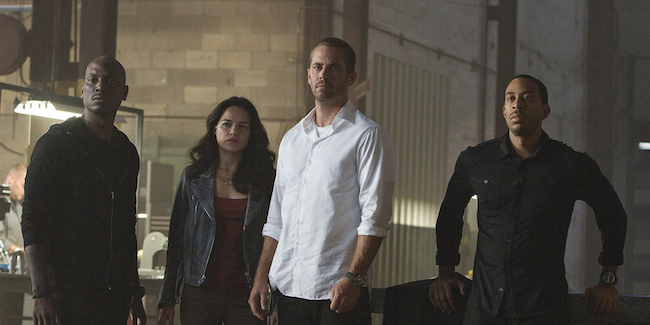 James Wan, up until now, has been best known for directing the first Saw film and 2013’s breakthrough horror film, The Conjuring. Wan had carved out his niche as a horror director who had success turning modest-budgeted movies into big moneymakers. (His Saw film grossed over $100 million on just a $1.2 million budget.) So that’s why it was a bit of a surprise when Wan was tapped to take over one of Hollywood’s most financially successful — and expensive! — movie franchises.

With Furious 7, there was enough pressure just to keep this behemoth of a franchise going after previous director Justin Lin had metamorphosed the series from a street racing series set in Japan (Lin’s first film was The Fast and the Furious: Tokyo Drift) to a franchise that, by the time we got to Fast & Furious 6, more resembled the Mission: Impossible movies. Then, in November 2013, series star Paul Walker was tragically killed in an automobile accident that was unrelated to the film which, with Walker’s scenes not yet complete, threatened to permanently derail the film’s production.

The new director not only had to deliver a film that lived up to the past films, he had to rally a mourning crew and deliver what would turn out to be a poignant goodbye to a beloved actor under the most difficult of situations. The last ten minutes of the film serve as that goodbye. Filmed after Walker’s death, with the help of Walker’s two brothers and some digital manipulation, these scenes are a goodbye to both Walker and his character, Brian O’Conner. These scenes are still difficult for James Wan to watch.

We spoke to Wan about the trials of making Furious 7, how working with Paul Walker’s two brothers to finish the film brought closure, and if Wan is up for returning for a Fast and Furious 8.

Let me just say this: I made the movie, I edited the ending I did the music and I cut it all together – and yet I still cry as well. The ending just really, really gets me every time I see it.

It really hits you that this is the last time we’ll see Paul Walker.

Listen, I hear you, man. It truly is a testament to how much people love Paul. It truly is. He’s so beloved and for all the right reasons. People love him because he was a great guy; he truly was. And what I love about Paul was, here’s a guy who is in one of the biggest Hollywood franchises ever and yet he doesn’t act remotely like a Hollywood person at all. That’s what I love about him. He’s so down to Earth and he was so real. I feel very fortunate to have worked with Paul because, before this, it’s like everyone, it’s like, “Oh, yeah, I dig Paul; I like the movies.” But, having worked with him, I admire him so much more and I truly, truly love the guy. It saddens me in a big way to know that he’s not with us anymore. And we worked so hard to make a movie that he would be proud of.

What you did with the ending, you threaded a needle. That could have easily not worked.

How conscious were you of that?

I would say, our aspirations were in the right place. But we might not be able to pull it off from a technical standpoint, right? But, listen, hats off to my incredible post-production team of editors and visual effects team – all of us just wanted to do something that he would be proud of.

And his brothers helped out too, right?

Yeah. Definitely, yeah. We used basically Cody and Caleb and another actor, John Brotherton, to help fill in the gaps. And I think it was very important to use his family to finish off the movie, because it meant that the cast – the team of Vin and everyone else had such a hard time continuing on without Paul – but having the family there meant that, in some ways, they get to act with Paul in some respect. And that provided a lot of closure for my actors. And I know it really did for the family as well that they were able to help Paul out one last time and get to say goodbye to him one last time by doing this.

As a director, especially taking over for another director who had been with this cast for four movies, you were put in one of the most difficult situations imaginable.

Listen, the biggest compliment I take away from all of this is the fact that I helped to land a plane that is on fire, basically. More than anything else, that’s what I feel proud of and I feel proud of what I did for Paul and that’s the bottom line. After that incident, it became very clear to all of us that he had to finish this movie. We had to finish it for Paul.

You’ve been a director who has had a lot of success working with small budgets. Can it be daunting to have such a large budget?

No, actually! If anything, it’s super exciting. My entire career I’ve been wanting to make movies with big budgets and it just so happens that I’ve been so successful in the independent world that people don’t realize or see me as a guy that needs a big budget to make a successful movie – which kind of annoys me [laughs]. So, this movie really affords me a big canvas to paint with, which is what I love. And pretty much anything I can think of or cook up or design, I have the budget and the resources and the technicians to help me make it work. And it’s super exciting from that perspective.

What was the most difficult sequence to pull off? There are five different scenes you could say right now and I wouldn’t be surprised.

Well, a lot of the sequences in the movie were really big and challenging. I would say, you know, one that I definitely wanted to make sure it was right — because the concept is so larger than life – is the cars falling out of the back of the plane. The concept is so big that if you don’t get it right, it could kind of kill the film. And I knew I wanted to make it exciting and thrilling and fun, but you also feel the danger as well of what they’re doing. And that truly is a combination of a whole bunch of filmmaking techniques — from doing practical stunts of actually throwing cars out of the back of a plane to incredible visual effects.

You really threw cars out of an airborne plane?

No, man, we threw those cars out of the back of a plane twice! In the air. We took them out to the Arizona desert and we had skydivers chasing after them. So, there’s that factor and the factor of filming the actors as well in giant rigs that simulate what is happening. Because, you know, you can’t throw actors out of the sky at 10,000 feet in the air, for some reason.

You should get Tom Cruise. He’ll do it. In the new Mission: Impossible trailer, he’s attached to an airplane as it takes off.

I think it needs to be that because I think that’s part of the secret to the longevity to the franchise – is being able to grow with it and grow with the audience and grow with the changing climate around us. I don’t think you can kind of do the same exact movie that was made 15 years ago. And there are not that many franchises out there that has such a diverse looking bunch of actors in front of the camera.

Do you want to do another Furious film?

Well, my next movie I have is Conjuring 2, but I am definitely open to anything after that. I’ll put it that way.