Alfred Hitchcock—master of suspense and… fearer of eggs. In a 1963 interview with Oriana Fallaci, Hitchcock declared himself one of “the most fearful and cowardly men you’ll ever meet” and, as proof, he offered up his ovophobia. “That white round thing without any holes, and when you break it, inside there’s that yellow thing, round, without any holes…. Brr!”

In the Fallaci interview, Hichcock also claimed to be frightened of his own movies and to hate suspense; he couldn’t stay in the kitchen when his wife made a soufflé (apparently, eggs in soufflés are okay) because the pressure of whether or not it would rise was too much for him.

Although a self-proclaimed chicken and a little cracked (all the egg puns!), Hitchcock knew suspense in a way unmatched by most film directors and, because of that, his work stays alive in the projects of other artists. Check out some of the best and also the most unexpected Alfred Hitchcock homages in pop culture on this, the day that would have been his 116th birthday.

“Bad Romance” and “Born This Way”

She doesn’t just bring him in for lyrics, the opening of “Born This Way” samples the theme music for Vertigo, which is ironic since that movie is all about a woman being someone she wasn’t born to be.

If you haven’t watched Big Train, but you love British sketch comedy, finish this post and get to YouTube. The show sets up normal situations only to have them become absurd. For example, in this send-up of The Birds, a quiet smoke in the park turns into a moment of horror as the heroine is faced with…gasp…the working class.

Yes, that is Simon Pegg pecking at her. If you binge U.K. TV, you will know a lot of the actors on Big Train.

That Mitchell and Webb Look

Continuing in the vein of sketch comedy, take a look at this parody of the Hitchcock classic Rebecca; the basic premise of the entire story is turned on its head. That Mitchell and Webb Look features David Mitchell and Robert Webb as a variety of characters. Check out David Mitchell as Mrs. Danvers.

This show has paid homage to Hitchcock over and over again. To select one episode is a ludicrous task, but it’s worth an effort. The Hitchcockiest moment is arguably the “Dial “M” for Murder or Press “#” to Return to Main Menu” installment of “Treehouse of Terror XX,” the annual Halloween show’s 2009 edition. In the segment, Bart convinces Lisa to trade crimes, a la Strangers on a Train,and there are send-ups of Dial M for Murder, Vertigo, North by Northwest, Psycho, The Birds, Spellbound, and Alfred Hitchcock Presents. 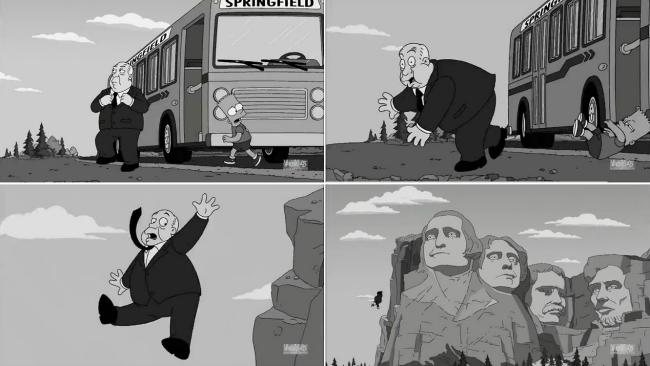 Halloween on FOX is clearly the superlative occasion to roll out the Hitchcock references. Kelso actually starts the show by musing, “You know what would be fun is if we were in an Alfred Hitchcock movie right now.” Bring on the homage! Eric develops vertigo, Fez is laid up with a twisted ankle and ends up spying on the neighbors because he thinks Bob killed Midge (a popular tribute to Hitchcock that was also done by Castle), Kitty is attacked by crows, and Kelso is mistaken for Red, chased by a toy airplane, and attacked in the shower. You get Vertigo, Rear Window, The Birds, North by Northwest, and Psycho homages all in under a half an hour.

In the final episode of season four, Psych revisits an earlier plot (the Yang killer) and packs it with a ton of Hitchcock moments.

The episode opens at a showing of Psycho; Shawn arrives late: “Let me guess: dude has a creepy voice and a mommy complex. All I care about is the shower scene. Wait for iiit…” What follows is a tight episode with a few red herrings and an excessive stick shaking amount of references: including Frenzy, Vertigo, Rear Window, Psycho, The 39 Steps, North by Northwest, The Birds, Lifeboat, Marnie, and The Man Who Knew Too Much. Whew.

Like The Simpsons, Pretty Little Liars pays frequent homage to Alfred Hitchcock. He is most often evoked in season closers, but the name of the coffee shop the girls frequent is Rear Window Brew (even if they always call it The Brew), so Hitchcock is never completely absent. The big homages are to Vertigo (Ian and Spencer in the bell tower), Psycho (Mona’s breakdown and the Lost Woods Resort), and Rear Window (Hanna and Toby in wheelchairs).

This Mel Brooks feature references Psycho, Vertigo, The Birds, Dial M for Murder, The 39 Steps, Foreign Correspondent, Saboteur, Rear Window, North by Northwest, and Rebecca, making it the homagiest entry in the list. This film marked Brooks first as a producer and his first speaking lead role. In addition, he actually worked with Hitchcock on the screenplay, making this an Alfred Hitchcock approved homage. For Hitchcock fans, this is a great film to watch for references, but it also works for non-Hitchcock experts as well. Cloris Leachman and Madeline Kahn work for everyone, right?